Top Democrats in the House and Senate continued Sunday to press for acting Attorney General Matthew Whitaker’s recusal from the Mueller investigation over his remarks criticizing the probe.

In a letter sent to the Department of Justice’s top ethics official, California Rep. Nancy Pelosi, New York Sen. Chuck Schumer and five leading committee Democrats asked whether Whitaker was advised to recuse himself from the investigation.

“There are serious ethical considerations that require Mr. Whitaker’s immediate recusal from any involvement with the Special Counsel investigation of the Russian government’s efforts to interfere in the 2016 presidential election,” reads the letter, which was sent to Assistant Attorney General Lee J. Lofthus.

“Regrettably, Mr. Whitaker’s statements indicate a clear bias against the investigation that would cause a reasonable person to question his impartiality.”

The Democrats pointed to remarks that Whitaker made in 2017 when he ran the Foundation for Accountability and Civic Trust (FACT), a conservative non-profit group. Whitaker was hired as Jeff Sessions’s chief of staff, reportedly after President Donald Trump saw him on CNN criticizing the Mueller investigation.

“The official supervising the Special Counsel investigation must be — in both fact and appearance — independent and impartial,” reads the letter, which was signed by Pelosi, Schumer, Adam Schiff, Mark Warner, Dianne Feinstein, Jerold Nadler and Elijah Cummings. 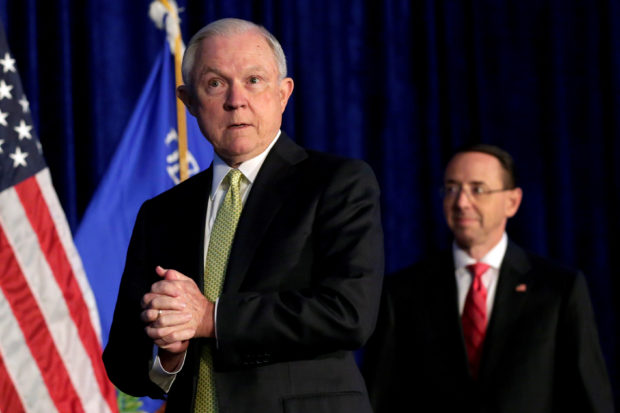 Trump forced Sessions to resign Wednesday. Trump has been heavily critical of Sessions’s decision on March 2, 2017, to recuse himself from the Russia investigation. That move allowed the Deputy Attorney General Rod Rosenstein to oversee all investigative decisions. He appointed Robert Mueller, a former FBI director, as special counsel on May 17, 2017. (RELATED: Who Is Matt Whitaker?)

While working at FACT, Whitaker gave interviews in which he cautioned that the Mueller probe would cross a “red line” if the investigation began digging into Trump’s finances. He has suggested that one way to end the special counsel’s investigation would be not to fire Mueller, but to sap investigators’ resources by cutting funding.

Democrats also asserted that Whitaker has a conflict of interest because of his relationship with Sam Clovis, a former Trump campaign official who has appeared as a witness before Mueller’s grand jury.

“Mr. Whitaker’s relationship with Mr. Clovis, who is a grand jury witness in the Special Counsel investigation, as well as Mr. Whitaker’s other entanglements, raise additional concerns about his ability to supervise the investigation independently and impartially,” reads the letter.

Whitaker, a former U.S. attorney from Iowa, has reportedly said he has no plans to recuse himself from the probe.