The chair of the lay group that advises the U.S. bishops on addressing sexual abuse said Wednesday that some U.S. bishops need to resign.

Francesco Cesareo of the National Review Board told the U.S. Conference of Catholic Bishops  (USCCB) that some of them needed to resign, of their own accord, in order to help the U.S. church heal from wounds caused by abuse and a breach of trust between the bishops and the laity.

Cesareo hailed Bishop Robert Morneau’s Sept. 19 voluntary withdrawal from ministry and acceptance of responsibility for his failures to prevent abuse as an example of what certain bishops must do. (RELATED: Cardinal Cupich Claims Some Clerical Offenses Were Consensual Sex Between Adults And Should Be Handled Differently) 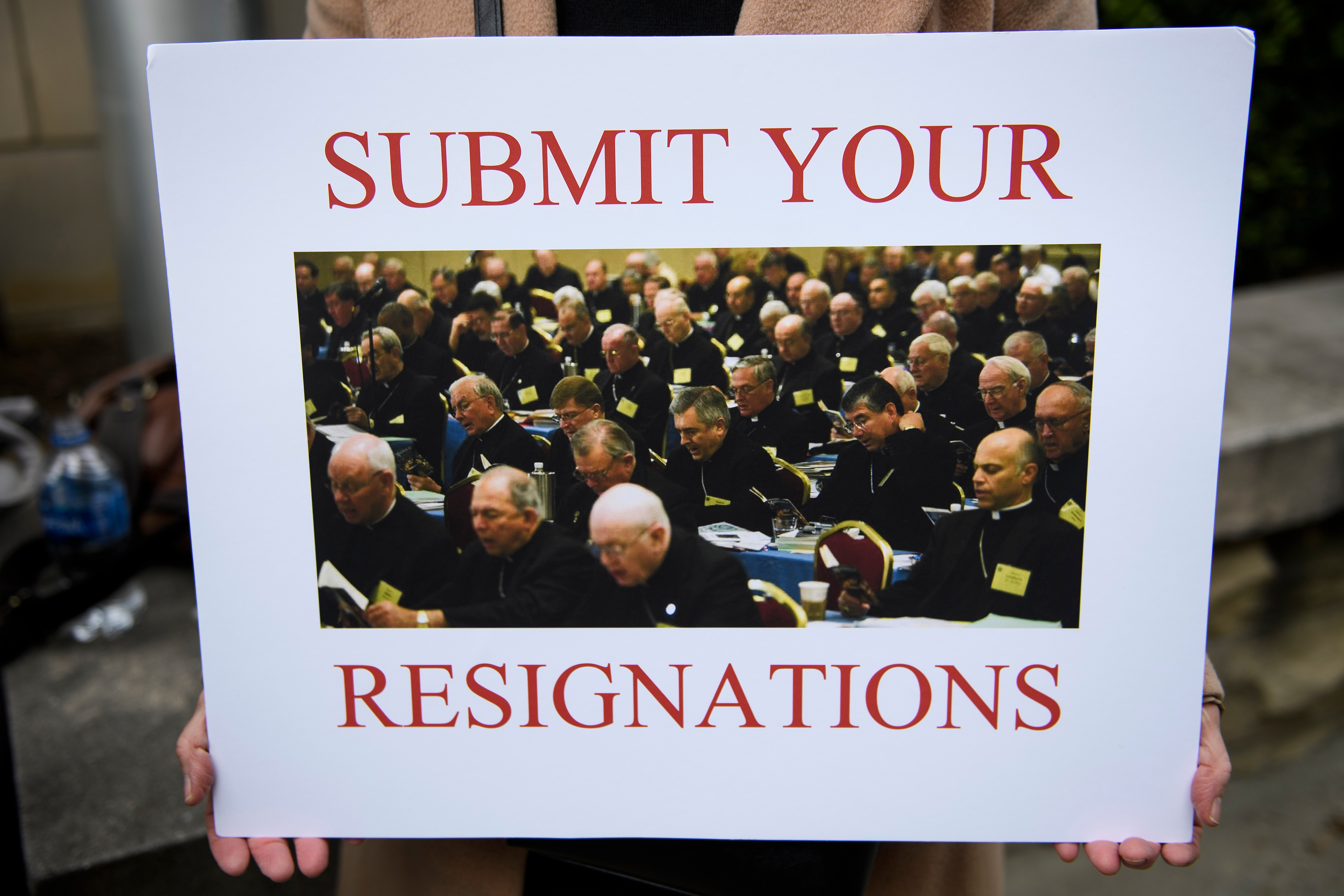 A protester holds a sign during the annual US Conference of Catholic Bishops November 12, 2018 in Baltimore, Maryland. ( BRENDAN SMIALOWSKI/AFP/Getty Images)

“A Grand Jury report or a canonical proceeding did not force him to withdraw. He did so because his conscience dictated such action. Bishop Morneau’s actions exemplify those that some of you must take to restore trust and allow the deep wounds caused by the current crisis to heal,” Cesareo said.

Francesco Cesareo, chair of the U.S. bishops advisory panel on abuse, says that some bishops must resign pic.twitter.com/1dXEglr7sx

Cesareo’s address echoed similar calls for the bishops’ resignations from Catholic faithful who gathered at the End Silence Now rally across from the USCCB’s meeting from Monday to Wednesday.

“I don’t think the church would miss a beat if they all resigned,” said demonstrator John McKeon, according to The Catholic Register. “There are many ways to serve the Lord – they don’t have to be a bishop.”

Other protesters carried signs sporting pictures of the bishops and text reading “Submit Your Resignations” and “Resign & Help Scicluna To Investigate.”

The bishops have come under heavy criticism since the release of Pennsylvania’s grand jury report on sex abuse that identified over 300 predator priests in just six dioceses and unveiled systematic cover-ups orchestrated by church officials. Subsequent revelations of similar abuses from dioceses across the nation, the abuses perpetrated by former Cardinal Theodore McCarrick,  and the Vatican’s order for the USCCB to halt their adoption of reforms to address sexual abuse fanned the flames of that criticism, leading to calls for the resignation of bishops like Richard Malone of Buffalo.

Prominent Catholics in D.C. and abuse victims’ advocacy groups also demanded the resignation of Cardinal Wuerl as archbishop of D.C. for his complicity in protecting predatory priests in Pennsylvania and his alleged failure to address McCarrick’s abuses. Wuerl resigned, but was praised by Pope Francis for his service, to the chagrin of abuse survivors’ advocates, and appointed him as the apostolic administrator of the archdiocese.