BBC, the world’s oldest national news broadcaster, aired specials on global warming and environmental issues before, but that’s not enough for activists with the group Extinction Rebellion.

Hundreds of activists stormed eight BBC locations across the U.K. and Berlin, Germany, according to Extinction Rebellion. The group sent a list of demands to BBC on Sunday, including a meeting with BBC director general Tony Hall “to discuss how the BBC can tell the full truth on the climate and ecological emergency.”

The group’s list of demands also included treating global warming “at the level of urgency placed on informing the public about the second world war.” The letter demands BBC “[declare] a climate and ecological emergency.”

Extinction Rebellion protestors outside the BBC Bristol office, have chained themselves to the gates, making a list of demands & calling on the BBC to improve coverage of climate change. No arrests so far. pic.twitter.com/fNf7TUjSNz

Extinction Rebellion made headlines recently after dozens of its members were arrested for blocking five London bridges over global warming. The group plans on escalating its “direct action” campaigns across Europe.

“[W]e’re facing a potentially existential threat to both our nation and our species, but the BBC’s coverage is nowhere close to reflecting this,” Serena Schellenberg of Extinction Rebellion said in a statement.

BBC headquarters in London was locked down Friday afternoon, The Guardian reported. BBC staff were unable to enter or leave the building as protesters carried signs warning of a “climate crisis.”

Went with my 2yo daughter to #ExtinctionRebellion London #ReclaimtheBBC protest. Please BBC, for all our sakes, give #ClimateBreakdown the extensive coverage it deserves and don’t give a platform to deniers. #Tellthetruth pic.twitter.com/1vmH0FY8TB

#ExtinctionRebellion #London #BBC can you hear us?! pic.twitter.com/kUfPJ939HN

Environmentalists targeted BBC in recent years for allowing global warming skeptics on air. Increasingly, activists and left-wing pundits are calling on news outlets to exclude those who disagree with them on climate change from coverage.

The BBC defended its record on covering global warming and environmental issues. (RELATED: Democrats Are At Each Other’s Throats Over An Issue That Barely Got Mentioned In The 2018 Elections)

“The BBC has a proud record of leading the way in sustainability in the media industry and we’ve set out further action including cutting energy use further, eradicating single-use plastic and minimising the impact of necessary travel,” a BBC spokesperson told The Guardian.

“In the last charter period, we reduced our carbon footprint by a third. People can also see the clear impact programmes like Blue Planet II and Dynasties have had on public debate about the impact of humankind on the planet,” the spokesperson said. 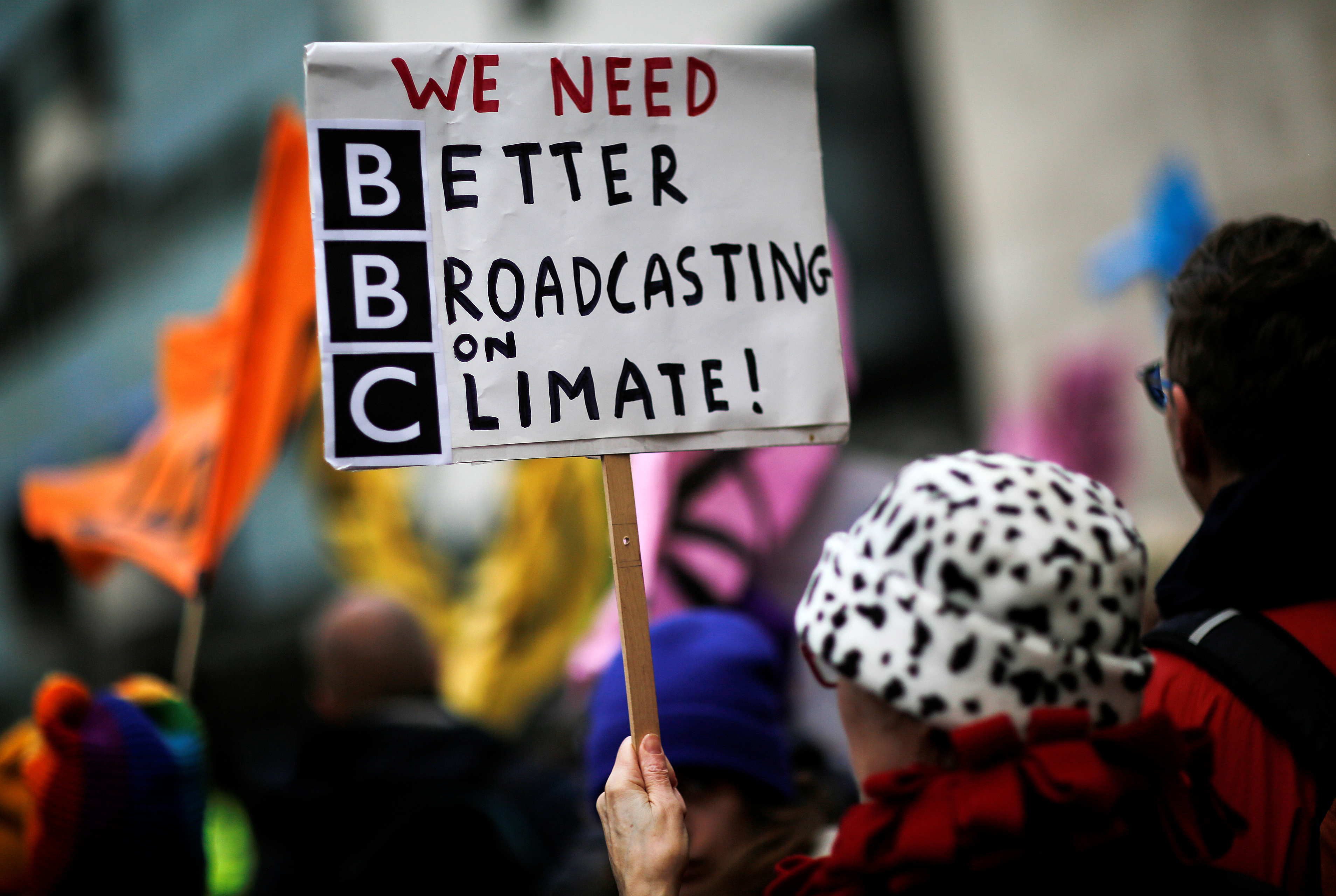 Indeed, BBC angered skeptics and those who disagree with the political left on global warming by directing its reporters in September to not include them in news coverage.

Extinction Rebellion’s BBC protests come after unidentified persons used drones to halt air traffic at one of Europe’s busiest airports — London’s Gatwick airport. Environmental activists are among the list of suspects police say could have been behind the drone blockade.

1
'If Anybody Needs To Be Fact-Checked, It's The Media': Kayleigh McEnany Unloads On Jim Acosta
Media
2
Armed Citizens Stand Guard Against Looters In Minneapolis
US
3
NBC Bans Reporters From Using The Word 'Riot' In Coverage Of Minnesota Riots
Media
4
‘The Five’ Panel Explodes When Donna Brazile Claims There’s ‘No First Amendment Right To Lie’
Media
5
George Floyd Protesters Attack Old Woman In Wheelchair While Looting
US