Border Patrol agents know exactly what they want in a border wall, and every mile varies.

Immigration experts tell The Daily Caller that President Donald Trump’s vision for a border barrier is informed directly by the requests of Border Patrol agents.

Trump tweeted one day before the partial government shutdown that he was looking into building a “steel slat barrier” that is “totally effective.” The tweet sparked endless media stories and mockery about how Trump was backing down on his campaign promise of a concrete border wall.

A design of our Steel Slat Barrier which is totally effective while at the same time beautiful! pic.twitter.com/sGltXh0cu9

“Whatever you want to call it, it’s all the same,” Trump also said, seemingly softening his stance on the “wall” amid efforts to make a deal with Democrats.

Immigration experts, however, tell The Daily Caller that Trump has embraced new ideas about what kinds of barriers will be effective on the border after viewing various prototypes and speaking directly with Border Patrol agents on the ground. They also make clear that Trump’s newfound focus on “steel slats” does not mean that a concrete wall is now completely obsolete.

There is “not a one-size-fits-all” approach to a border barrier, former acting Immigration and Customs Enforcement (ICE) director Thomas Homan told TheDC in a phone interview.

“There are different types depending on the terrain,” Homan explained, adding that steel slats are one of many options because “guys on the ground like the option of seeing through the other side.”

One person familiar with the administration’s border policy similarly made clear that proposed barriers are “not uniform” across the border and are dependent on what Border Patrol agents say they require in their respective zones. 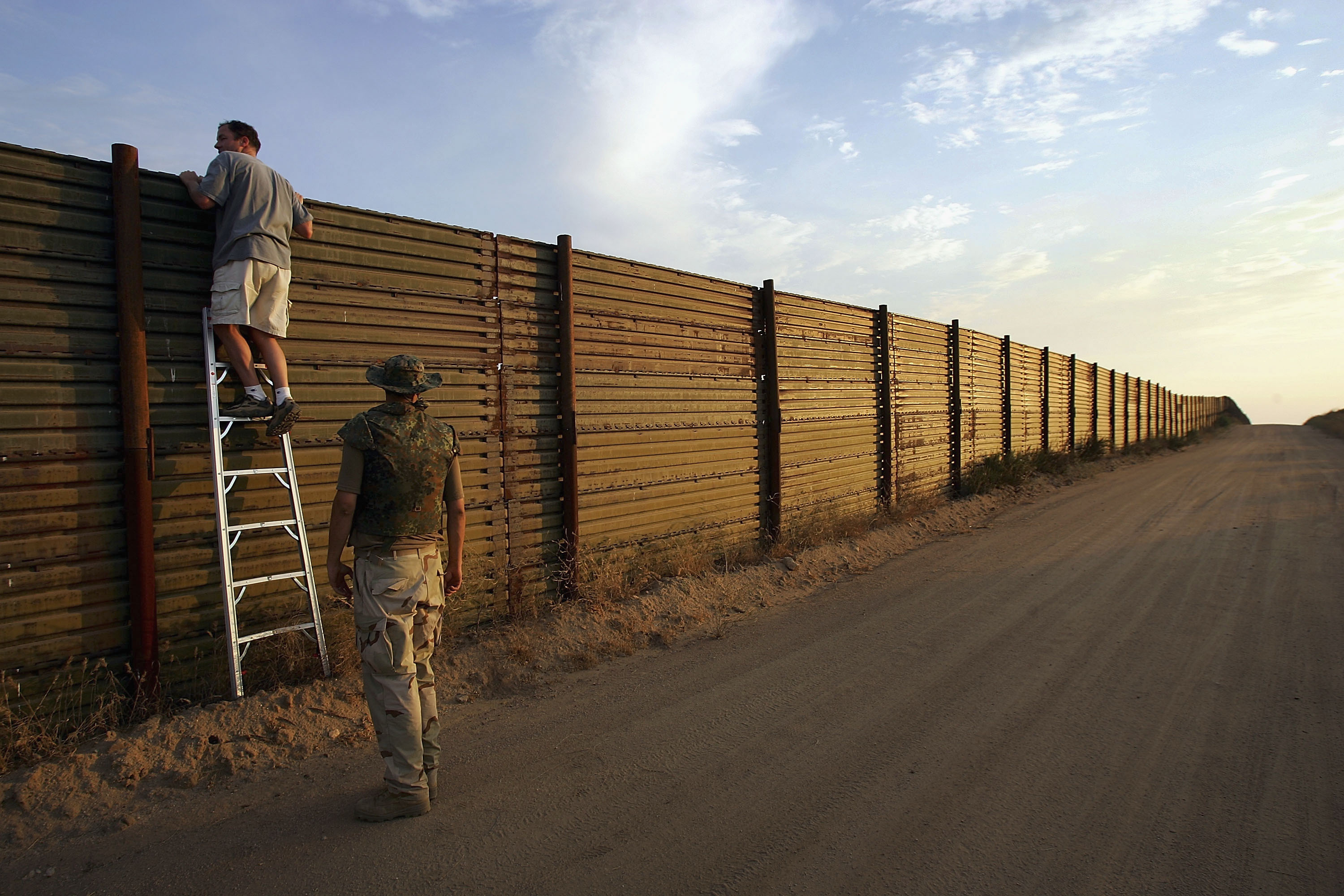 CAMPO, CA – JULY 19: Volunteers look over the US-Mexico border fence to see how illegal border crossers may jump the fence before going on the nightly patrol by citizen volunteers searching for people crossing into the US illegally from Mexico on July 19, 2005 near Campo, California in eastern San Diego County. (Photo by David McNew/Getty Images)

For example, areas near the Rio Grande river that are prone to flooding may require a concrete wall similar to Trump’s original campaign proposal, while drier areas like Calexico, California would be better served by a fence. The height of physical barriers would also vary depending on how highly trafficked border sections are.

Customs and Border Protection Commissioner Kevin McAleenan noted in an interview on ABC’s “This Week” that the $5 billion the president is requesting in the shutdown battle would pay for more than just “a dumb barrier.” (RELATED: Mark Meadows Says Trump Will Not Budge On Requested Amount For Border Funding)

“It’s about 215 miles of wall system,” McAleenan said, adding that the money would also pay for technology such as sensors, lighting and cameras.

Democrats have seized on Trump’s tweet about steel slats to accuse him of breaking his campaign promises about the wall. House Minority Leader and soon-to-be Speaker Nancy Pelosi joked last week that Trump’s wall has turned into a “beaded curtain.”

While the president scoffed at the idea of his wall being conflated with a fence during the 2016 presidential campaign, administration officials and immigration experts now say that the wall is a euphemism for any type of border barrier.

“The wall is a barrier. The president’s words are being taken out of context,” Homan asserted. “Democrats don’t have a good argument against a border wall, so they pick on the president’s terminology … Democrats are refusing to fund a barrier because they don’t want Trump to win.”

“There may be a wall at some places, there may be steel slats, there may be technological enhancements,” White House adviser Kellyanne Conway said in a recent “Fox News Sunday” interview. “But always saying ‘wall’ or ‘no wall’ is being very disingenuous.”

Former Chief of Staff John Kelly knocked Trump’s wall in an exit interview with The Los Angeles Times, stating, “To be honest, it’s not a wall.”

Kelly also admitted, however, that the shift away from a concrete wall is primarily due to the administration asking “people what they needed and where they needed it” rather than the president shamelessly giving up on a campaign promise.

“To be honest, it’s not a wall,” Kelly said. “The president still says ‘wall’ — oftentimes frankly he’ll say ‘barrier’ or ‘fencing.’ Now, he’s tended toward steel slats. But we left a solid concrete wall early on in the administration when we asked people what they needed and where they needed it.”