French President Emmanuel Macron’s decision to get tough on citizens protesting his government appears to have backfired as members of the yellow vest movement take to Paris’ streets.

Some protesters threw haymaker punches at baton-wielding police officers while other agitators lit cars on fire outside the Champs Elysees. Much of the sting from the yellow vest protests, which began in November, had dissipated after Macron pulled back on an unpopular carbon tax.

But protests are firing back up with renewed intensity. They began surging again after Macron promised in a New Year’s Eve address that his administration will take a hard line against future protests. (RELATED: Macron Equates Yellow Vest Protesters To A ‘Hateful Mob’ Targeting Jews And ‘Homosexuals’)

Some believe these protesters “take as a pretext that they are speaking in the name of the people” when “in fact they are merely speaking for a hateful mob” that targets “police, journalists, Jews, foreigners, homosexuals,” Macron stated during a Dec. 31 address.

The French president’s comments came weeks after he moved to eliminate a gas tax that originally animated the mob. 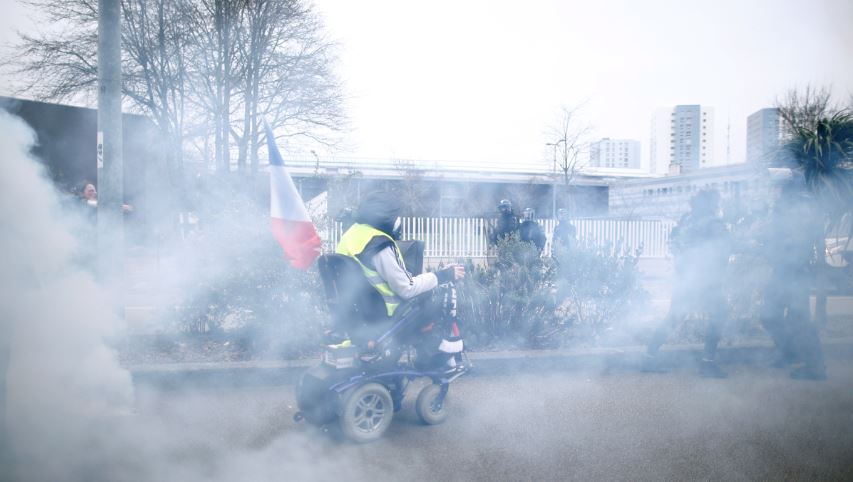 A protester in a wheelchair watches as another protester clashes with riot police during a demonstration of the “yellow vests” movement in Nantes, France, Jan. 5, 2019. REUTERS/Stephane Mahe

Greenpeace and three other organizations initiated a lawsuit on Dec. 18 claiming France is not doing enough to tackle climate change. They are giving the government two months to formulate a response, after which they will move forward with their lawsuit.

Riot policemen run near a fire during a demonstration by the “yellow vests” movement at Boulevard Saint Germain in Paris, France, Jan. 5, 2019. REUTERS/Gonzalo Fuentes

He began fleeing from his office less than a day later as protesters invaded the courtyard and smashed up several cars. “It wasn’t me who was attacked,” Griveaux later told reporters. “It was the Republic.”

Macron, a former banker who citizens have branded the president for the rich, echoed a similar sentiment in a tweet Sunday to his followers. “Once again, the Republic was attacked with extreme violence – its guardians, its representatives, its symbols,” he said.