It has been a year since New York City kick-started a climate lawsuit against ExxonMobil over the company’s alleged contribution to global warming. The litigation has had a bumpy ride ever since.

City officials appealed the federal court’s decision in July to toss out the lawsuit after a judge argued that the case bypassed several federal law doctrines. Exxon and the other oil companies subject to the lawsuit are filing amicus briefs that are due by Feb. 14.

New York City was one of at least four other localities to bring suits against Exxon, Chevron, BP, ConocoPhillips and others over the alleged damages wrought by man-made warming. Several California cities have seen their climate lawsuit hit rough patches as well.

Manufacturing groups are fighting the lawsuits tooth and nail. The National Association of Manufacturers (NAM), for instance, believes that New York City’s lawsuit is designed to up Democratic Mayor Bill de Blasio’s credibility among the Democratic Party’s environmentalist wing.

“City officials, including Mayor de Blasio, have made clear that the true purpose of the lawsuit is to attack manufacturers and manufacturing workers,” NAM Senior Vice President Linda Kelly said in a statement Wednesday addressing the anniversary.

Her group is one of the chief opponents of the climate crusades. (RELATED: Exclusive: Docs Suggest A Personal Vendetta Between Two Lawyers Might Be Fueling Climate Crusade)

She added: “The issue of climate change is a global public policy issue that has no place in the courts, a point that judges across the legal spectrum have noted in dismissing these frivolous cases, including New York City’s, and we expect the same outcome for the City’s appeal.” 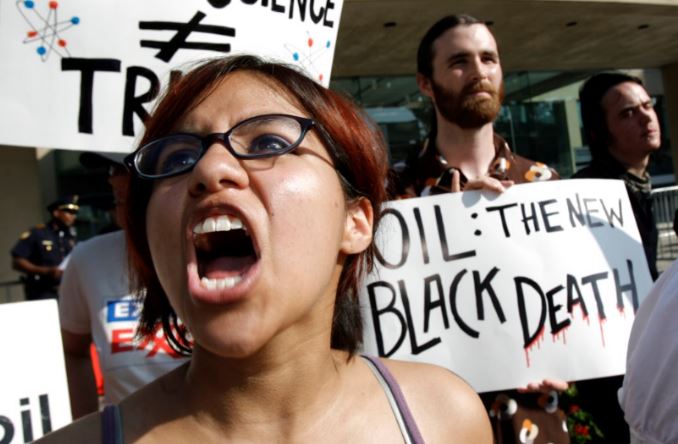 Two of the attorneys representing the cities have a history of suing and counter-suing each other over personal squabbles. Attorneys Vic Sher and Matt Pawa got into a multimillion dollar tiff in 2014 stemming from a lawsuit they both worked on against Exxon. Sher, who was with Sher Leff at the time, alleged Pawa’s group, Pawa Law Group, failed to distribute money from a settlement in the case.

Hagens Berman, where Pawa currently works, is handling King County’s lawsuit, along with the one in New York City. The firm stood to earn possibly billions of dollars in contingency fees depending on the total winnings, had San Francisco, Oakland or New York City won their global warming suits.

The lawsuit comes after three years of investigation first orchestrated by former New York Attorney General Eric Schneiderman, who resigned in April 2018 over abuse allegations from former romantic partners. The probe took many twists and turns and seemed to come to a halt shortly after his resignation.

Things have changed. Schneiderman’s replacement, Barbara Underwood, announced a lawsuit against the Texas-based oil producer in October 2018. Exxon engaged in a “longstanding fraudulent scheme” to deceive investors, analysts and underwriters “concerning the company’s management of the risks posed to its business by climate change regulation,” the lawsuit notes.

The Democrat brought the lawsuit under the Martin Act, a state law that gives her broad authority to prosecute securities fraud. The suit demands Exxon turn over any profits the company made through the alleged fraud. Exxon could be made to pay out hundreds of millions of dollars if the suit is successful.

Exxon has not yet responded to The Daily Caller News Foundation’s request for comment about where the suits stand.