Polish authorities arrested and charged a Huawei executive and a former Polish government official with espionage, The Wall Street Journal reported Friday. The arrest deals a brutal blow to the Chinese company.

News of the executive’s arrest comes amid speculation that Beijing is using Huawei to spy on U.S. companies as they build out the world’s next generation of mobile-telecom networks. The executive, whose name is blocked from public, pleaded not guilty to a crime that carries up to a decade in prison.

This is the second time in two months that Huawei has dealt with executives being charged with crimes in foreign nations. Canada detained the company’s chief financial officer in early December on charges related to Iranian sanctions.

“Huawei is aware of the situation, and we are looking into it,” a spokesman for the company told reporters. Huawei has repeatedly dismissed claims that it is a Beijing tool, with company officials noting that it is an independent entity and has never been implicated in any spy rings – until now. 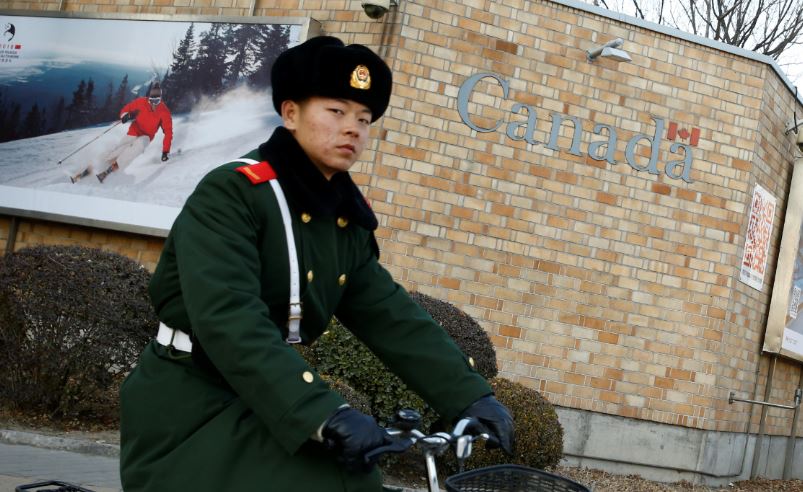 A paramilitary police officer cycles past the embassy of Canada in Beijing, China, Dec. 12, 2018. REUTERS/Thomas Peter

Poland’s counterintelligence agency searched the local Huawei office and the home of the Chinese national, Poland’s state-owned broadcaster reported Friday. The executive was identified as a graduate of one of China’s top intelligence schools, WSJ noted.

The arrest is bound to increase speculation that the mysterious company is acting on behalf of China. Canadian authorities, at the behest of U.S. officials, arrested Huawei CFO Meng Wanzhou on charges she lied to banks about Huawei’s business in Iran. She denies charges of violating U.S. sanctions. Meanwhile, tensions are at an all-time high between the U.S. and China. (RELATED: Trump Celebrates As Trade Tensions Appear To Pause With China)

This report came a month after U.S. President Donald Trump tweeted about the Chinese tariff dispute in an attempt to calm volatility in U.S. markets.