Rep. Alexandria Ocasio-Cortez picked the wrong guy to get in a fight with Thursday night. Sure, journalists have a wretched rap right now. But a congresswoman calling out a Washington Post fact checker — and not getting her facts right — is a brutally bad look.

Let’s put this all in some context: The splashy, new, dancing New York House Democrat, who once claimed there the three branches of government are the House, Senate and the presidency, is scheduled to head off to Utah’s famed Sundance Film Festival Friday for a three-day jaunt. Because where else would an edgy, social media-savvy member of Congress go during a government shutdown?

In the marble halls of Congress, she is dangled as an expert for her crustier colleagues because she has amassed 2.64 million followers.

Lights. Cameras. Attention. AOC is into all of it. No matter how scared she claims she is by the spotlight.

On Thursday, WaPo‘s supreme Fact-Checker Glenn Kessler fired off a fack-check on Ocasio-Cortez in which he awarded her three Pinocchios.  The headline: “Ocasio-Cortez misfired facts on living wage and minimum wage.” In the story, Kessler wrote that she “is sometimes fast and loose with her facts.” Kessler explained in his piece that even before his story ran, he had a “tense” conversation with her spokesman.

The subject matter here is pretty Washington wonky. Meaning, you won’t see Kim Kardashian weighing in on any of this. But the gist is this:

On Thursday night at 11:47 p.m., Kessler and the congresswoman were still battling after he linked to a paper by Jason Furman, a pro-Walmart former President Obama aide, in the piece. The congresswoman accused Kessler of not being objective. Ocasio-Cortez has a prickly relationship with the press. Perhaps that is because she doesn’t appear to read stories too carefully before she goes on a rampage. (RELATED: Ocasio-Cortez Receives High Praise From Weiner’s Ex)

Since @AOC accused The Fact Checker of relying on a Walmart-funded think tank paper when we fact-checked her, we need to set the record straight. She’s wrong. Don’t always believe what you see on Twitter. The article has been updated with a note explaining the provenance. pic.twitter.com/9vVZNMuEPh 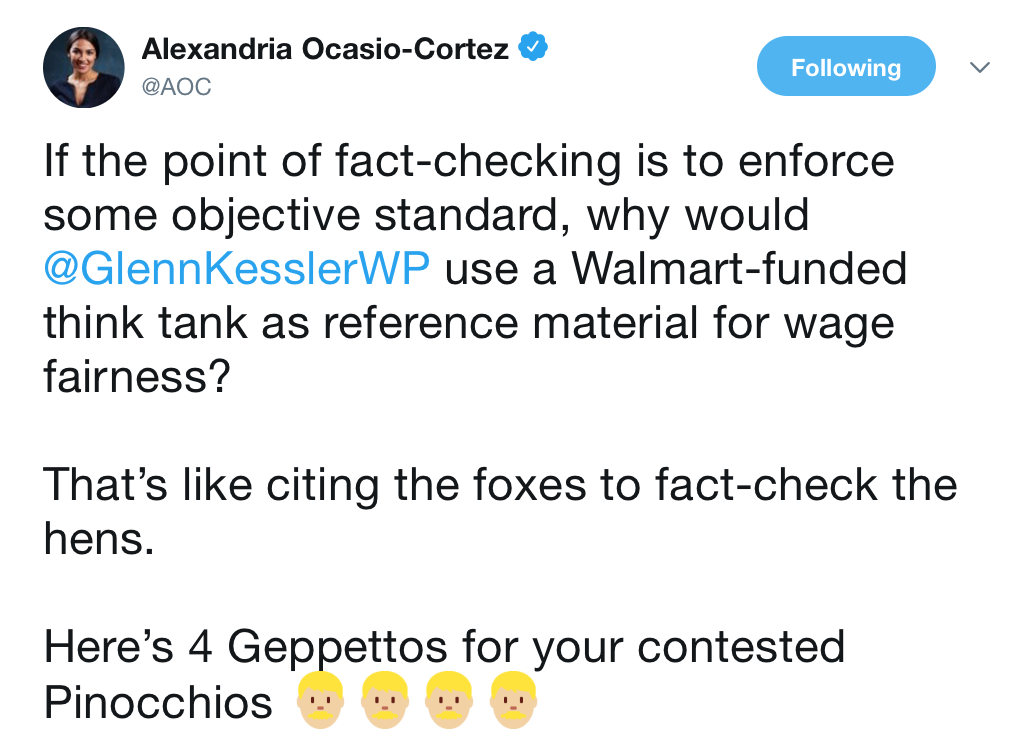 Barro replied, “There has been some confusion. The paper in question here is by Obama/Clinton alum Jason Furman. Kessler links a copy of it posted by Mackinac Center, a conservative think tank. But Furman didn’t write it for Mackinac. He wrote it for a Center for American Progress panel.”

KESSLER: “Check the name of the author: Jason Furman, chairman of Council of Economic Advisers under Obama. He’s someone I have known for 20+ years and he is simply citing some basic economics. I included the link only because his discussion of the economics was detailed and thorough.”

Shorter Kessler: Do your homework. You are dumb. I am smart.

OCASIO-CORTEZ: “Revolving-door politics doesn’t care what admin a person worked for. The truth is, many folks come to govmnt to collect a title, & leave to collect a lobbyist check. WaPo itself touched on this by covering the Harvard Orientation. You’re legitimizing that by citing this study.”

Shorter Ocasio-Cortez: I know how to use social media.

KESSLER: “He also included some caveats which were too complex to include in that section of the fact check. So I included the link so readers could learn more. But focus on the author — who in his time in govt spent a lot of time on addressing income inequality.”

Shorter Kessler: This is too complex for your brain.

Liberal reporter Ryan Grim of The Intercept and previously Huffpost, rode in on a white horse Friday morning to side with Ocasio-Cortez. But it was a little late — she had already sort of apologized.

“Objectively, this @GlennKesslerWP fact check from yesterday should simply be retracted,” Grim tweeted. “It’s just flat out wrong, even before you get to the question of the paper he cited titled ‘Walmart: A Progressive Success Story.'”

He continued, “Furman has a particular view, that Walmart is actually good. Kessler says he’s known Furman ‘for 20 years.’ That’s fine, and Furman is totally free to believe that Walmart is progressive and good. But Kessler has no right to treat Furman’s opinion as an objective fact.”

And this: “When Obama brought Furman into his administration, the left objected — specifically because of Furman’s belief that Walmart is good, among other things,” he wrote. “To simply treat Furman’s opinion as the only accurate view of the world is bizarre, and not how you do fact checking.”

So something prompted AOC to offer slight remorse, however phony.

On Friday morning at 7:34 a.m., Daniel Drezner, a professor at The Fletcher School, a WaPo contributor and a non-resident senior fellow at the liberal-leaning, centrist Brookings Institution, tweeted this:

“You might want to do a little research on Jason Furman and then apologize for the implications in this tweet,” he wrote.

At 8:30 a.m. Friday, AOC offered a lukewarm apology on Twitter.

“I am criticizing the rationale of saying we should trust a questioned source paper because of a standing friendship and X admin, bc neither preclude the possibility of revolving door politics – if the tweet read as though I was going after @JasonFurmon [sic] specifically, I apologize,” she wrote.

“If the tweet read…” and “I apologize” are not words that are used in a sincere apology. She detaches herself from her thought.

All in all, the congresswoman’s apology is half-assed.