Democratic New York Rep. Alexandria Ocasio-Cortez and left-wing group Media Matters teamed up to push a viral but inaccurate claim from one of her policy advisers about the contents of documents relating to her Green New Deal proposal.

Robert Hockett, a Cornell law professor who is advising Ocasio-Cortez on her Green New Deal, claimed on Fox News’ “Tucker Carlson Tonight” that her proposal did not include economic protections for those “unwilling to work” and claimed that the phrase came from a “doctored document.”

“Why would we ever pay people who are quote, ‘unwilling to work?'” asked Carlson, a co-founder of The Daily Caller News Foundation.

“I, we, we never would, right? And AOC has never said anything like that, right? I think you’re referring to some sort of document that some, I think some doctored document that somebody other than us has been circulating,” Hockett answered, inaccurately.

“Oh, I thought that came right from her, that was in the backgrounder from her office, is my understanding,” Carlson replied.

“No, no. She’s actually tweeted it out to laugh at it. If you look at her latest tweets, it seems that apparently, some Republicans have put it out there,” Hockett insisted.

Ocasio-Cortez’s office did, however, publish a “Green New Deal FAQ” that said it guarantees “economic security to all who are unable or unwilling to work,” contrary to Hockett’s claims. Her office later deleted the FAQ.

Screenshot from Green New Deal FAQ on Rep. Alexandria Ocasio-Cortez’s website. It has since been deleted.

Saikat Chakrabarti, Ocasio-Cortez’s chief of staff, said in a series of tweets Saturday that the FAQ was published by mistake. It did not match the Green New Deal’s legislative text on aspects like welfare and nuclear power.

Mistakes happen when doing time launches like this coordinating multiple groups and collaborators. It’s hard to have both a transparent and open process with many stakeholders while keeping all info locked down. But what’s in the resolution is the GND.

“An early draft of a FAQ that was clearly unfinished and that doesn’t represent the GND resolution got published to the website by mistake,” Chakrabarti tweeted. “But what’s in the resolution is the GND.”

Hockett appeared to refer to an Ocasio-Cortez tweet that debunked a fake screenshot of the Green New Deal proposal that said it required men to urinate into to milk jugs. The hoax image did not include language about those who are “unwilling to work.”

When your #GreenNewDeal legislation is so strong that the GOP has to resort to circulating false versions, but the real one nets 70 House cosponsors on Day 1 and all Dem presidential candidates sign on anyway https://t.co/BbHIn8cu0f 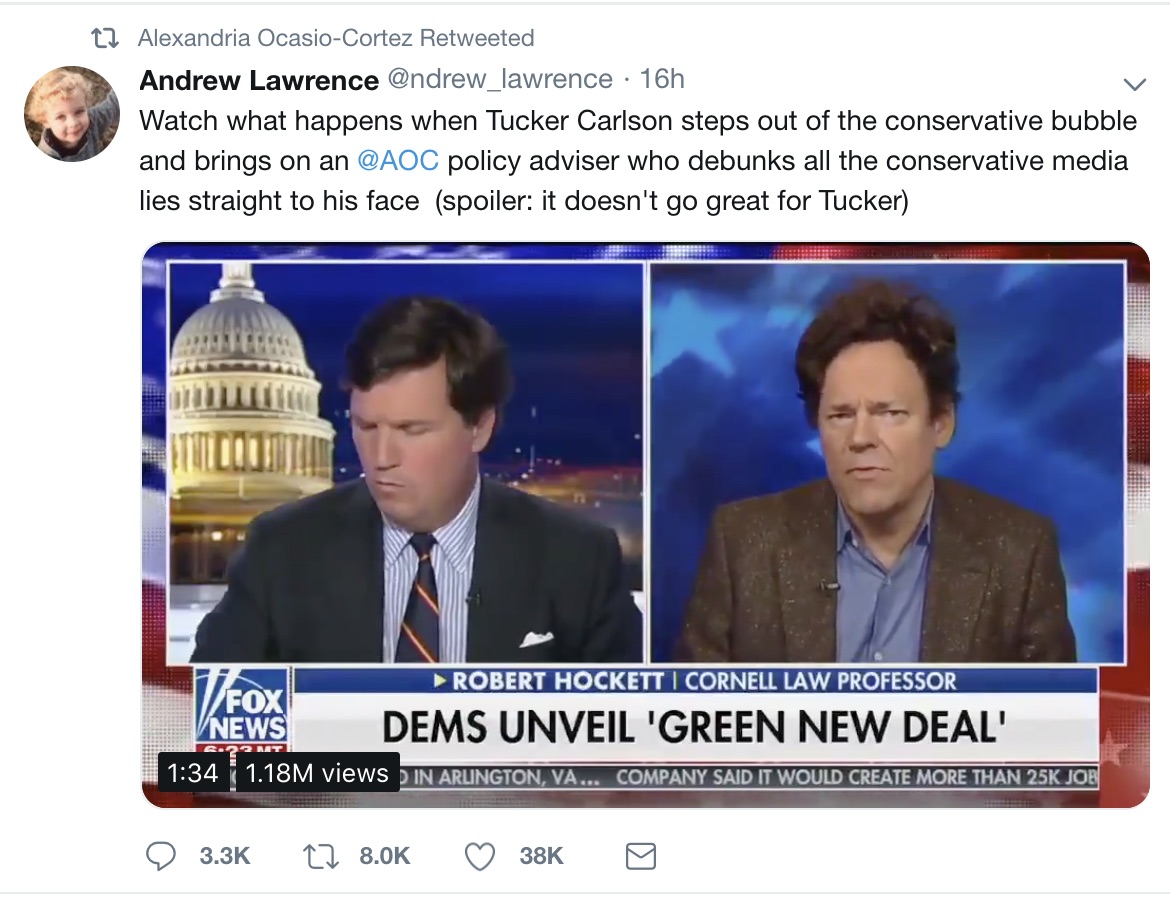 Hockett conceded that he was in the wrong in an email to The Daily Caller News Foundation on Saturday.

“It appears there was more than one document being discussed yesterday, only one of which I had heard about with any definiteness by last evening after a long day of media appearances – namely, the one referred to by the Congresswoman in her tweet,” he wrote. “I regret that we seem unknowingly to have ended up speaking about different documents for a minute during our longer and otherwise ‘on-the-same-page’ conversation last night.”

Neither Media Matters nor Ocasio-Cortez’s office returned requests for comment by press time.