Introducing himself as the “person whom Ralph Northam refused to shake” hands with, Jackson told the crowd he’s “not interested in shaking” Northam’s hand because he thinks “it’s OK to kill a baby even after it’s escaped his mother’s womb alive.”

Jackson talks about America’s founders, who despite “all the nasty things that are said about them,” “gave us a nation unlike any that’s ever existed on the face of the earth.”

“You don’t own us,” Jackson said later. “We are our own people.”

“For those who want to turn us into a socialist country, not on our watch. America will remain the land of the free because we are the home of the brave,” he said to chants of “USA! USA!”

“I don’t care what they call me, I’m gonna stand up for America until I breathe my final breath,” he said.

Watch the entire speech along with crowd reactions below:

“BLEXIT is a frequency for those who have released themselves from the political orthodoxy,” reads the movement’s website. “It is a rebellion led by Americans wishing to disrupt the simulation of fear.” (RELATED: ‘BLEXIT’: This First-Time Voter Knows Exactly Why He’s Voting Republican) 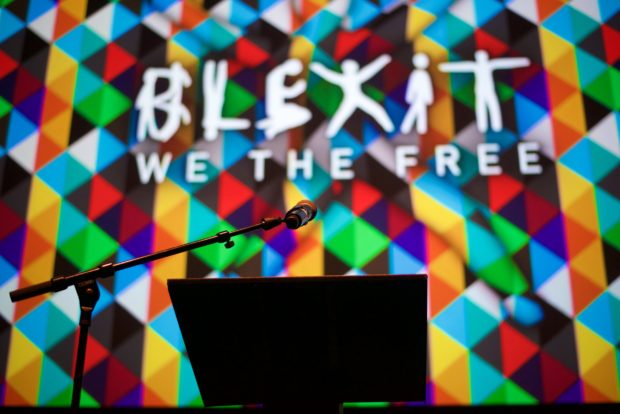 “Blexit is the Black and Latino exit from the lies of the left,” Owens told The Daily Caller earlier this year. “For too long we’ve been taken advantage of — it’s time for us to take authority over our lives. We’re Americans first.”

Grae Stafford contributed video and photographs to this report.