“Omg please do NOT clip your fingernails on the Metro, people.”

“My next door neighbor and his gf are having a fight in a different language. Lots of stomping, yelling, a door just shut. my ears are pressed to the wall like a creeper. I’m dying to know what they’re sayin.” — Pardes Seleh, Mediaite.

“Having just survived a stroke that should have killed me, my heart is broken for #LukePerry’s family. He was a kind, gentle soul who probably, not unlike me, never thought he was at risk. PLEASE, get your blood pressure checked and get a check up every year!!!” — MW.

“So glad to be going home. I hate D.C.” — Michelle Malkin, conservative commentator.

Janice Dean is nervous about her ‘deeply personal’ book 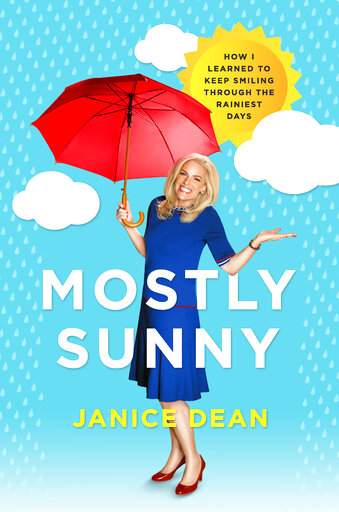 “I have to be honest. My book #mostlysunny comes out this Tuesday and I’ve never been more nervous in my life. It’s deeply personal and reveals more than I’ve shared with my family and closest friends. I could use some prayers to help me get through the anxiety.” — Janice Dean, meteorologist, co-host, FNC’s Fox & Friends. “I’ve taken a lot of chances in my life, but this feels like nothing I’ve ever experienced. I’m scared to death.”

Dean’s new book is called: “Mostly Sunny: How I Learned To Keep Smiling Through The Rainiest Days.” A few of the more personal details revealed in her book is her struggle with MS, instances involving a sexist boss like the late Roger Ailes, who she says asked her for phone sex, and a cosmetic procedure that went awry.

Sen. Brown has an unusual link to Luke Perry

“Very saddened by this loss. Luke Perry was not only a talented actor—but a warm, kind person who made his home state proud. My thoughts are with his friends, family, and loved ones.” — Sen. Sherrod Brown (D-Ohio). (RELATED: Sen. Sherrod Brown’s Dad Delivered Baby Luke Perry)

This is what happens to Piers Morgan when he’s jetlagged…

Confessional: Reporter met his wife on the job

“On Nov. 11, 2017, after a very long day shadowing a Cabinet secretary, I dropped by my local pub for a much-needed drink. And I randomly met this beautiful, wonderful, smart woman. She worked at the State Department and I joked that I needed help renewing my passport. I got her number. We’ve been inseparable ever since. Today at the Gridiron Sunday show, I proposed on stage in front of some 500 people. She said yes, and I look forward to an amazing life with Bridget. (For the record, I was in a suit for the proposal and not dressed as a border agent as pictured here).”

Ben Smith gets results when he cries over spilled milk

METRORAIL INFO: “Hey Ben, can you recall the four digit railcar number so we can have this cleaned up? -KP”

The Observer: Things are ‘dumb’ and ‘gross’

“Today was dumb and gross and hopefully we haven’t forgotten it by tomorrow.” — Nathaniel Friedman, GQ.

“Every elected official who was consumed by scandal in Virginia is still in office. A campaign worker accused the president of sexually harassing her less than two weeks ago and barely anyone cares. We just keep moving on, crazy news cycle to crazy news cycle.” — Sam Stein, The Daily Beast.

“Hey, Rand Paul. You have a Napoleon Complex and your hipster act is tired. Support the President and I’ll go back to harmlessly not noticing you.” — Patrick Howley, EIC, Big League Politics. (RELATED: CNN Refuses To Let Patrick Howley Go Live)

Writer Moe Tkacik weighs in on female journos and weight 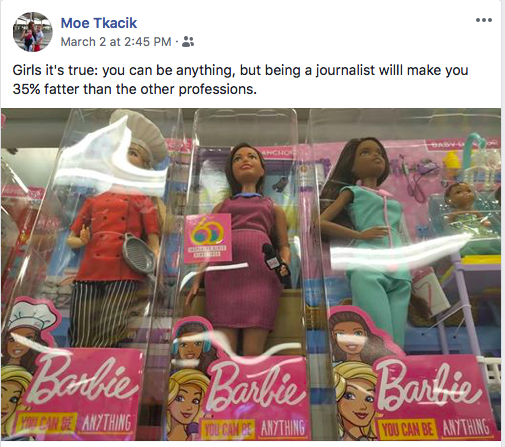 People are obviously saddened by the sudden loss of actor Luke Perry, who died this week just days after having a stroke at the age of 52. But…his pal and Beverly Hills, 90210 co-star Shannen Doherty‘s special memory about Perry bringing his dog to a dog friendly café seems pretty weak. Lots of people bring their pooches to cafés. Here. Former ABC “The View” co-host Jedidiah Bila tweets, “’A couple of weeks ago in February, Luke and I met up for lunch. He chose the restaurant based on who would allow his dog.’ “A very special soul right till the end. Thank you for this, @DohertyShannen. So deeply sorry for your loss.”

“I have to practically beg my dog to cuddle.” — David Larter, naval warfare reporter, Defense News.

EDDIE SCARRY: “Eugene Robinson, without a flicker of irony, said on MSNBC just now that Trump’s CPAC speech was “rambling.” Maybe, but it was only 2hrs. ‘Morning Joe’ is 3hrs but instead of rambling they just repeat the same thing: ‘Trump outrageous. Trump outrageous.'”

MONTEL WILLIAMS: “Eh I’m so so on this tweet – feels forced… No pizzaz…”

“It’s not normal for a grown man to sleep night after night, year after year, with young boys in their bed. Don’t @ me. Goodnight.” — Andy Lassner, executive producer, Ellen Show.

‘Your boy was a pedophile’

“Michael Jackson [fans] please get a life. You are DMing and emailing a homosexual Iranian reporter who tweets about towels, elephants, and ADHD. You are not going to change my mind…your boy was a pedophile. Don’t even waste your time replying to tweets!” — Yashar Ali, HuffPost, New York Mag.