Democratic Minnesota Rep. Ilhan Omar seemingly escaped the anti-hate resolution news cycle without apologizing for the comments that many believe inspired the resolution in the first place.

During a town hall last week, Omar sparked outrage when she implied that she was expected to maintain allegiance to Israel, saying, “So for me, I want to talk about the political influence in this country that says it is okay to push for allegiance to a foreign country.”

Then, over the weekend, Democratic New York Rep. Nita Lowey criticized the Minnesota congresswoman on Twitter, saying, “Lawmakers must be able to debate [without] prejudice or bigotry. I am saddened that Rep. Omar continues to mischaracterize support for Israel. I urge her to retract this statement and engage in further dialogue with the Jewish community on why these comments are so hurtful.”

Omar responded, saying in part, “I should not be expected to have allegiance/pledge support to a foreign country in order to serve my country in Congress or serve on committee.”

“No member of Congress is asked to swear allegiance to another country. Throughout history, Jews have been accused of dual loyalty, leading to discrimination and violence, which is why these accusations are so hurtful,” Lowey replied last Sunday.

Many criticized Omar’s response for pushing an anti-Semitic trope.

Jonathan Greenblatt, the CEO Anti-Defamation League, an organization dedicated to “stop the defamation of the Jewish people, and to secure justice and fair treatment to all,” sent a letter to Speaker Pelosi about Omar’s comments. He asked for Pelosi to bring a resolution to the floor condemning anti-Semitism.

It also addressed the “dual loyalty” accusation, stating in part:

Accusing Jews of having allegiance to a foreign government has long been a vile anti-Semitic slur that has been used to harass, marginalize and persecute the Jewish people for centuries. Sometimes referred to as the “dual loyalty” charge, it alleges that Jews should be suspected of being disloyal neighbors or citizens because their true allegiance is to their co-religionists around the world or to a secret and immoral Jewish agenda.

Later that day, the text of the resolution was released and it did not mention the Minnesota congresswoman by name. The vote was scheduled for Wednesday.

A multitude of congresspeople from both sides of the aisle condemned Omar’s statements. Republicans, such as Reps. Lee Zeldin of New York, Liz Cheney of Wyoming, Steve Scalice of Louisiana and Guy Reschenthaler of Pennsylvania, all called for her to be stripped of her seat on the House Foreign Affairs Committee.

Despite their calls, Foreign Affairs Committee Chairman Eliot Engel, who is Jewish, said he was against her removal during an interview with CNN’s Erin Burnett on Tuesday. In a statement issued last Friday, calling her comment a “vile anti-Semitic slur” and “deeply offensive.”

When Wednesday came around, the vote did not occur like it was scheduled. The vote was pushed back a day, and delayed once again, but Democratic leadership decided it would be best to condemn all hate and not just anti-Semitism.

In a press conference prior to the vote, House Speaker Nancy Pelosi was asked if Omar owed people an apology. She answered by saying Omar “may need to explain.” 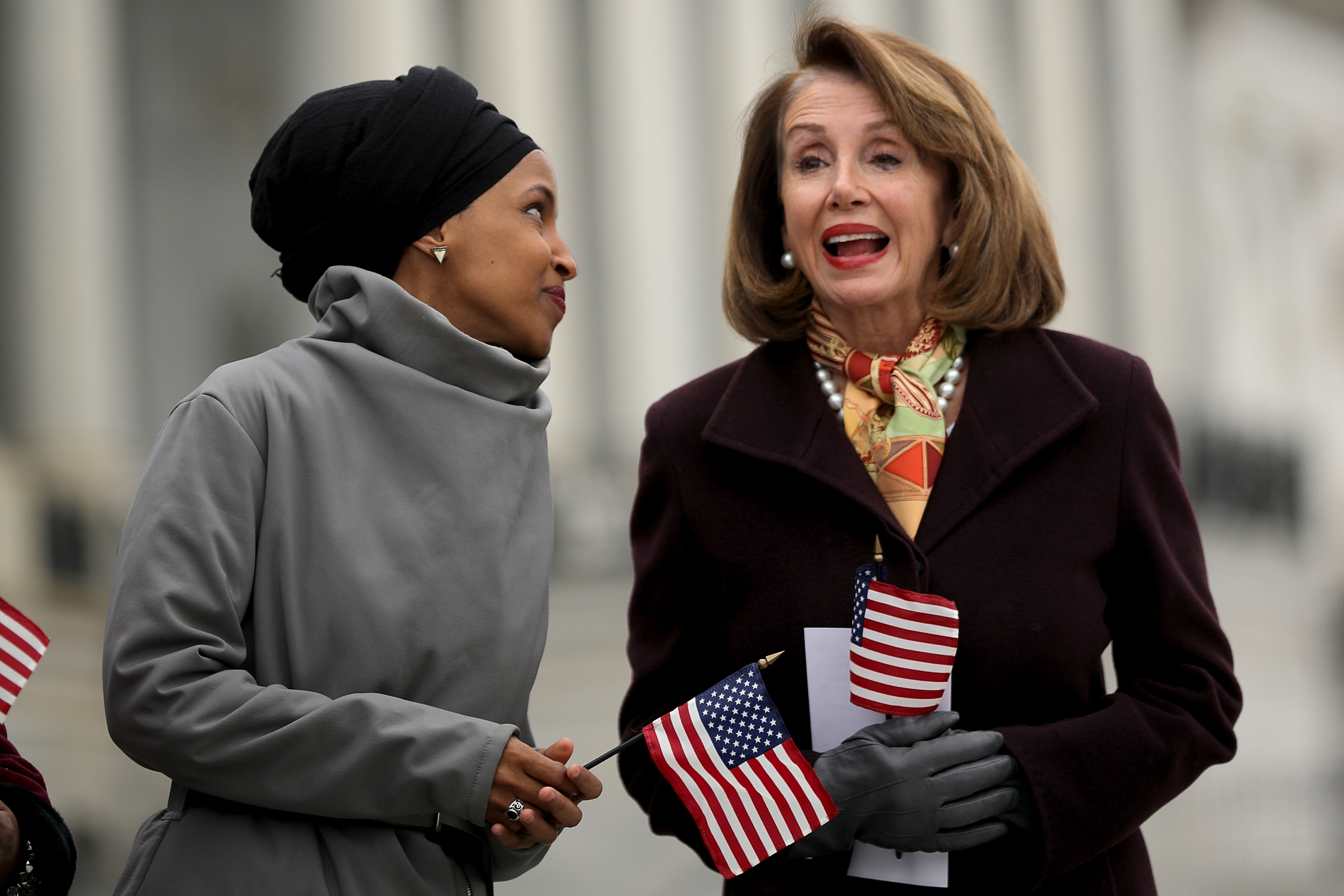 WASHINGTON, DC – MARCH 08: Rep. Ilhan Omar (D-MN) (L) talks with Speaker of the House Nancy Pelosi (D-CA) during a rally with fellow Democrats before voting on H.R. 1, or the People Act, on the East Steps of the U.S. Capitol March 08, 2019 in Washington, DC. (Chip Somodevilla/Getty Images)

The resolution ended up condemning the following: “African Americans, Latinos, Native Americans, Asian Americans and Pacific Islanders and other people of color, Jews, Muslims, Hindus, Sikhs, the LGBTQ community, immigrants, and others” — but it still did not name Ilhan Omar.

It passed through the House on Thursday with a vote of 407-23, with all 23 “Nays” coming from Republicans. Many of them cited their beliefs that the final draft of the resolution no longer accomplished the goal they set out to reach – a condemnation of Omar’s comments and of anti-Semitism in general.

Every Democrat, including Omar, voted in favor of the legislation.

Later on Thursday, Omar released a joint statement on the vote with Democratic Reps. Andre Carson and Rashida Tlaib.

“Today is historic on many fronts. It’s the first time we have voted on a resolution condemning Anti-Muslim bigotry in our nation’s history. Anti-Muslim crimes have increased 99% from 2014-2016 and are still on the rise,” the statement began.

“We are tremendously proud to be a part of a body that has put forth a condemnation of all forms of bigotry including anti-Semitism, racism, and white supremacy,” it continued. “At a time when extremism is on the rise, we must explicitly denounce religious intolerance of all kinds and acknowledge the pain felt by all communities. Our nation is having a difficult conversation and we believe this is great process.”

Their statement condemns “religious intolerance of all kinds,” yet it did not include an apology.

The Daily Caller asked Omar if she felt the need to apologize more specifically, but her office did not respond.