Beto O’Rourke’s recently unearthed membership in the hacking group “Cult of the Dead Cow” may not have included the “edgiest sorts of hacking activity,” but it did, apparently, include writing murder fantasies and exceptionally bad poetry.

Writing under the now-exposed pseudonym “Psychedelic Warlord,” a teen-aged O’Rourke appears to be the author of a poem titled “The Song of the Cow,” published in 1988 by “cDc (Cult of the Dead Cow) communications.”

“I need a butt-shine,” the poem begins … and it really all just goes downhill from there:

I need a butt-shine,
Right now
You are holy,
Oh, sacred Cow
I thirst for you,
Provide Milk.

Buff my balls,
Love the Cow,
Good fortune for those that do.
Love me, breathe my feet,
The Cow has risen.

Wax my ass,
Scrub my balls.
The Cow has risen,
Provide Milk.

The poem, for better or for worse, has been preserved forever by the Google Wayback Machine as a part of the group’s former website, cultdeadcow.com. Here’s a screengrab of the entire poem: 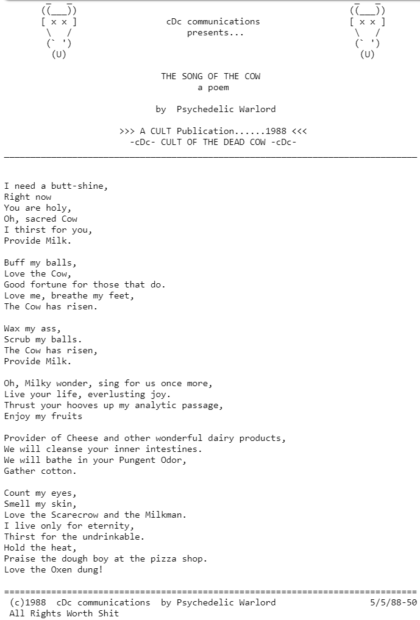 The Song of the Cow (screengrab)

O’Rourke, who launched his 2020 presidential campaign Thursday, also reportedly wrote several disturbing pieces under the “Psychedelic Warlord” pseudo, including one in which the narrator fantasized about using his vehicle to run over children. (RELATED: Texas Democratic Party Chairman Unable To Name One Beto Accomplishment)

The Daily Caller has reached out to O’Rourke for comment and will update this story if a response is provided.