Fox News’ Neil Cavuto hung up on Catholic League president Bill Donohue on Monday when he refused to stop speculating that the catastrophic Notre Dame fire could be related to other recent attacks on Catholic churches in Paris.

“Well, Neil, if it is an accident, it’s a monumental tragedy. But forgive me for being suspicious. Just last month, a 17th-century church was set on fire in Paris. We’ve seen tabernacles knocked down, crosses have been torn down, statues, —” Donohue stated.

As Donohue mentioned, a number of churches in France have been vandalized during the early part of 2019. Vandals have smashed statues, knocked down tabernacles, burned an altar cloth, destroyed the Eucharist and smeared a cross with excrement.

Saint Sulpice Church #Paris
The moment it caught on fire people were inside and attending. Firemen on the ground saying this was no accident- This was set.pic.twitter.com/TLOAYl61dX

“We don’t know that. So if we can avoid what your suspicions might be. I do want to look at what happened now,” Cavuto responded, cutting off his guest. “A very pricey rebuilding and renovation effort going on that involved a good deal of Catholic fundraising campaign I know in this country and abroad. This renovation was paid for up front. So, in other words, all the monies were there. Now I’m wondering how much more the Catholic Church commits to this or do you think they now first want to get to the bottom of it?”

“First, they have to get to the bottom of it and they will rebuild it. There’s no question about that. They certainly, the Catholic Church will come up for the money for it, that’s not even a question. I’m sorry. When I find out that the Eucharist is being destroyed and excrement is being smeared on crosses, —” Donohue pushed back. (RELATED: Shep Smith Shuts Down French Commentator From Speculating Terror Is Behind Notre Dame Fire) 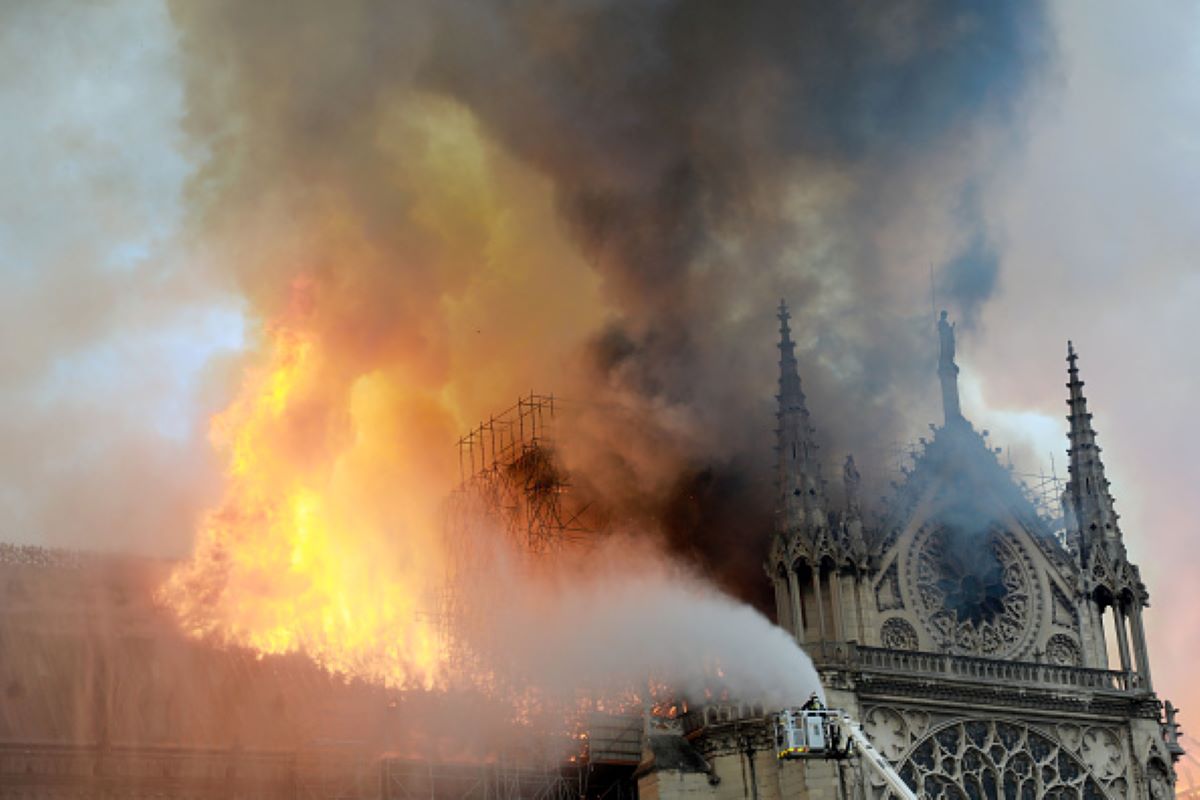 A firefighter is seen fighting the flames at Notre-Dame Cathedral April 15, 2019 in Paris, France. A fire broke out on Monday afternoon and quickly spread across the building, collapsing the spire. The cause is yet unknown but officials said it was possibly linked to ongoing renovation work. (Photo by Pierre Suu/Getty Images)

“I love you, Bill, but we cannot make conjectures about this. So, thank you. Bill, I’m sorry. Thanks very much. I do want to let people know, and again we’re not trying to be rude to our guests here. There’s so much here we don’t know about what happened here.”

Despite Donohue’s speculation that the fire was started intentionally, Reuters Paris bureau chief Luke Baker tweeted that the fire was “started by accident and is related to ongoing work, according to France 2, citing police.”

Firefighters likely struggled putting out the fire because of the Gothic engineering techniques that waterproofed the roof.