Thousands of climate change protestors took to the streets of London Monday, wielding trees, gluing themselves to street furniture and smashing glass doors in an effort to raise awareness on the climate crisis.

Part of a global campaign planned by Extinction Rebellion that spans over 80 cities across 33 cities, the demonstrators held protests and blocked traffic in five different locations around the British capital.

Waterloo Bridge, Marble Arch, Oxford Circus, Piccadilly Circus and Parliament Square were all closed due to the protests, which are expected to continue for at least a week. (RELATED: Protesters Storm BBC Headquarters, Lock It Down, Then Demand They Declare A ‘Climate And Ecological Emergency)

“We respect the right of everyone to express their point of view,” a Shell spokesman told CNN. “We ask only that they do so with their safety and the safety of others in mind.”

The protests continued at Oxford Circus, where protesters danced to a life-size model pink boat with a sound system parked in the middle of the busy crossing. The boat has the slogan “Tell the Truth” printed along its side. More protestors glued themslevs to the boat. (RELATED: 2018 Saw A Global Revolt Against Climate Change Policies)

@ExtinctionR have shut down Oxford Circus and this party look set to be a rave by this evening. Join the rebellion #climatechange #peoplesassemblies #cutcarbonemmissions #Rebellionweek #activism pic.twitter.com/YQgC16qgWK

Mark Ovland, one of the protestors glued to the boat, said that the disruption of London was to “gain attention to what is the biggest crisis facing humanity at the moment.”

“For 30 years, people have known the signs of what’s happening with the climate, with the ecological crisis. Nothing’s been done,” said Ovland to CNN. “We’ve tried writing letters, we’ve tried voting with our feet, we’ve tried campaigning in all the usual institutional ways, nothing’s worked, emissions keep going up year on year and so this is the last thing we can think of.”

“This is not a political movement, this is a movement of humanity,” said Fry. “We are all backgrounds, all ages, all races, bound together in one wish, one dream, which is that we will have a good, decent, loving future, for generations to come.” 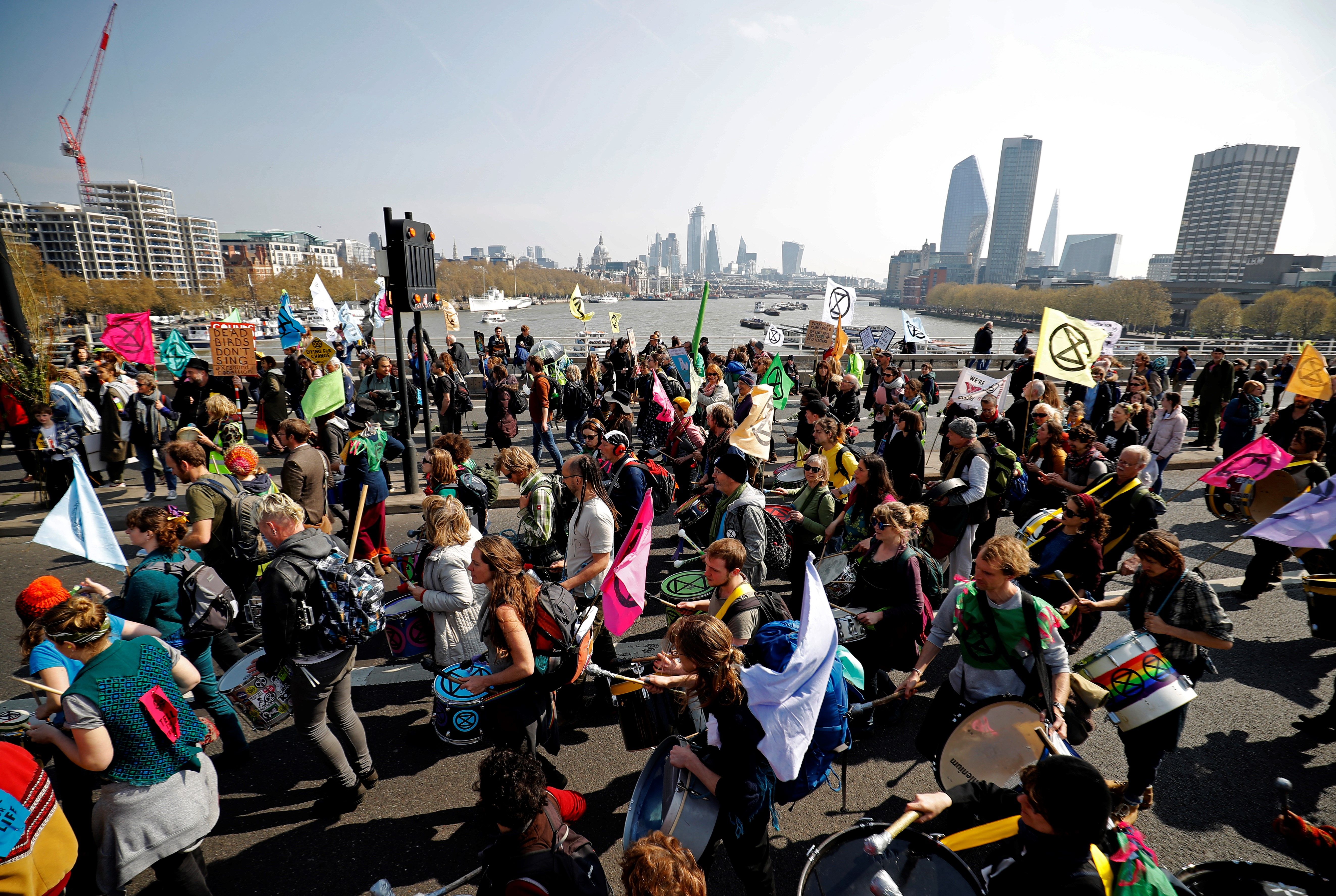 Environmental protesters from the Extinction Rebellion arrive to stage a demonstration, on Waterloo Bridge in London on April 15, 2019. (TOLGA AKMEN/AFP/Getty Images)

London’s Metropolitan Police said that plans were in place to support public order during the protests and that those traveling to London should allow for extra time. So far, three people have been arrested in the demonstrations. (RELATED: Thousands Of Students Ditch Class To Join Climate Change Protests)

Hoping that the protests elicit a response from the U.K.’s government, the Extinction Rebellion group has three demands outlined on their website.

Earlier this month, the group used a nude demonstration to disrupt a Brexit debate in Parliament saying that they “wanted to call attention to the ‘elephant in the room.'”