Only 49 percent of children were completely vaccinated in one Google day care center in Santa Clara County, California, where the vaccination rate for mumps, measles and rubella (MMR) was 95 percent. A vaccination rate of 95 percent is required to create what is called herd immunization, which makes it difficult for a disease to metastasize, the 2015 report notes.

More than 200 children were enrolled at two of Google’s child care facilities, according to data from the California Department of Public Health. At one facility, 90 percent got the MMR, a number below the herd-immunization rate. Three percent of the families at the facility claimed a personal belief exemption (PBE), an exemption California law allows. State law also allows exemptions for religious reasons.

Wired has not responded to The Daily Caller News Foundation’s request for more information regarding the data set the outlet used to make its conclusions. TheDCNF was unable to reproduce the data set. Nevertheless, Google appeared to accept the results but provided a simple explanation for the low numbers.

“In 2013-2014, these two childcare facilities had immunization rates of 98 percent and 81 percent,” a Google representative told Wired at the time. “The reported numbers for the current year are lower simply because many parents have not yet provided updated immunization records. We’ve asked them all to do this, so we can update the figures.” The representative said vaccinations are important to the Silicon Valley giant.

Wired used data from the California Department of Public Health to make its conclusions. 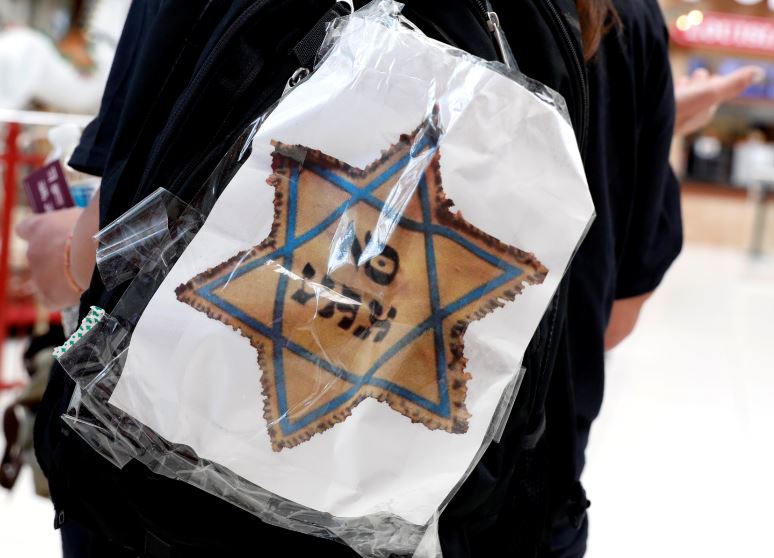 A woman opposed to childhood vaccinations wears a “No Vax” sign on her backpack U.S. March 28, 2019. REUTERS/Mike Segar

Roughly 95.4 percent of kids entering kindergarten in 2000 had received their MMR shots — the Centers for Disease Control and Prevention (CDC) claimed that year that measles was effectively eradicated. The California MMR vaccination rate was 92.6 percent in 2015. California is one of the states where measles is making a resurgence, public data show.

There have been 555 cases of measles in 2019, with 21 individual cases in California, according to the CDC. The flare-ups are emerging in areas of the country with low vaccination rates. Some worry big tech companies are actually helping to promote anti-vaccination sentiment. (RELATED: Some Of Amazon’s Top Books On Vaccinations Come From A Slew Of Noted Anti-Vaxxeres)

Dr. Peter Hotez, a pediatrician who believes Amazon’s willingness to allow vaccine skeptics top-billing is causing a serious medical crisis, is one such expert who is sounding alarm bells. “Amazon needs to step up and stop promoting the anti-vaxxer agenda,” Hotez told TheDCNF in March.

“The only way to restore this is to start dismantling this empire is to do something about Facebook and Amazon,” he said, noting that the time for balancing individual rights of publishers and public safety is over. Hotez wrote a book in 2018 titled “Vaccines Did Not Cause Rachel’s Autism,” in which he lays out the reasons why vaccinations were not the cause of his daughter’s autism.

He points to measles outbreaks in Michigan, California and elsewhere as reason enough to take what this community of activists says seriously. Numerous studies conducted over the years have shown no sign of a connection between vaccines and autism. Others are apparently starting to accept Hotez’s position.