President Donald Trump returns from his state visit to Japan Tuesday, having achieved little in terms of policy but building on his personal relationship with Prime Minister Shinzo Abe.

The Japanese rolled out the red carpet for the president, treating him to a sumo match, a state dinner, and of course, a round of golf. The festivities were matched with intense bilateral meetings about trade between the two countries and the North Korea threat.

We’ve compiled a rundown of the president’s trip.

President Donald Trump arrived in Japan Saturday and was quickly ushered to an ambassador’s meeting with Japanese business leaders.

Trump expressed optimism that the two countries would be able to work out a trade deal and said that America’s relationship with Japan has “never been stronger.”

“The relationship with Japan and the United States, I can say for a fact, has never been stronger, never been more powerful, never been closer,” the president said to kick off the trip. “This is a very exciting time for commerce between the two countries that we both love.” 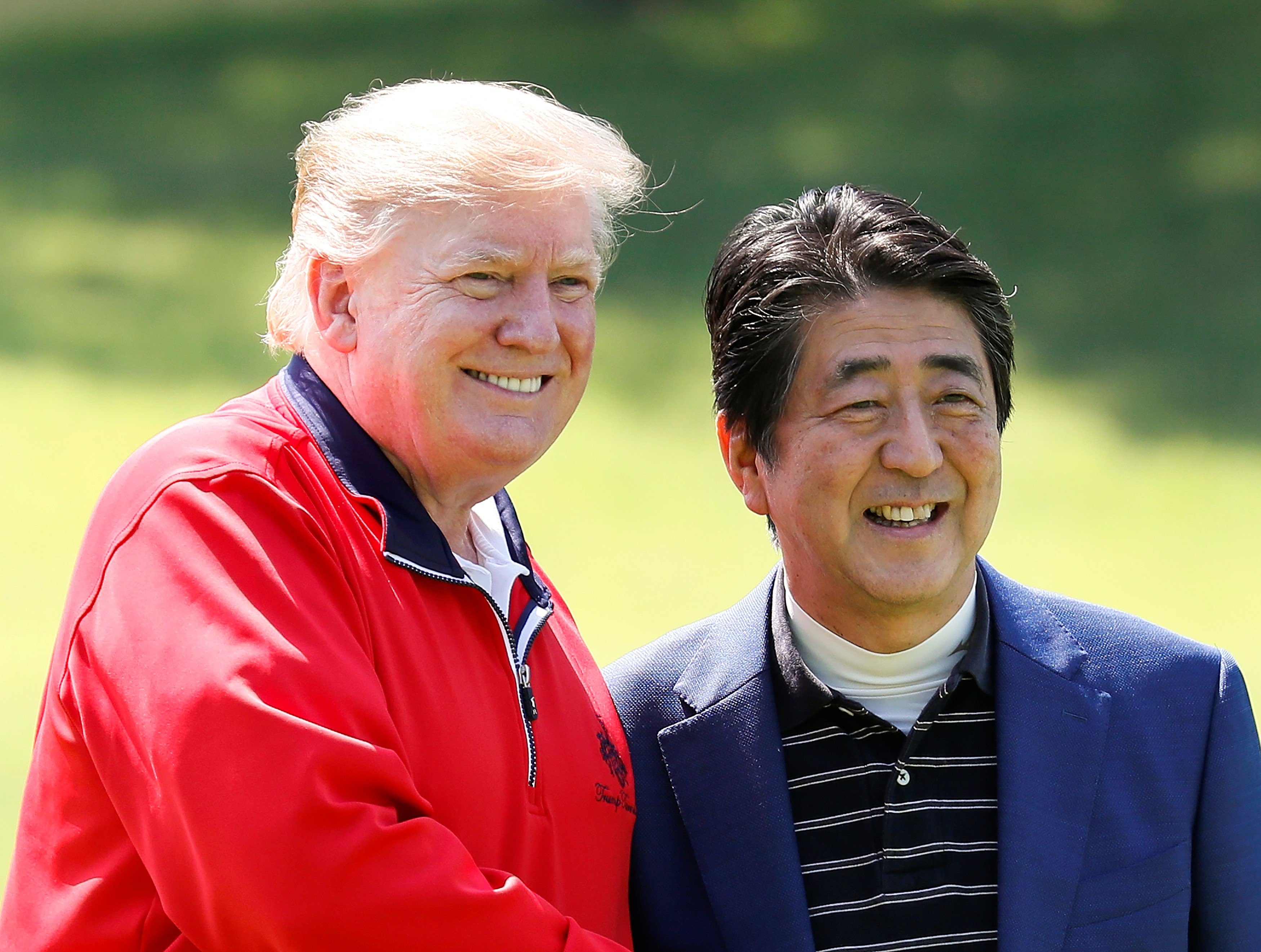 TOPSHOT – Japan’s Prime Minister Shinzo Abe (R) and US President Donald Trump smile before playing a round of golf at Mobara Country Club in Chiba on May 26, 2019. (Photo by KIMIMASA MAYAMA/AFP/Getty Images) 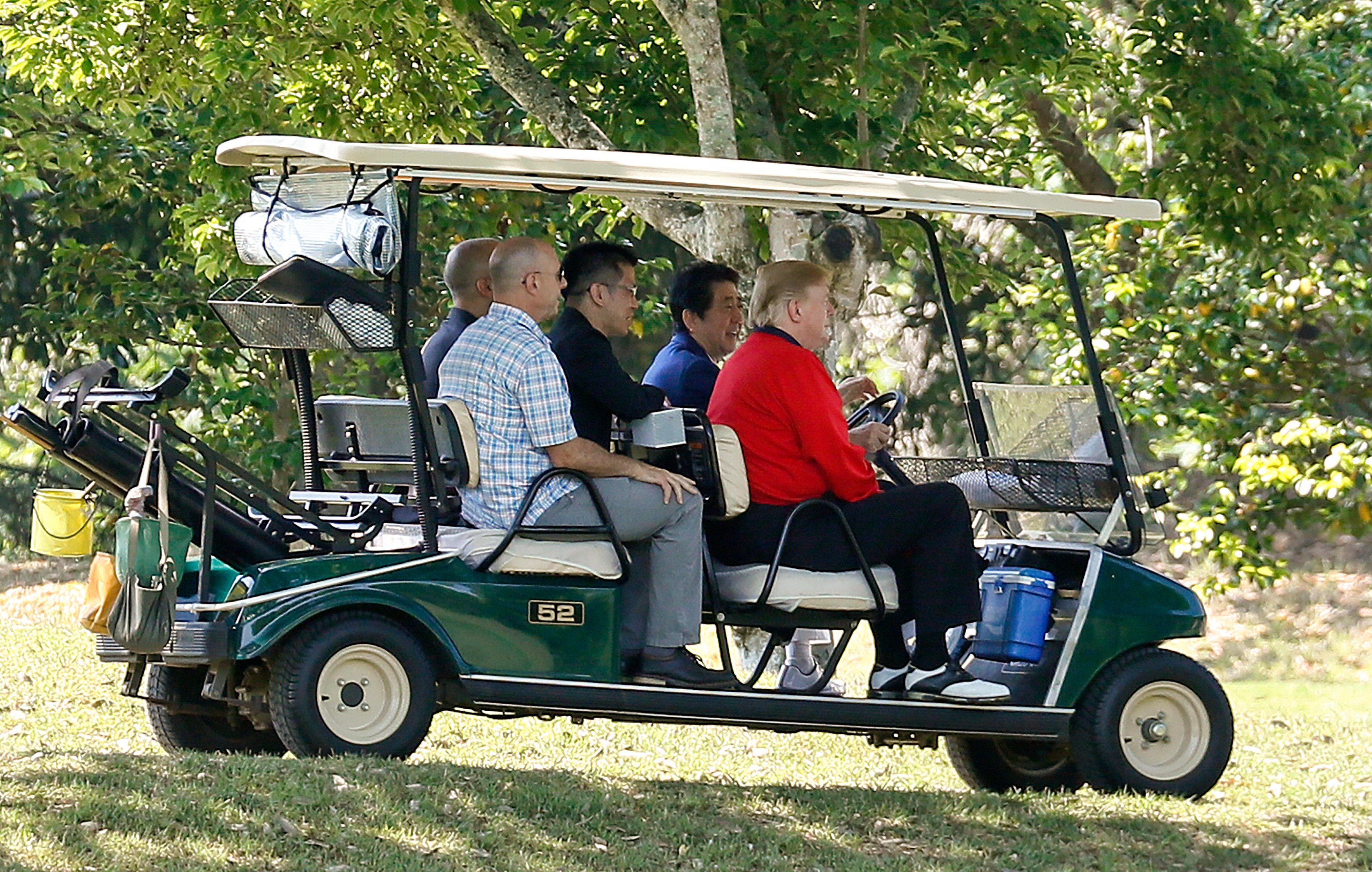 The two leaders previously golfed together during Abe’s visit to the White House in April.

While Trump golfed with Abe, First Lady Melania Trump participated in a tour of a digital art museum with Akie Abe, the prime minister’s wife. 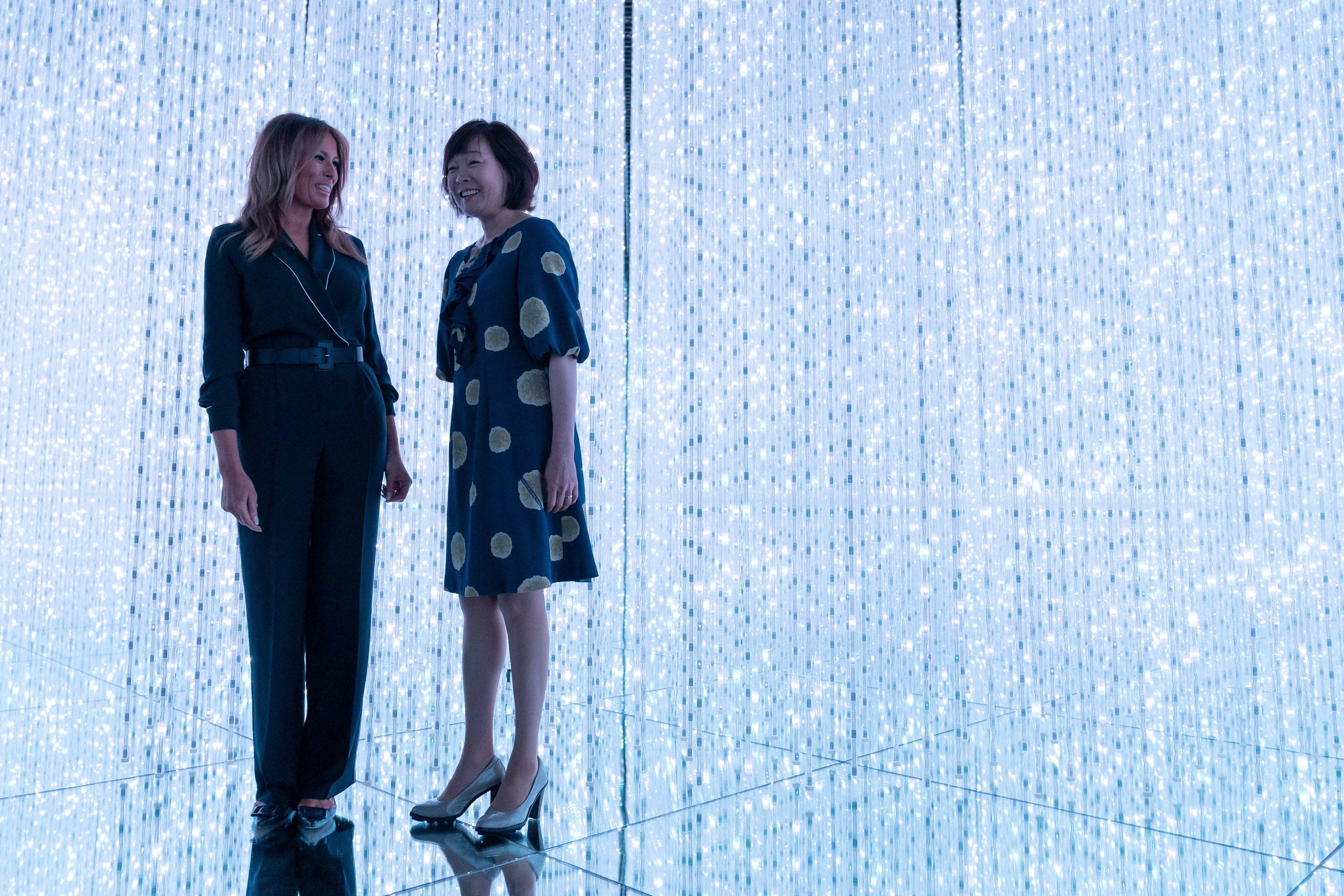 After the tour, Melania hosted a “Be Best” event for Japanese children, who waited in line to receive autographs from the first lady. The first lady gifted the children with “Be Best” drawstring bags that were filled with school supplies. 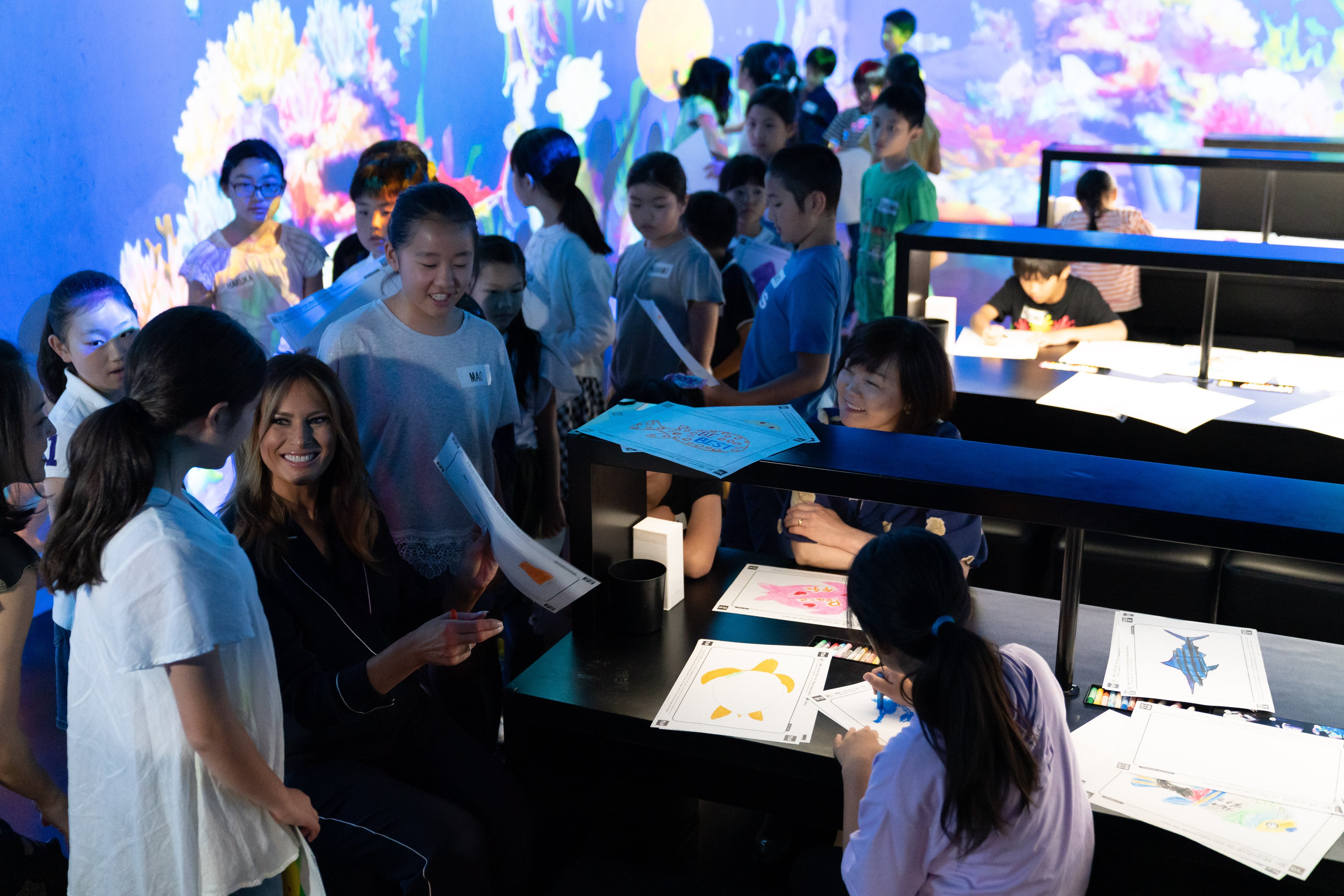 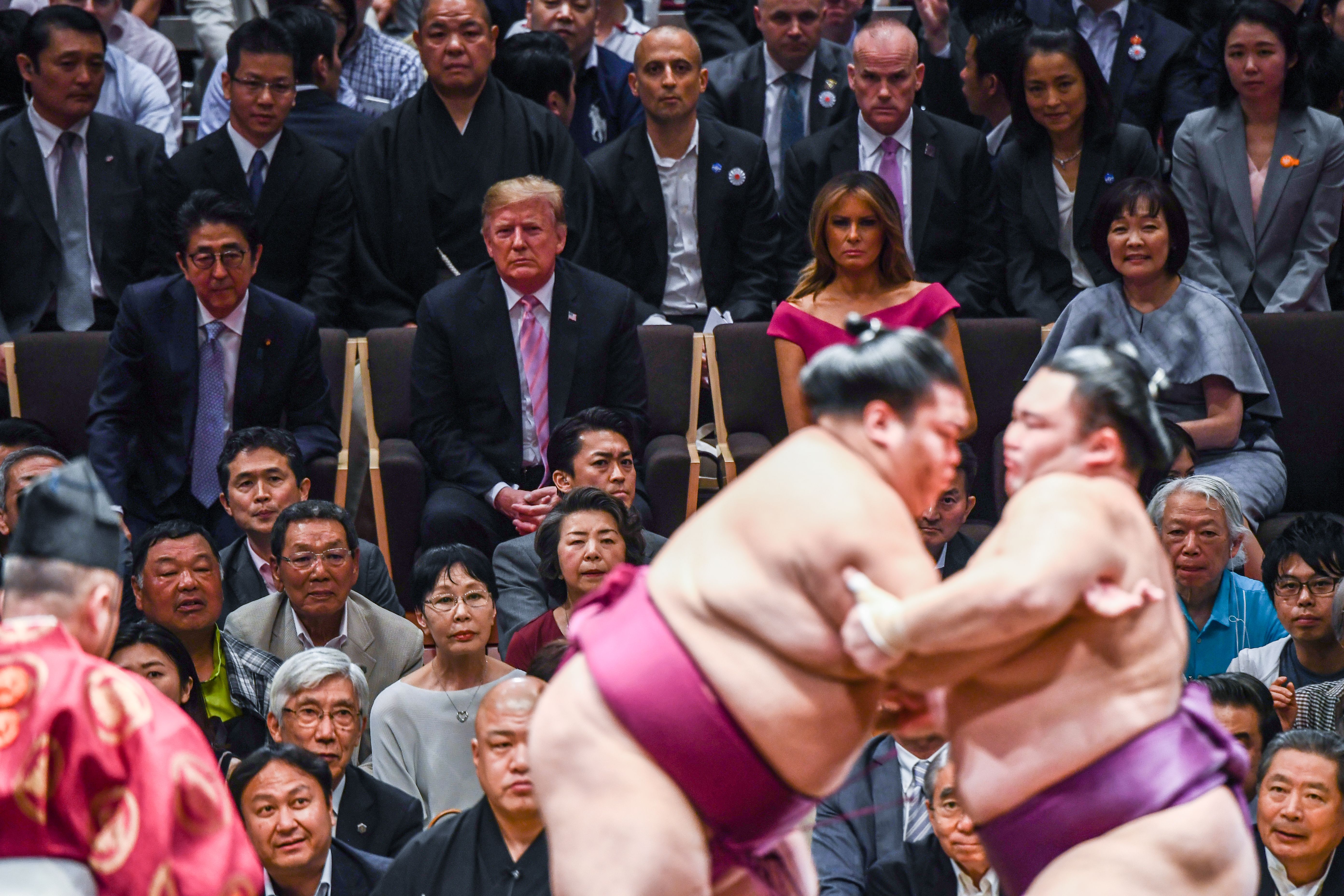 US President Donald Trump and First Lady Melania Trump are accompanied by Japan’s Prime Minister Shinzo Abe and his wife Akie Abe (centre row) as they watch a sumo battle during the Summer Grand Sumo Tournament in Tokyo on May 26, 2019. (Photo by BRENDAN SMIALOWSKI/AFP/Getty Images) 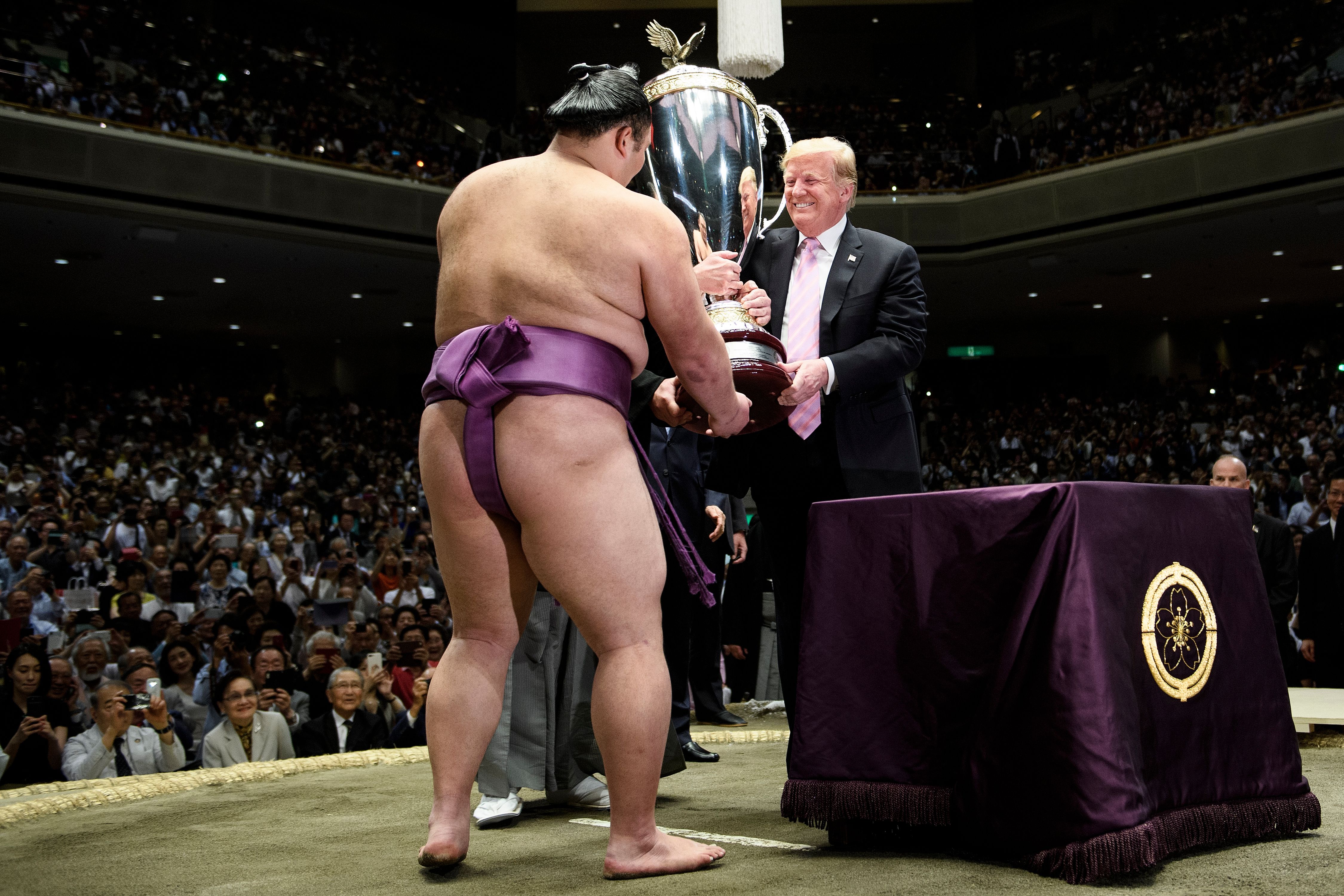 US President Donald Trump presents the President’s Cup to sumo wrestler Asanoyama during the Summer Grand Sumo Tournament at Ryogoku Kokugikan Stadium in Tokyo on May 26, 2019. (Photo by RENDAN SMIALOWSKI/AFP/Getty Images)

He is the first American president to present a customized trophy to the sumo winner. 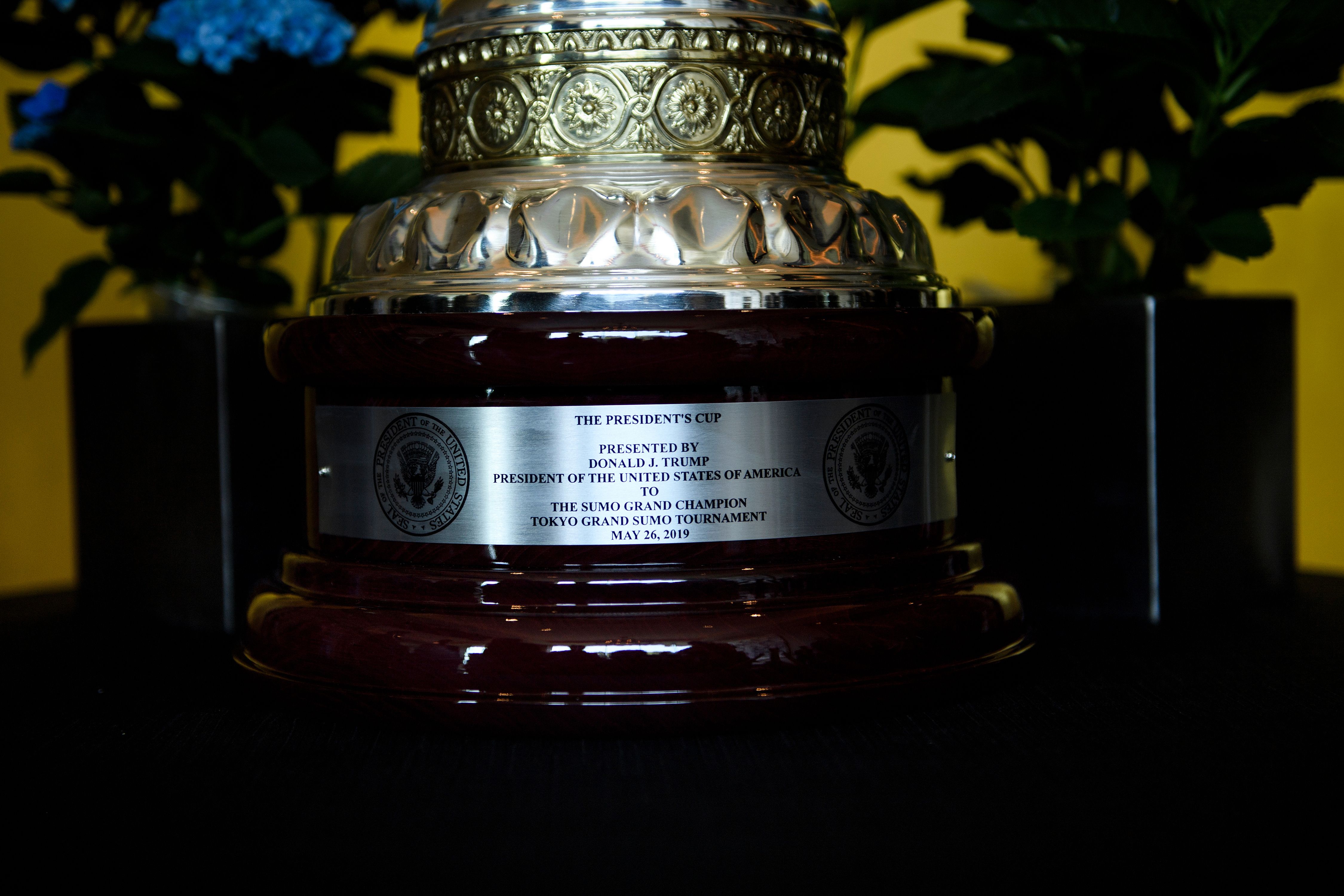 The President’s Cup, which will be awarded to sumo wrestler Asanoyama by US President Donald Trump during the Summer Grand Sumo Tournament, is kept on display at Palace Hotel in Tokyo on May 26, 2019. (Photo by BRENDAN SMIALOWSKI/AFP/Getty Images)

“In honor of your outstanding achievement as sumo grand champion, I hereby award you the President’s Cup,” POTUS said.

After the sumo match, the Abe’s and the Trump’s headed to a hibachi restaurant to have dinner. The couples dined on Japanese potato, grilled chicken, wagyu beef steak, salad, and ice cream. 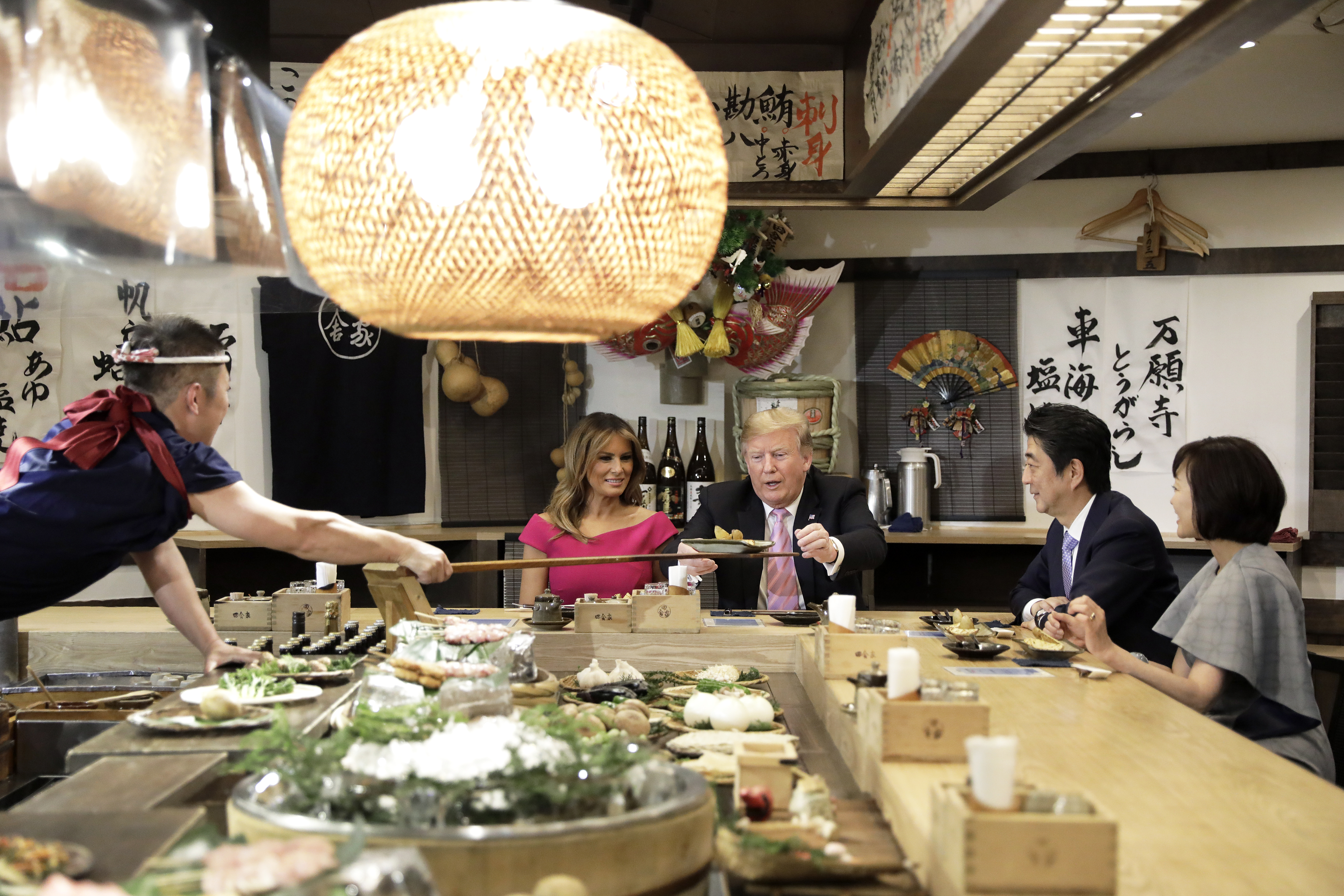 TOKYO, JAPAN – MAY 26: U.S. President Donald Trump, center, is served a baked potato with butter while sitting at a counter with First Lady Melania Trump, second left, Shinzo Abe, Japan’s Prime Minister, second right, and Akie Abe, wife of Shinzo Abe, right, during a dinner at the Inakaya restaurant in the Roppongi district on May 26, 2019 in Tokyo, Japan. (Photo by Kiyoshi Ota – Pool/Getty Images)

Trump and Melania became the first foreign leaders on Monday to visit with Naruhito, the new Japanese emperor, and Masako, the empress. The first couple visited with them at the Imperial Palace, where they participated in a lavish welcome ceremony that featured the U.S. and Japanese national anthems. 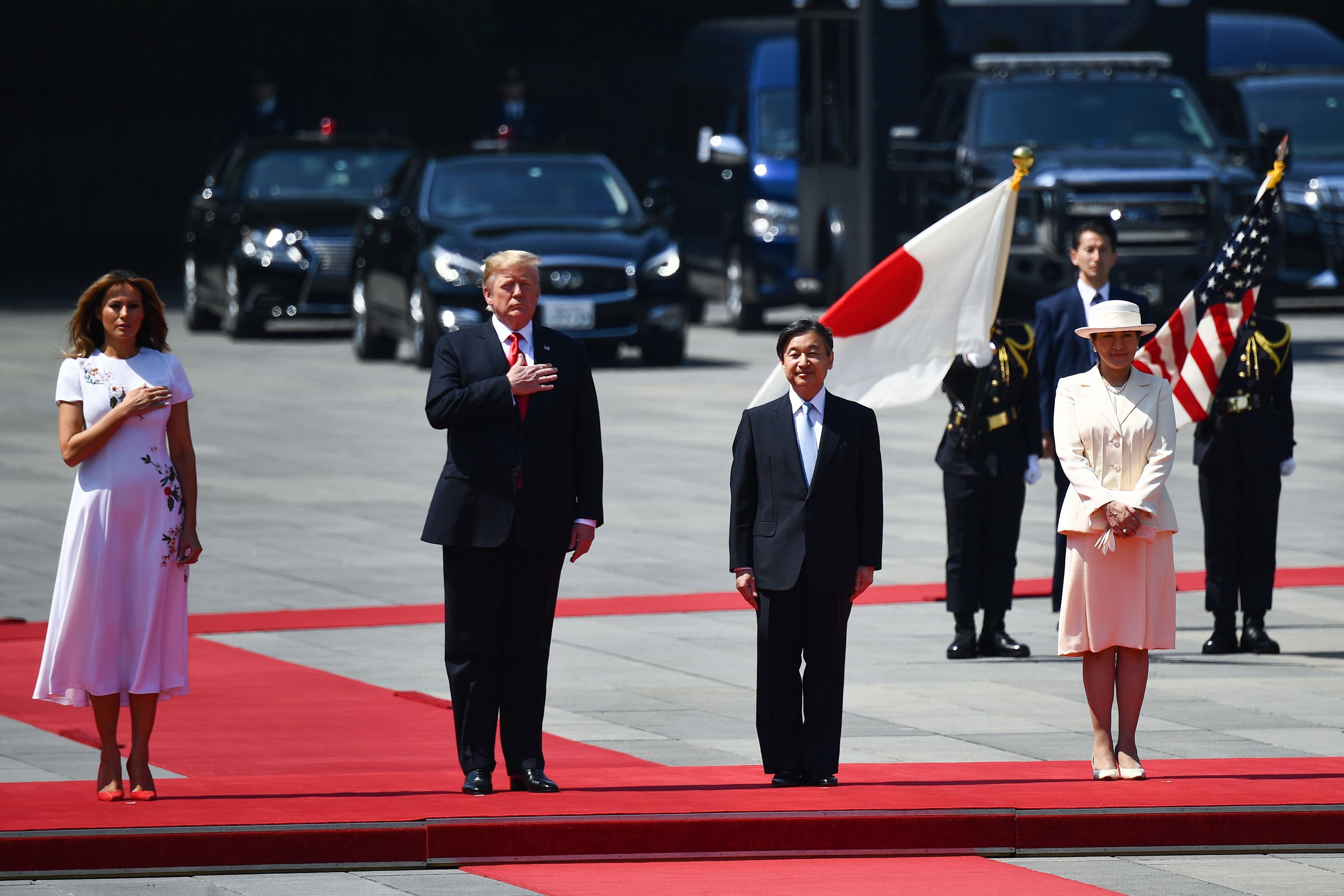 (L-R) US First Lady Melania Trump, US President Donald Trump, Japan’s Emperor Naruhito and Empress Masako attend a welcome ceremony at the Imperial Palace in Tokyo on May 27, 2019. (Photo by BRENDAN SMIALOWSKI/AFP/Getty Images)

The two couples exchanged gifts during a state call following the welcome ceremony.

The gifts, according to the White House:

The Emperor presented the President with a traditional Japanese pottery and porcelain bowl as well as a signed and framed photo of His Majesty the Emperor.

The Empress presented the First Lady with an ornamental Japanese lacquer box with traditional design as well as a framed and signed photo of Her Majesty the Empress.”

Trump met with PM Abe for bilateral meetings and a working lunch to discuss a series of policy issues, including trade and North Korea.

“A lot of very positive things are happening on trade. I personally think that lots of good things will come with North Korea, I feel that. I may be right, I may be wrong, but I feel that,” Trump told reporters at the top of the bilateral. “Trade-wise, I think we’ll be announcing some things probably in August. We have to do a little catching up with Japan. They’ve been doing much more business with us we’d like to do a little business in the reverse.”

“We’ll get the balance of trade straightened out rapidly,” he added. 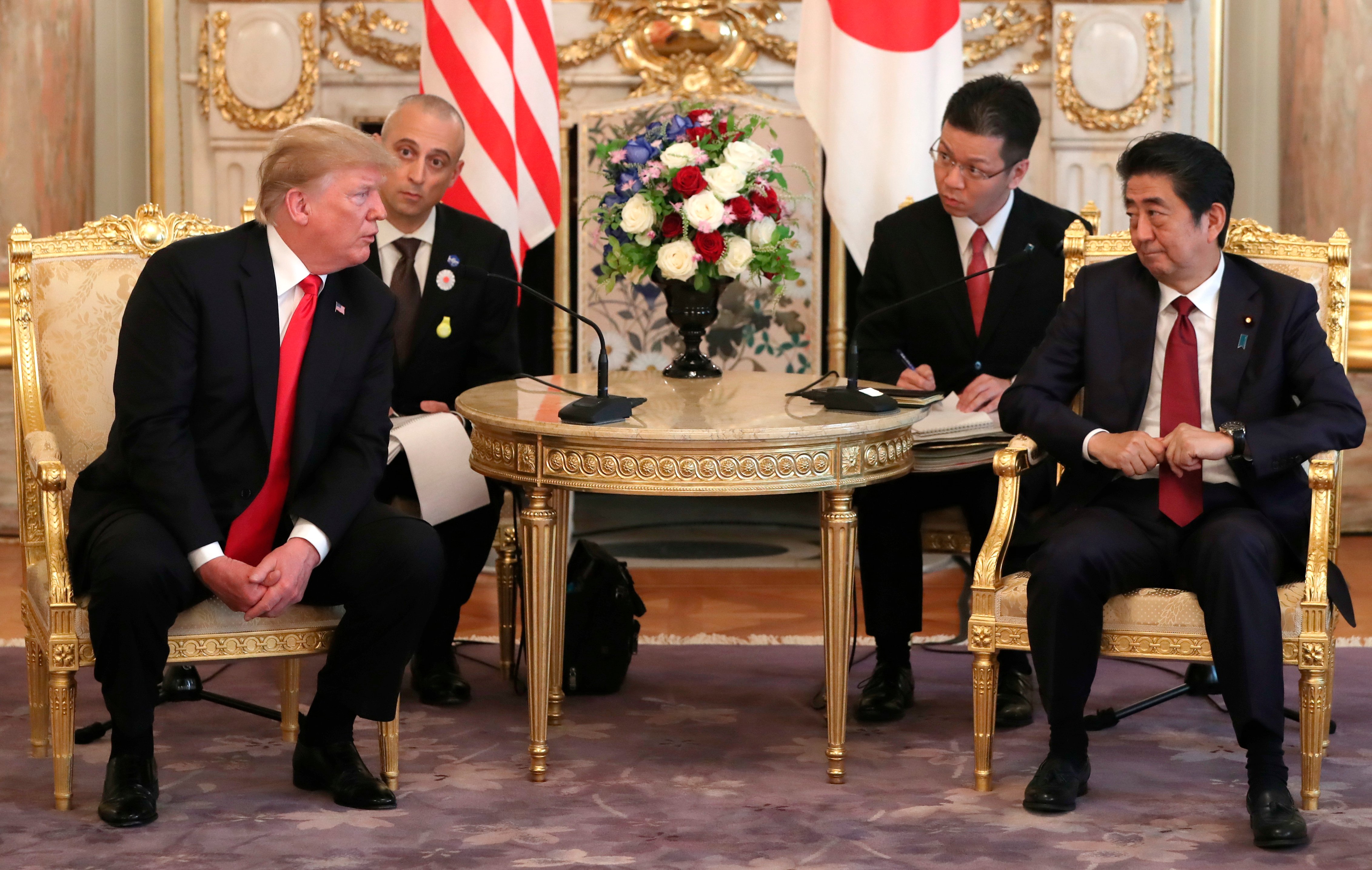 The president differed from Abe on the North Korea threat, brushing off concerns about recent missiles tests, while Abe said they were “extremely regrettable.”

Melania broke off from Trump again during the bilateral meetings to participate in a cultural event with Akie Abe at Akasaka Palace. The first lady met with the founder of Shine On! Kids, a nonprofit for sick children, and then watched a flute performance by master flutist Yosuke Irie. 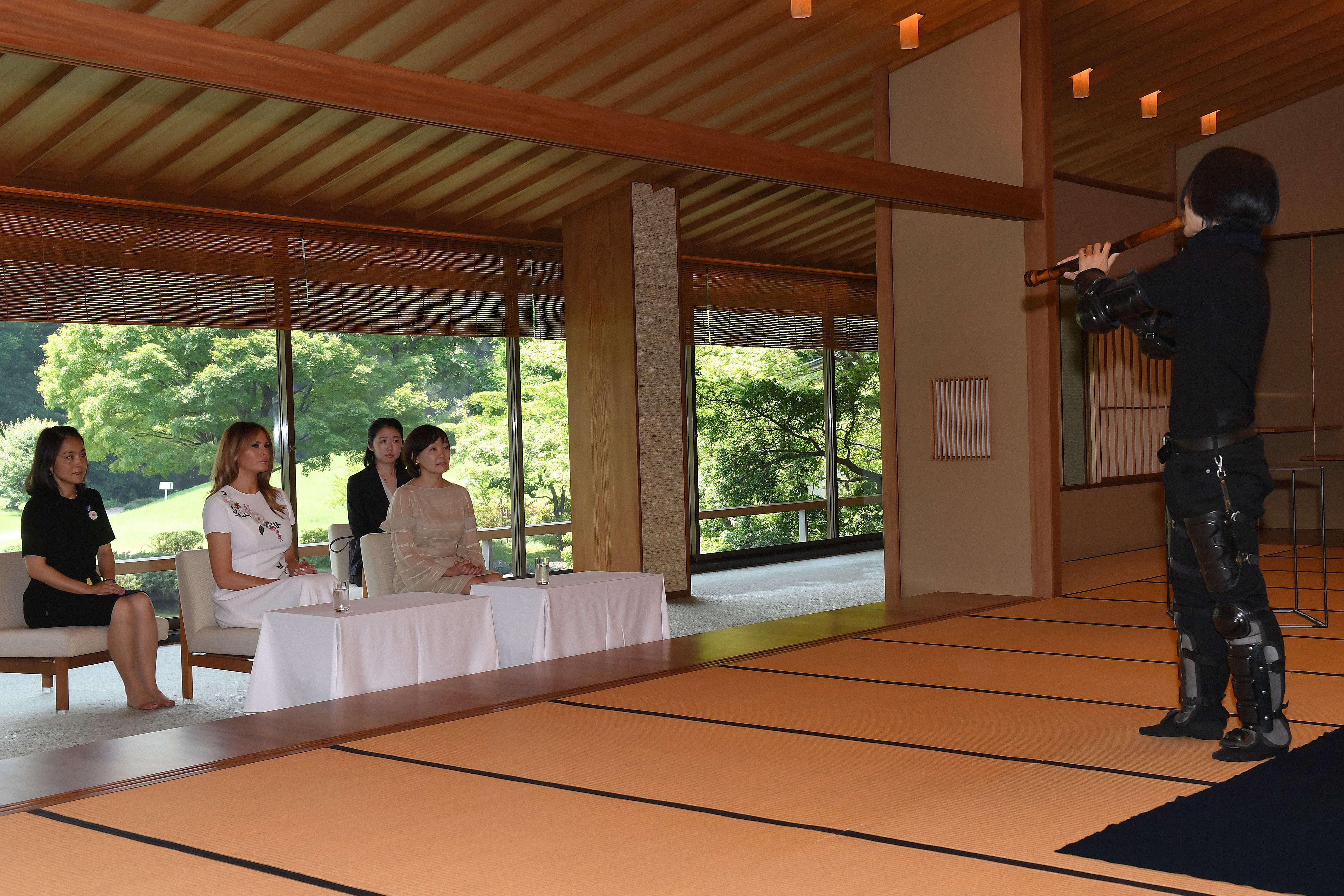 A flower arrangement demonstration followed the flute performance, along with a children’s dance. The two ladies then visited the koi pond in the palace. 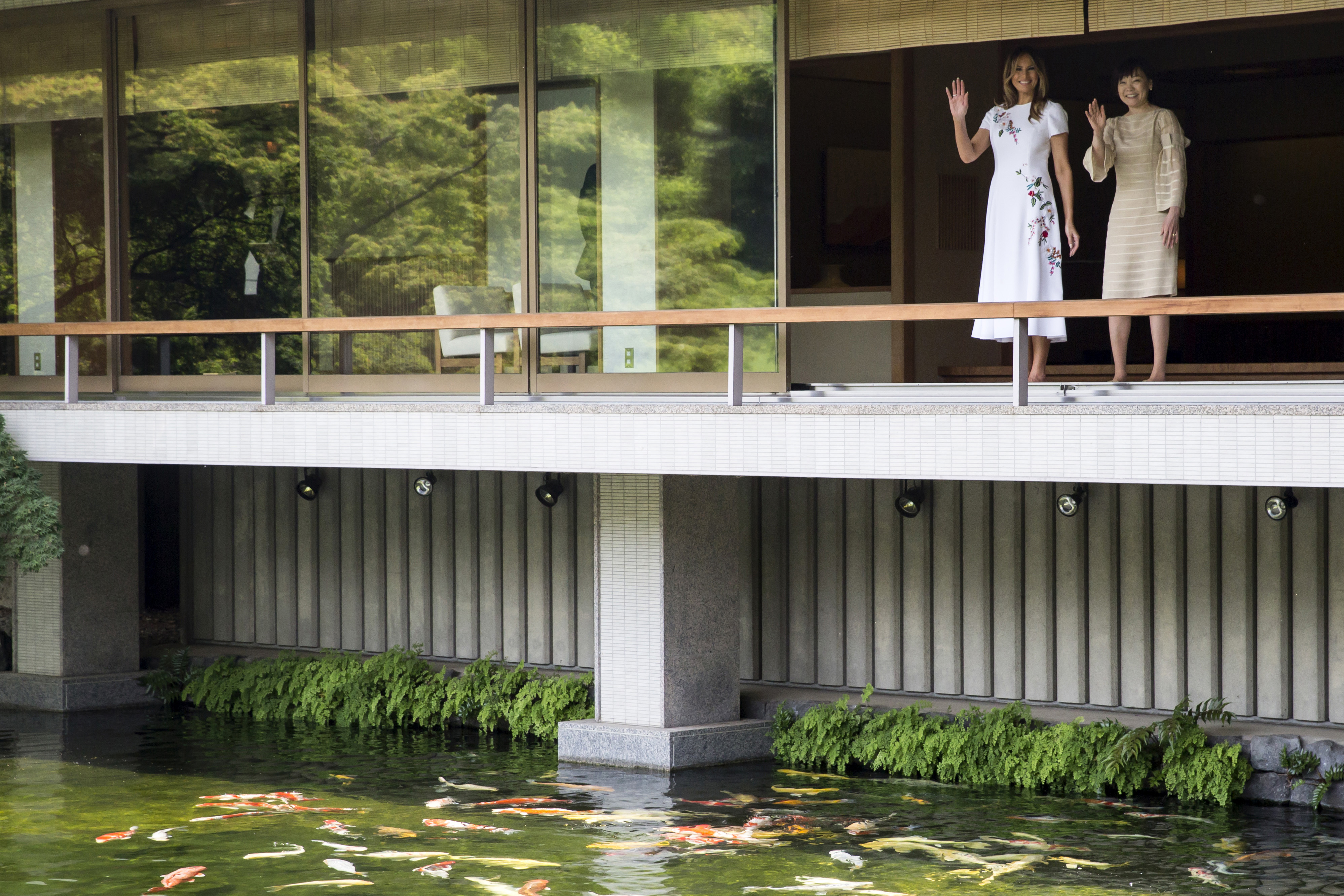 US First Lady Melania Trump (L) and Akie Abe, wife of Japanese Prime Minister Shinzo Abe (R) wave after looking at koi carps in a pond at the Japanese style annex inside the State Guest House in Tokyo on May 27, 2019. (Photo by Tomohiro Ohsumi / POOL / AFP) (Photo credit should read TOMOHIRO OHSUMI/AFP/Getty Images) 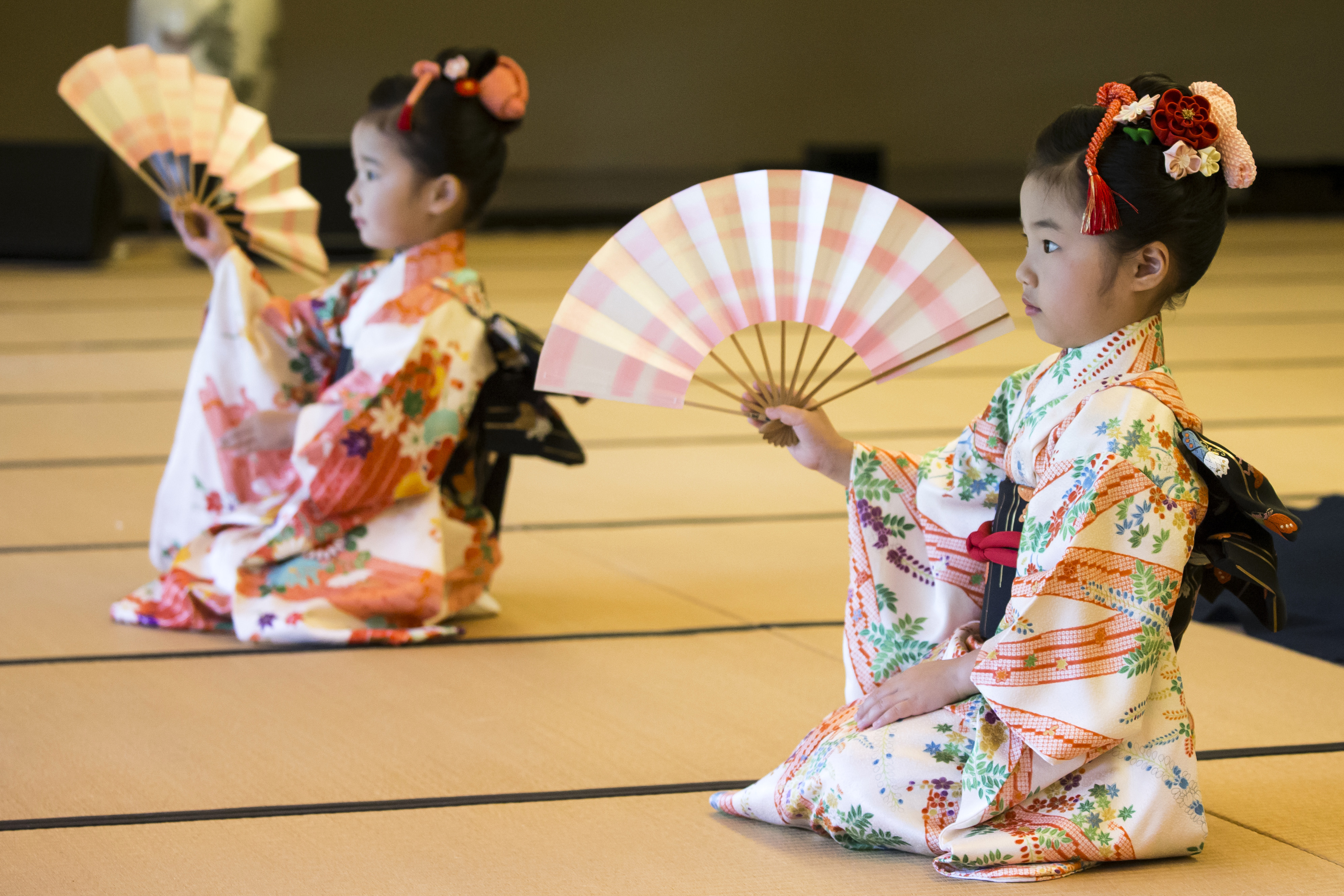 TOKYO, JAPAN – MAY 27: Children perform a traditional dance for U.S. First Lady Melania Trump and Akie Abe, wife of Japanese Prime Minister Shinzo Abe (both not pictured) during a cultural event at the Japanese style annex inside the State Guest House on May 27, 2019 in Tokyo, Japan. President Donald Trump is on the third day of a four day state visit to Japan, the first official visit of the country’s Reiwa era. (Photo by Tomohiro Ohsumi/Getty Images)

After the bilateral meetings and cultural event, Trump and Melania and Abe and Akie paired up again to meet with the Japanese families of individuals abducted by the North Korean regime. Trump and Abe pledged to work together to bring the family members home, and the president noted that this was his second meeting with the families. 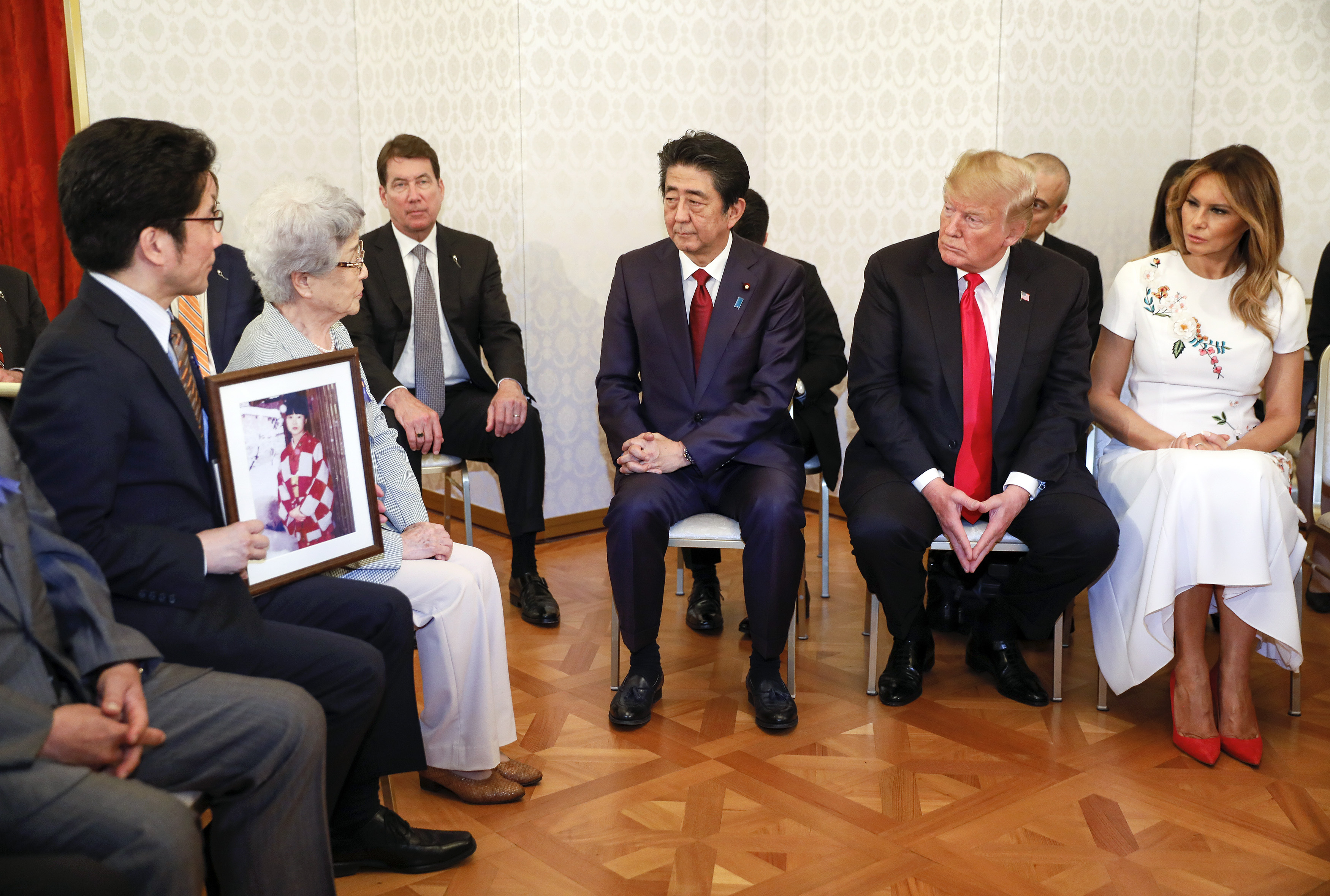 TOKYO, JAPAN – MAY 27: US President Donald Trump listens to Sakie Yokota (2-L), the mother of Megumi who was kidnapped by North Korean agents at the age of 13 in 1977, as he meets the families of Japanese abductees by North Korea with First Lady Melania (R), Japanese Prime Minister Shinzo Abe (C) at Akasaka State Guesthouse on May 27, 2019 in Tokyo, Japan. (Photo by Kimimasa Mayama – Pool/Getty Images)

Trump and Melania returned to the Imperial Palace for a state dinner hosted by Emperor Naruhito and Empress Masako. The couples sported gala attire, with the president in a tuxedo and Melania in a long white gown, and dined on a six-course meal. (RELATED: Melania Stuns In Gorgeous Floor-Length White Gown At State Banquet In Tokyo) 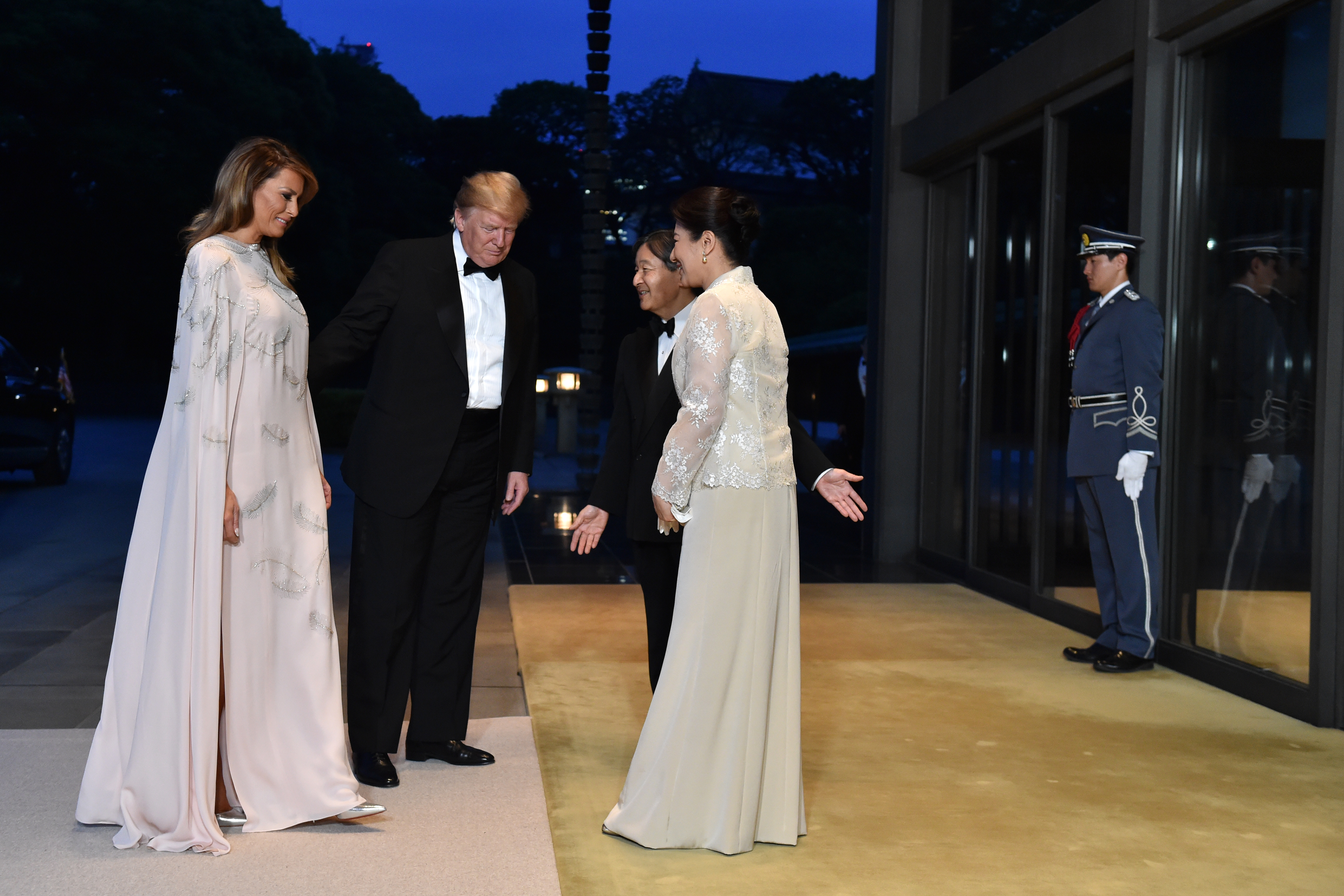 TOKYO, JAPAN – MAY 27: US President Donald Trump (2nd L) and First Lady Melania Trump (L) are greeted by Japan’s Emperor Naruhito and Empress Masako upon their arrival at the Imperial Palace for a state banquet on May 27, 2019 in Tokyo, Japan. (Photo by Kazuhiro Nogi – Pool/Getty Images)

An orchestra played the Star Spangled Banner and Trump gave a toast to the dinner guests, stating that he was “profoundly honored” to be present at the event.

The president and PM Abe stopped at a Japanese military ship, the JS Kaga, to tout the alliance between the two countries and praise the Japanese and American troops.

Trump then headed to the USS Wasp to give a Memorial Day address to American troops. Several U.S. troops had patches that said “Make Aircrew Great Again” and featured a cartoon that resembled President Trump. 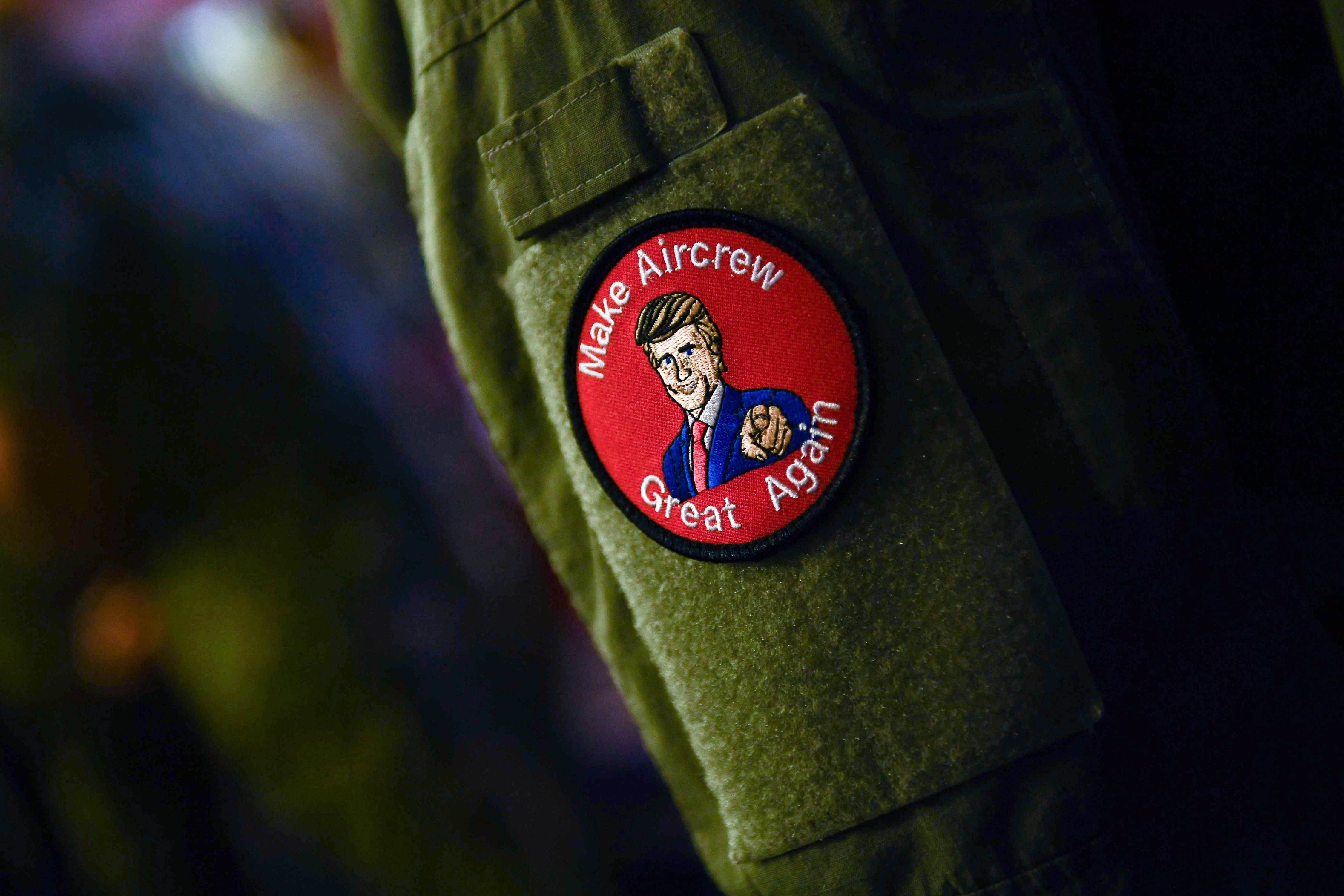 TOPSHOT – A US Marine wearing a badge listens to US President Donald Trump during a Memorial Day event aboard the amphibious assault ship USS Wasp (LHD 1) in Yokosuka on May 28, 2019. (Photo by BRENDAN SMIALOWSKI/AFP/Getty Images) 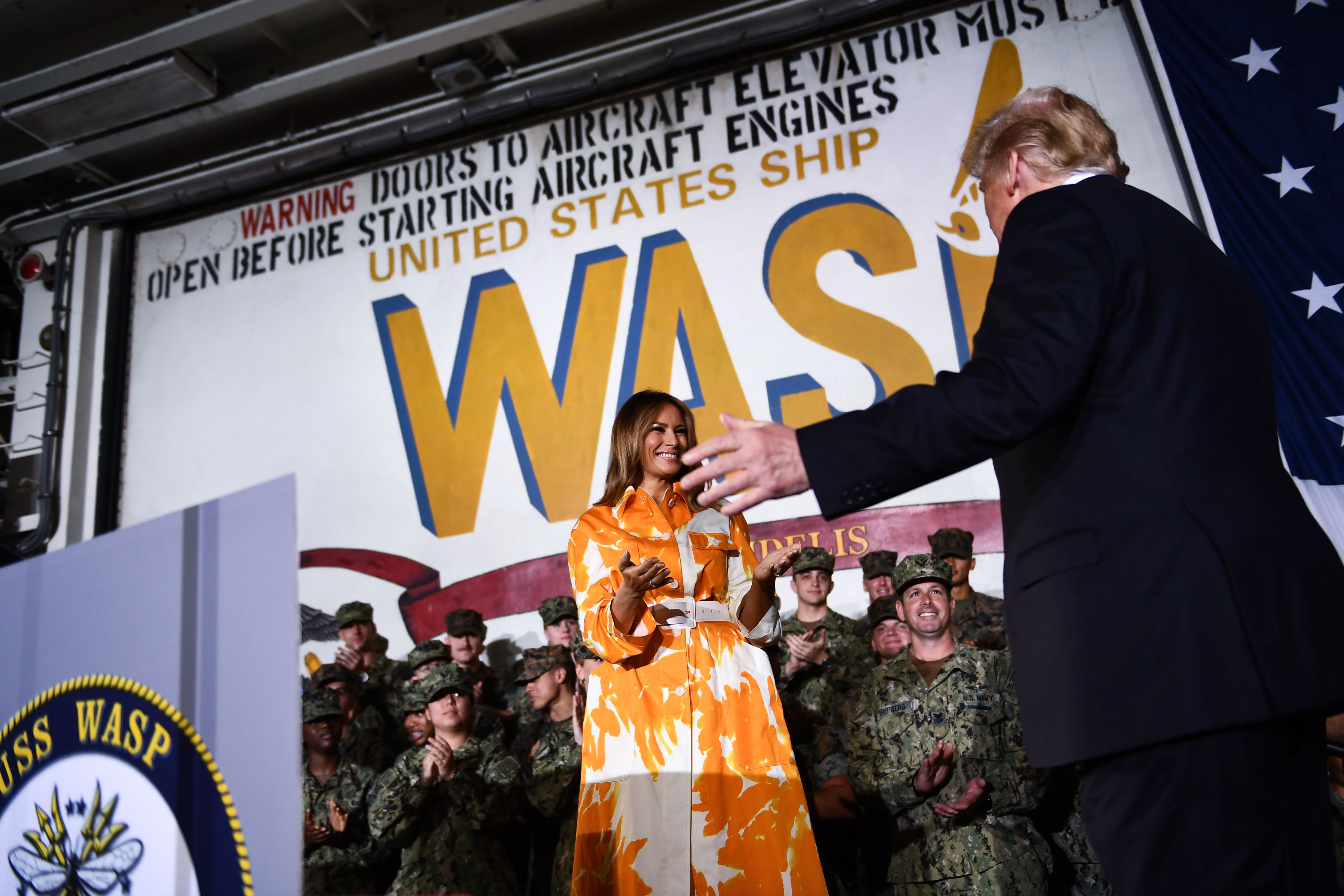 US President Donald Trump and First Lady Melania Trump arrive on stage during a Memorial Day event aboard the amphibious assault ship USS Wasp (LHD 1) in Yokosuka on May 28, 2019. (Photo by BRENDAN SMIALOWSKI/AFP/Getty Images)

“I have to wish you all a very Happy Memorial Day,” the president told the troops, commending their bravery and noting that soldiers leave home knowing they may never come back. 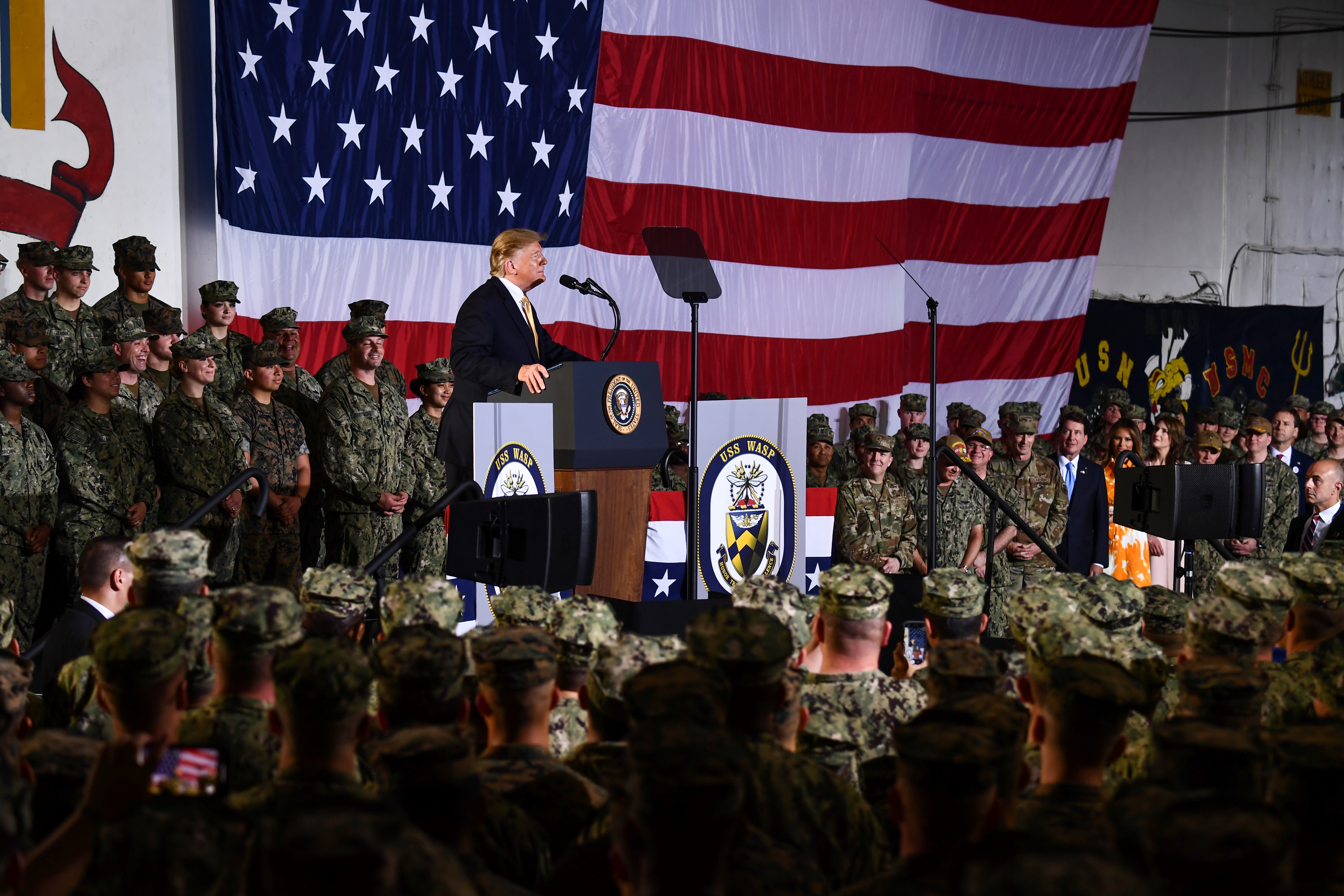 US President Donald Trump speaks during a Memorial Day event aboard the amphibious assault ship USS Wasp (LHD 1) in Yokosuka on May 28, 2019. (Photo by BRENDAN SMIALOWSKI/AFP/Getty Images)

Trump and First Lady Melania will arrive back at the White House after the eventful trip on Tuesday afternoon.