A member of Antifa was arrested on Monday after he attempted to jail the College Republicans club during a speaking engagement at The University of Washington.

Chevy Swanson, president of the UW College Republicans, told The Daily Caller that the group invited OCF to speak about their man-on-the-street videos, as well as the “backlash they have faced for being a black conservative and a Muslim conservative.”

The local Antifa Emerald City faction caught wind of the meeting and encouraged members to sabotage the UW College Republicans’ event via their Facebook page. The speech was held in a Thompson Hall lecture room as part of the final meeting of the College Republicans. (RELATED: New Details Emerge About The Woman Who ‘Milk-Shaked’ Rep. Matt Gaetz) 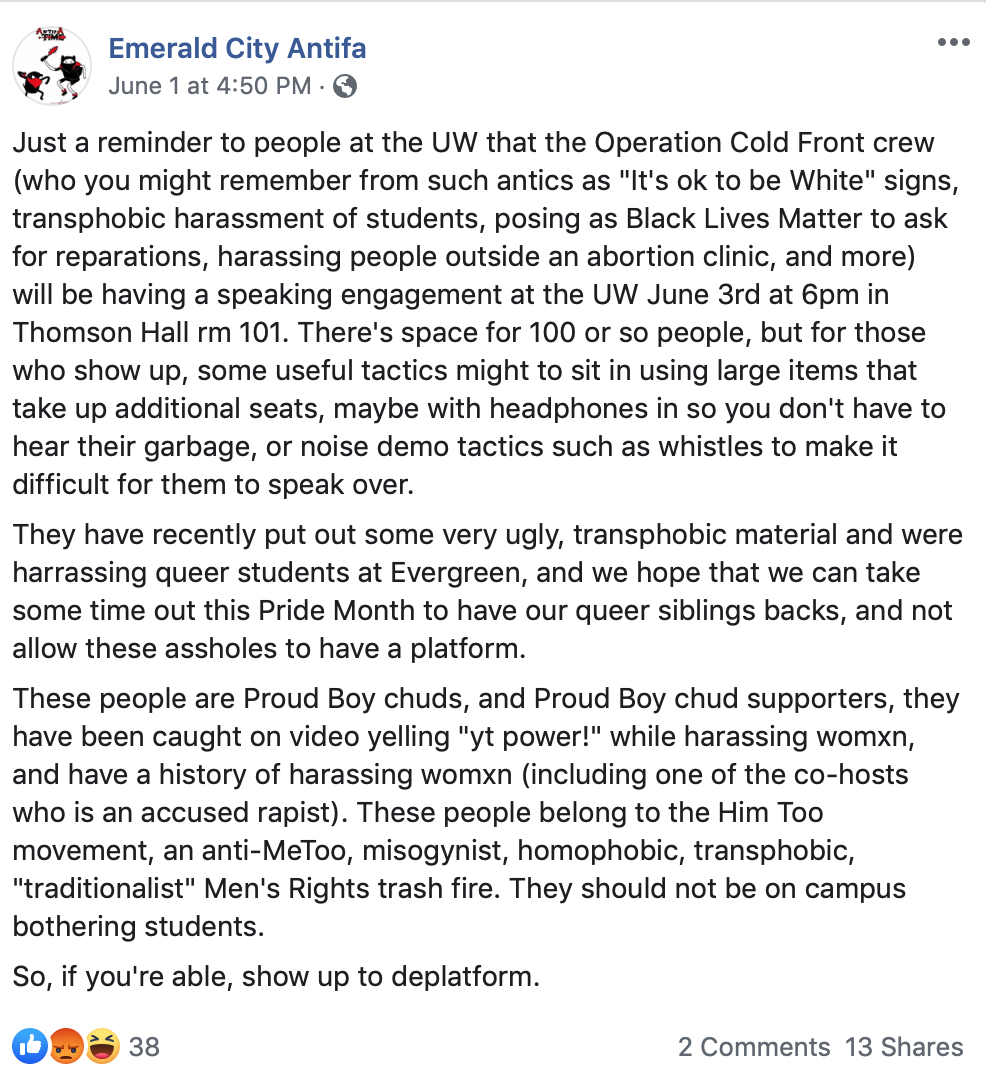 The one Antifa member who did show up did more than just sabotage the event. Wearing a black balaclava mask, he attempted to imprison the UW College Republicans in the room by locking the door with a master padlock and chain.

“About 45-50 minutes into the event, we heard rattling and we saw a masked guy trying to chain the doors shut,” Swanson explained. “We pushed on the door to force it open, hoping the chain hadn’t already been locked. It opened and the chain fell to the ground. The masked guy ran off and some of our people chased him and held him until police arrived.”

The official University of Washington police report confirmed that the Antifa member had failed to properly lock one of the doors (leaving the other alone), as the loud noise of clanging chains alerted occupants in time for them to escape the room.

Several individuals attending the meeting immediately chased the Antifa member to the nearby Husky Union Building (HUB), where he was later arrested by officer Jody Daigle for disorderly conduct.

‘Antifa’ member caught trying to imprison Republican students in a UW classroom in Seattle, chaining the door shut during a College Republicans meeting.

Chains make noise, as it turns out.

The Antifa member, whose name has not yet been publicly released by police, is an 18-year old white male who attends a special high school class on campus. Attendee Zachary Staggs and UWCR’s Swanson are identified as the victims in the report.

An article posted Wednesday in UW’s online student newspaper, The Daily, suggested that the College Republicans were at fault and the real victims were attendees at a queer student group’s end-of-quarter picnic.

An end-of-quarter picnic put on by a queer student group was violently interrupted on Monday afternoon when a group of MAGA-hat-wearing men sprinted through the HUB lawn, attempting to perform a “citizen’s arrest” on an 18-year-old man.

The article labeled OCF as an “anti-feminist” channel that “specialized in provoking liberal reactions” and noted that a number of those at the queer student event had feared for their safety.

One student identified only as “Andy” described the scene, saying, “We were just trying to hide any gay pride pins or anything we had on us so they wouldn’t see it. I mean, some of us were crying by the end of it all.”

Several of the members of the queer student group complained about how campus police handled the incident. The Antifa member was the only arrest made.

Video of the event can be viewed on OCF’s YouTube account. The interruption occurs just after the 50:00 mark.