Nearly 1,000 Central American migrants on their way to the United States were blocked or detained by Mexican military police Wednesday along a highway in southern Mexico.

The migrants were on their way to Tapachula from the Mexico-Guatemala border when their advance was blocked by around 200 Mexican immigration agents, federal police and military police near the Mexican town of Metapa, according to a Wednesday AP report.

And it was no easy feat, according to the report:

Unarmed agents wrestled some migrants who resisted to the ground, but the vast majority complied and boarded buses or immigration agency vans. Some migrants fainted and fell to the ground. One young man who collapsed was taken for medical attention.

Some parents sat on the pavement with their children, wept and begged authorities not to take them. Others jumped wire fences and ran into the thick forest beside the highway.

Around 420 migrants reportedly agreed to be taken to a Tapachula migrant detention center to be processed, according to the National Immigration Institute, which also noted that authorities would help some return home. 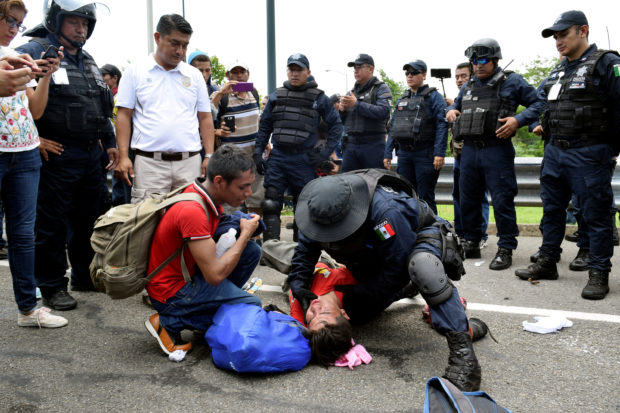 A federal police officer checks the head of an injured migrant during a joint operation by the Mexican government to stop a caravan of Central American migrants on their way to the U.S., at Metapa de Dominguez, in Chiapas state, Mexico June 5, 2019. REUTERS/Jose Torres

President Donald Trump’s plan to impose a 5% tariff on Mexico until the country takes a larger role in helping to curb immigration through their country has been met with staunch opposition from a significant percentage of Senate Republicans.

On June 10th, the United States will impose a 5% Tariff on all goods coming into our Country from Mexico, until such time as illegal migrants coming through Mexico, and into our Country, STOP. The Tariff will gradually increase until the Illegal Immigration problem is remedied,..

“There is not much support in my conference for tariffs, that’s for sure,” Senate Majority Leader Mitch McConnell said on Tuesday.

Yet Mexico agreed to come to the bargaining table as Mexican Foreign Minister Marcelo Ebrard met with Vice President Mike Pence, Secretary of State Mike Pompeo and other U.S. officials on Wednesday. They failed to reach a deal, but Trump noted the “progress” being made, though “not nearly enough.” (RELATED: Mexican Official Leading Tariff Negotiations Compared Trump To Hitler)

Immigration discussions at the White House with representatives of Mexico have ended for the day. Progress is being made, but not nearly enough! Border arrests for May are at 133,000 because of Mexico & the Democrats in Congress refusing to budge on immigration reform. Further…

AP noted Mexico’s use of “raids and roadside checkpoints to discourage highway marches such as the massive migrant caravans that occurred in 2018 and early 2019,” likely in response to U.S. pressure.