Rashida Tlaib’s and Ilhan Omar’s cancelled trip to Israel was sponsored by a Palestinian-based organization whose members have expressed sympathy for terrorist activities and support the BDS movement.

The Israeli government announced Thursday it would not allow Democratic Reps. Rashida Tlaib of Michigan and Ilhan Omar of Minnesota to enter their borders for a planned trip into Palestinian territory, citing the two lawmakers’ support for the Boycott, Divestment and Sanctions (BDS) movement. Under Israeli law, anyone who supports the boycott of Israel may be banned from the country.

“The decision has been made, the decision is not to allow them to enter,” Israeli Deputy Foreign Minister Tzipi Hotovely said to Israel’s Reshet Radio Thursday.

Tlaib had been planning the congressional delegation since at least December 2018, according to an invitation sent to other U.S. lawmakers that year. The trip to the West Bank and Jerusalem was intended to last from Aug. 17 to 22, and act as an alternative to the AIPAC-led delegations for lawmakers who are friendlier to Israel. (RELATED: Trump Jumps On Reports Of Israel Banning Reps. Omar And Tlaib: ‘They Hate … All Jewish People’)

The trip was sponsored by the Palestinian Initiative for the Promotion of Global Dialogue & Democracy, better known as Miftah.

Despite billing itself as a peaceful organization dedicated to promoting Palestine’s democratic institutions, Miftah for years has carried notable ties to terrorist sympathizers, has openly accused Israel of atrocities and supports the boycott of Israeli products.

Hanan Ashrawi, the founder and chair of the Miftah board of directors, brushed off Palestinian terrorist attacks during a January 2017 interview by saying they are “seen by the people as resistance. And you cannot somehow adopt the language of either the international community or the occupier by describing anybody who resists as terrorists.”

Miftah’s own website describes Wafa Idrees, a female suicide bomber, as one of a few young women who chose to “join the ranks of the resistance movement.” Idrees detonated herself in January 2002, killing an 81-year-old and wounding another 150 Israelis. 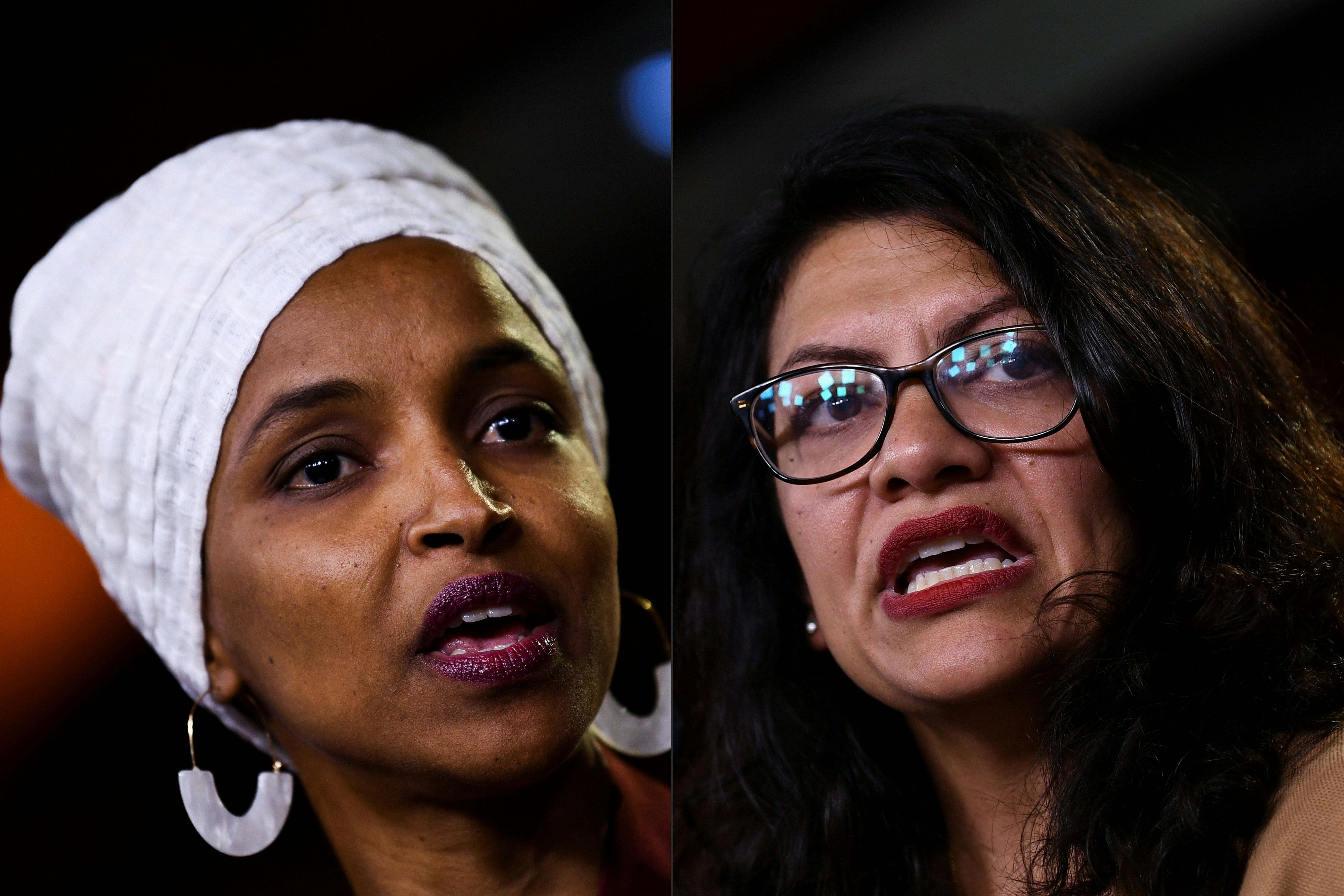 (COMBO) This combination of pictures created on August 15, 2019 shows Democrat US Representatives Ilhan Abdullahi Omar (L) and Rashida Tlaib during a press conference at the US Capitol in Washington, DC on July 15, 2019. (Photos by Brendan Smialowski / AFP) (Photo credit should read BRENDAN SMIALOWSKI/AFP/Getty Images)

Miftah was forced to retract and apologize in 2013 for an article published on its website that accused the Jewish people of using “the blood of Christians in the Jewish Passover.” The Ramallah-based organization had originally defended the writing, but reversed course amid massive outcry.

The Palestinian group holds membership with the Aman Coalition, which has accused Israel of “stealing,” and having “racist goals,” according to the NGO Monitor. Miftah is also a member of the Palestinian NGO Network, which has refused to add its signature to the anti-terror clause, a condition for U.S. government funding.

These details were not lost on Israeli Prime Minister Benjamin Netanyahu.

“[T]he itinerary of the two Congresswomen reveals that the sole purpose of their visit is to harm Israel and increase incitement against it,” the prime minister wrote in a statement published Thursday. “In addition, the organization that is funding their trip is Miftah, which is an avid supporter of BDS, and among whose members are those who have expressed support for terrorism against Israel.”

“Therefore, the minister of interior has decided not to allow their visit, and I, as prime minister, support his decision,” Netanyahu continued.

Sponsorship of Omar and Tlaib’s now-botched trip was not the first for Miftah. The organization sponsored a trip for a group of Democratic lawmakers in 2016, where they met with an alleged member of the Popular Front for the Liberation of Palestine, a terrorist organization. (RELATED: George Soros-Linked Money Used To Promote BDS Movement Against Israel)

Miftah did not respond to a request for comment regarding this article, nor did spokesmen for Tlaib’s and Omar’s offices.