One of the largest pro-Trump super PACs is mobilizing on behalf of Republican candidate Dan Bishop in a North Carolina special election.

The Committee to Defend the President will be spending over $200,000 in independent expenditures on the Bishop campaign ahead of the state’s 9th Congressional District election scheduled for Sept. 10.

The super PAC pledge includes $150,000 on TV advertising across the district, as well as $40,000 on strategic digital advertising, $12,500 on a grassroots team and $5,000 that will go straight to Bishop’s campaign, according to the Committee to Defend the President.

The Committee to Defend the President Chairman Ted Harvey told the DCNF, “The president has actively engaged in this race. Our goal is to make sure we help every ally of the president in the House or the Senate. We have a huge list and a very active membership of Trump supporters across the country.”

“It’s all about turnout. The president is very popular in the district, and with our effort of mobilizing Trump supporters — the Bishop campaign is running a very strong campaign — we should be able to win this campaign. I’m confident he will win,” he continued.

The election in the district President Donald Trump won in 2016 by over 11 percentage points will make up for the 2018 midterm election, reported Politico. 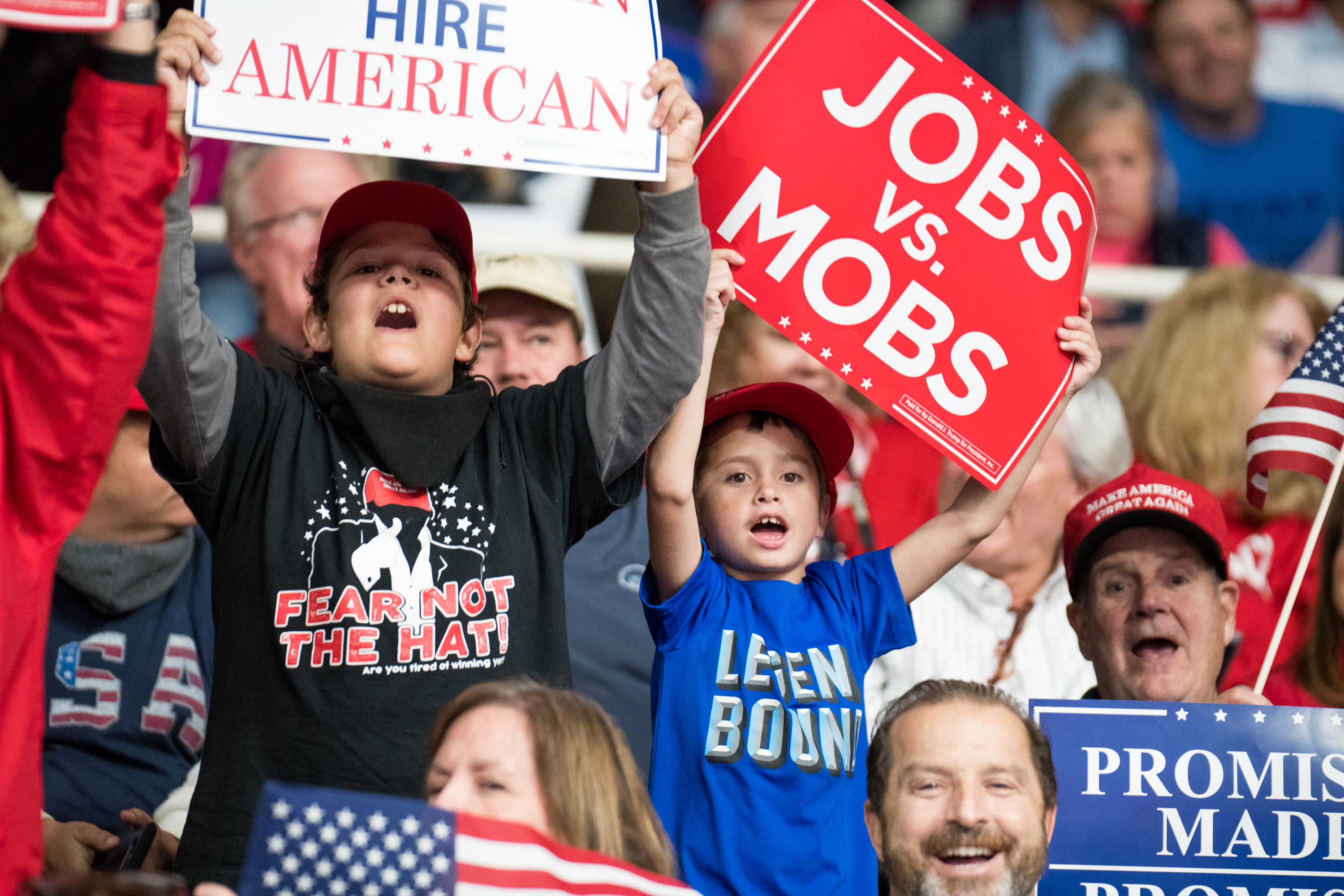 Supporters of President Donald Trump cheer while waiting for the president’s arrival before a campaign rally at the Bojangles Coliseum on October 26, 2018 in Charlotte, North Carolina. (Photo by Sean Rayford/Getty Images)

Bishop is replacing former Republican Mark Harris, who held an unofficial lead of roughly 900 votes during the 2018 election and bowed out of the election in February, citing health concerns. He is running against Democrat Dan McCready. (RELATED: Tears In The Courtroom As Son Of GOP’s Mark Harris Contradicts Him During Ballot Harvesting Hearing)

Harvey cited Republican Tennessee Sen. Marsha Blackburn’s 2018 win as an example of how pulling Trump supporters together during off-year elections could lead to a Bishop win.

“In Tennessee in 2018, Marsha Blackburn was in a tight U.S. Senate race … and we identified 300,000 Trump supporters who typically don’t vote in off-year elections, and our organization sent over $1 million contacting these people and trying to get them out to vote,” he told the DCNF.

Senior adviser to the Bishop campaign Jim Blaine said, according to Politico, “This race is about Donald Trump. Dan’s embraced Trump 100%.”

Blaine added that McCready “started out way ahead in terms of money, organization, name identification and public sympathy because of the circumstances surrounding the 2018 election.”

“If Dan Bishop overcomes those disadvantages and wins, it is a testament to the durability of the Trump coalition and the NRCC and RNC’s and ability to get a full-fledged general election effort stood up in three months,” he continued.

Harvey agreed, adding, “Almost every election — whether it’s this election or the 2020 election — is going to be about Trump. There are two world views right now: open borders, giving aid to illegal immigrants and socialist policies, and the Trump agenda, which is securing borders, helping legal immigrants who will be a benefit to our society and free market capitalism.”

Those are the two world views, and that’s what all of these elections are going to be about. We’re going to take that discussion to the voters, and I believe traditional American values are going to win

Trump tweeted about his support for Bishop on Tuesday, citing McCready’s stance on immigration and gun rights.

Looking forward to being with Dan Bishop in two weeks, in North Carolina. His opponent believes in Open Borders and Sanctuary Cities, and won’t protect your Second Amendment! https://t.co/nSX2yuXAb1

The Republican National Committee has also reportedly spent $1.5 million, which includes funding for Bishop in the special election, across the state as of Tuesday. Additionally, about $4 million has been spent in total across the state by both the National Republican Campaign Committee and the Congressional Leadership Fund, according to Politico.

Bishop did not immediately respond to the Daily Caller News Foundation’s request for comment. Committee to Defend the President chairman Ted Harvey’s comments will be added should they be received.

This post has been updated to include comments from Ted Harvey.