Former Vice President Joe Biden told a reporter in New Hampshire this week that members of the media aren’t doing their jobs right when they report on his repeated gaffes.

Biden addressed his series of verbal flubs, including when he infamously said he was in Vermont when he was really in New Hampshire, during an interview with the Laconia Daily Sun published Friday.

According to the paper, he said that reporting on his gaffes, “allows you guys to avoid doing your job.”

“And your job is to investigate what in God’s name is going on out there. There’s a change in the country, so whether I said Manchester, Vermont, or New Hampshire, or Iowa is irrelevant in terms of what’s going on,” Biden said.

The 2020 presidential contender also addressed his bloody eye that occurred during a CNN town hall this week, blaming it on his contact lenses.

“I think I, you know when you’re taking it out, I think bruised my eye,” he said.

The 76-year-old also said that he had no problem with voters considering his age, telling the Sun, “I’ll completely disclose everything about my health. I’m in good shape.” 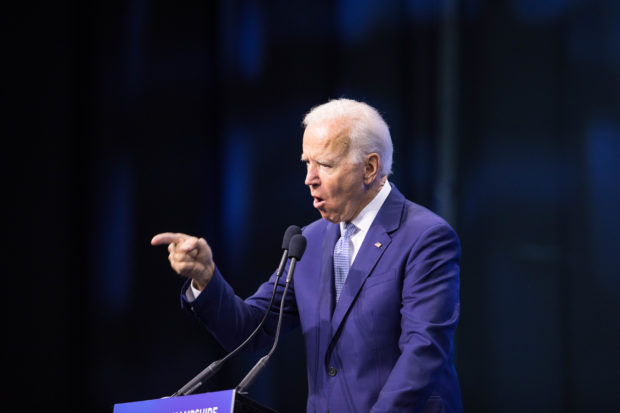 After a number of verbal flubs last month, the Democratic frontrunner tried to comfort voters, telling a crowd of supporters that he wasn’t “going nuts.” (RELATED: Joe Biden’s Recent Gaffes Are Not Uncommon For Him)

Tim Ryan, another contender in the Democratic primary, said Friday that he thought Biden was “declining.”

“I don’t think he has the energy. You see it almost daily. And I love the guy,” Ryan reportedly said.