Establishment media outlets like The Washington Post hyped a now-disputed study that linked President Donald Trump’s campaign rallies to a spike in hate crimes, but they’ve yet to cover a second study that debunked the first one.

The first study, which three Texas university professors conducted, said counties that hosted Trump rallies in 2016 saw a 226% spike in hate crimes compared to places that didn’t host Trump rallies. Harvard University researchers found the political scientists had gotten it wrong when they tried to replicate the study.

“The study is wrong, and yet journalists ran with it anyway,” Harvard researchers Matthew Lilley and Brian Wheaton wrote on Sept. 6 in Reason, a libertarian magazine.

The Texas researchers published their findings in March in the Post in an analysis titled, “Counties that hosted a 2016 Trump rally saw a 226 percent increase in hate crimes.” The Post cited the study in several articles published since then.

Other media outlets echoed the analysis.

“US counties where President Donald Trump held a campaign rally saw a 226% increase in reported hate crimes over similar counties that did not hold a rally,” Business Insider reported in March, citing the article.

The Associated Press cited the study in an August article titled, “Trump words linked to more hate crime? Some experts think so.” 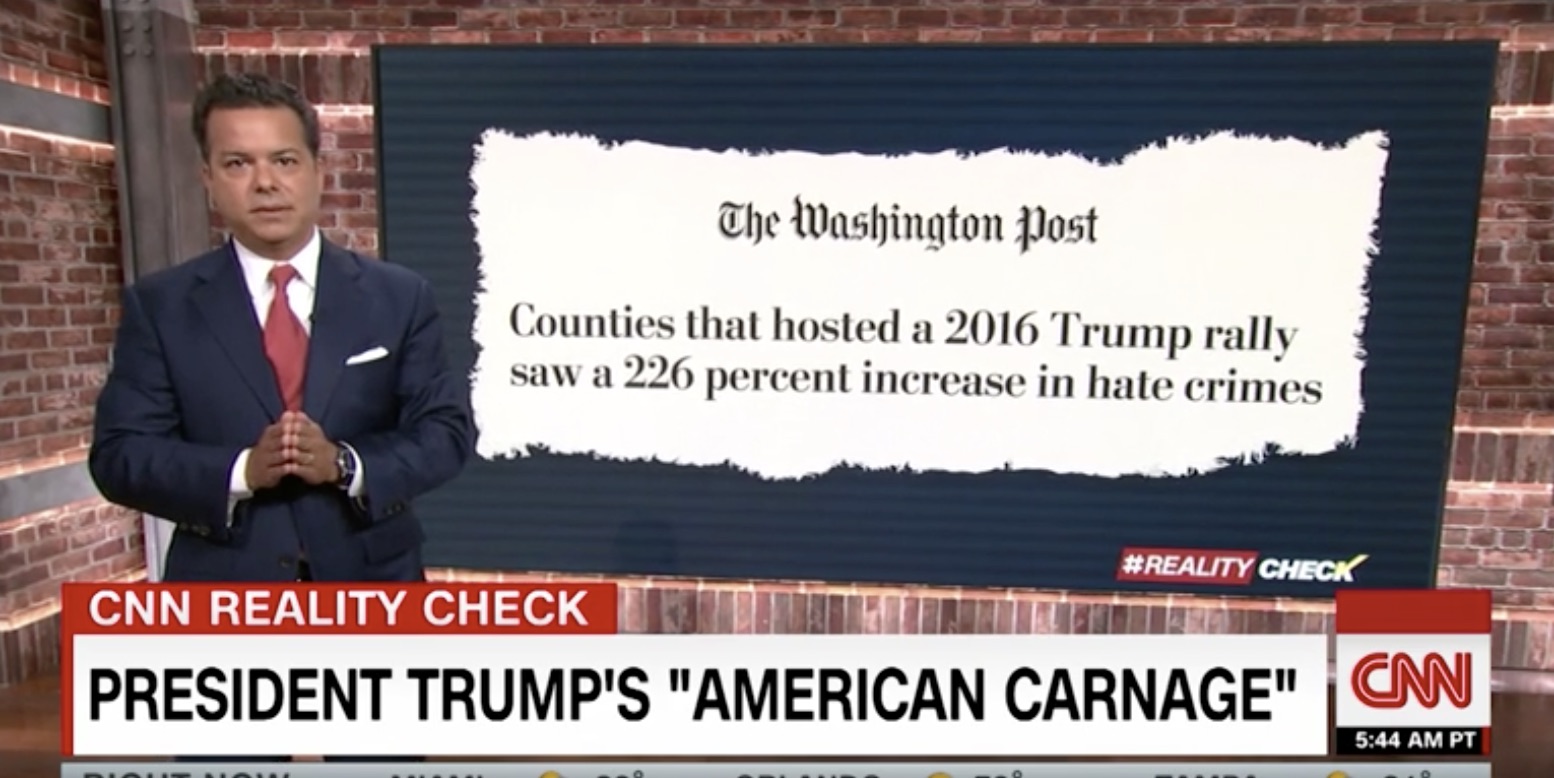 The Harvard University researchers found that “adding a simple statistical control for county population to the original analysis causes the estimated effect of Trump rallies on reported hate incidents to become statistically indistinguishable from zero.”

Lilley and Wheaton found using the criteria relied upon for the first study that rallies for former Democratic nominee Hillary Clinton “contribute to an even greater increase in hate incidents than Trump rallies.” (RELATED: New York Times Editor Made A Graph Showing The Democrats Pivoted Far-Left. He Used It To Call Republicans Far-Right)

“Given how little scrutiny was required to reveal the flaws in the thesis that Trump rallies cause hate incidents, one cannot help but wonder whether its viral status was aided by journalists predisposed to believe its message,” they added.

Only Business Insider has updated its coverage as of Wednesday.

“In September 2019, two Harvard researchers published a refutation of this study in the Libertarian-leaning publication Reason,” reads the update, which Business Insider posted at the bottom of the article Wednesday following an inquiry from the Daily Caller News Foundation.

Molly Gannon, a spokeswoman for the Post, said the original article was published on The Monkey Cage, an academic blog that runs on the Post’s website.

Gannon said the blog “operates independently” and directed the DCNF to the blog’s editor, John Sides. Sides declined to comment other than to recommend reaching out to the original study’s authors.

“The truth that is being masked by this entire back and forth is that to confirm model validity often requires many hours (and days) of testing and retesting. The idea that transforming a single variable invalidates a whole series of analyses and models produced by Ph.D. holding researchers lacks face validity,” Ayal Feinberg, one of the Texas researchers, told the DCNF in an email.

Feinberg said that “there are several methodological questions that [Lilley and Wheaton] have not answered and claims where we fundamentally disagree.”

The AP, Vox and CNN didn’t return the DCNF’s inquiries on whether they would update their coverage of the disputed study.