New York labor groups are looking to change existing state law to resemble a California bill that would recognize some rideshare drivers as employees rather than independent contractors.

Most Lyft and Uber drivers are recognized under New York law as independent contractors rather than employees, meaning New York’s wage and hour laws do not cover them, The Wall Street Journal reported Sunday.

“We think this is really a core fight about what the future of our economy will look like and whether we will be moving forward in a society where new technology won’t be used to degrade people’s standards,” Service Employees International Union 32BJ Secretary-Treasurer Larry Engelstein told WSJ.

The state’s workers’ compensation and unemployment insurance also do not cover independent contractors in New York.

New York City’s Taxi and Limousine Commission put regulations in place that aim to control app-based companies such as Lyft and Uber with a guaranteed hourly wage of $17.22 after expenses. Both companies said such a guarantee would cause fares to increase and driver earnings to decrease, WSJ reported. 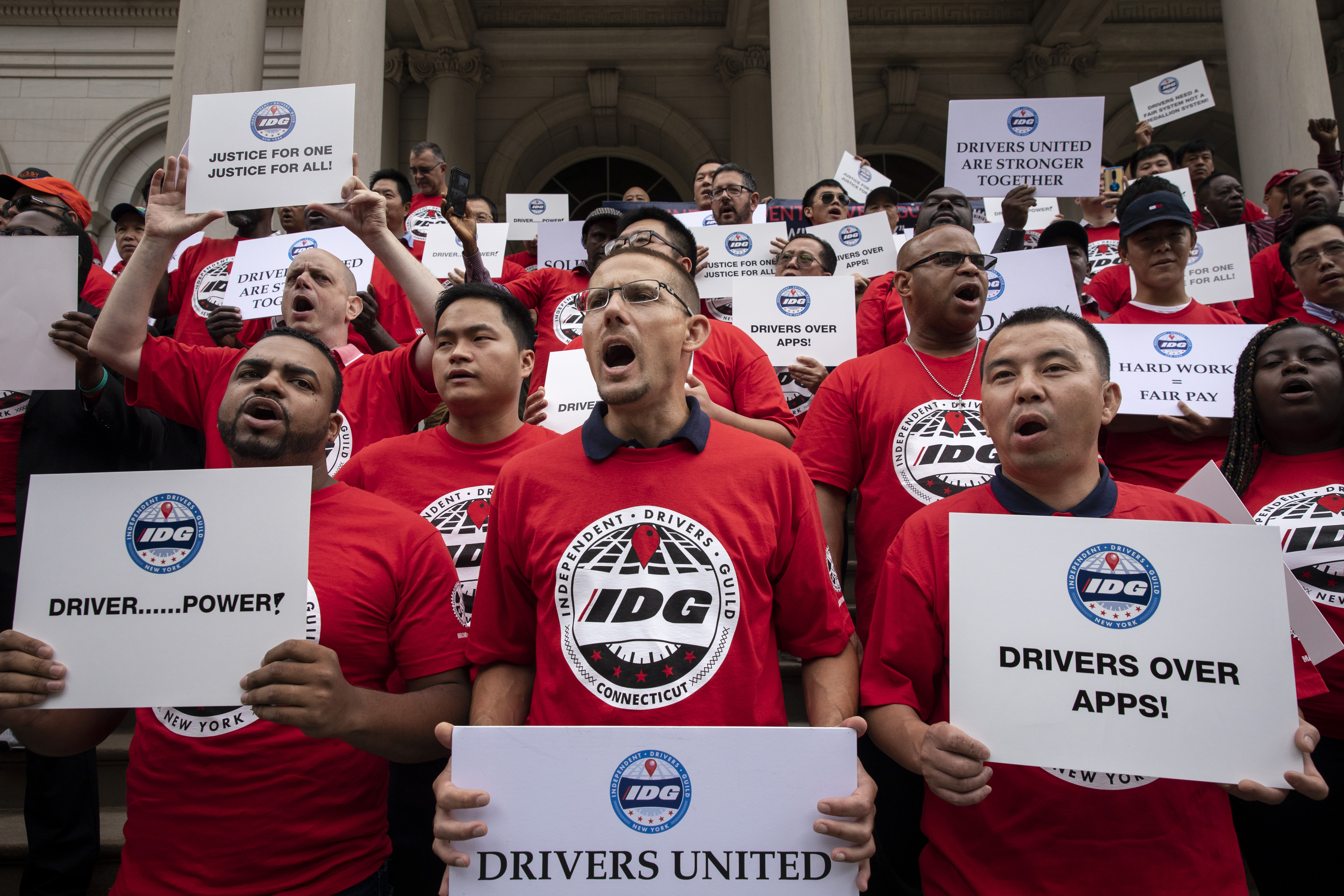 Rideshare drivers and supporters with the Independent Drivers Guild protest outside New York City Hall as they rally for wage enforcement and a drivers’ bill of rights, on Sept. 10, 2019 in New York City. (Photo by Drew Angerer/Getty Images)

Lyft, for example, no longer allows drivers to log onto apps to pick up riders in unpopular areas of the city because they don’t want to pay the minimum-wage requirement for drivers who are less likely to get customers.

“Once you have protections under state law, you, as a sector of workers, get to enjoy the universal strength of millions of workers across that state,” she said.

The interest in such legislation from New York labor groups comes after the California State Senate and Assembly passed AB5 last week. Uber, Lyft and DoorDash threatened to spend a collective $90 million to lobby against the bill.

“As a driver, you can work almost as much or as little as you want, cash out your pay instantly, take a break at a moment’s notice, or even go on a six-month vacation,” Harry Campbell, the founder of rideshare blog The Rideshare Guy and a former part-time Uber and Lyft driver, wrote in a New York Times op-ed Monday.

A bill that would classify gig workers in California as legal employees is headed to the Governor’s desk. One uber/lyft told us he’s not a fan: “I make my own hours, drive where and when I want.” https://t.co/rDJNzNttH9

“This flexibility and that feeling of not having a boss makes ride-hail driving stand out in the vast array of service jobs and low-wage work. … But the drivers who actually want to remain independent contractors are rightly worried that the flexibility they love will disappear. Turning them into employees, as AB5 intends, turns driving into just another job,” he concluded.

Lyft said in a statement to the Daily Caller News Foundation after California’s state Senate passed AB5 on Sept. 10 that the state “political leadership missed an important opportunity to support the overwhelming majority of rideshare drivers who want a thoughtful solution that balances flexibility with an earnings standard and benefits.”