President Donald Trump told reporters Tuesday that he has narrowed down his next pick for national security adviser to five finalists.

Last week, the president announced on Twitter that he asked national security adviser John Bolton for his resignation because he, “disagreed strongly with many of his suggestions, as did others in the Administration.” Bolton denied that the president asked him to resign, instead asserting that he had offered his own resignation the night prior. (RELATED: Trump Fires National Security Adviser John Bolton)

Trump has yet to name a new national security adviser, but on Tuesday, he revealed his top five picks:

Retired Army Lt. Gen. Keith Kellogg was reportedly in talks to be Trump’s national security adviser after Gen. Michael Flynn resigned in 2017, and served as the acting adviser for some time while the president chose a replacement. He is a career Army officer who was integral in the invasion of Iraq. He also handled defense issues for the president’s transition team after his election in 2016 and served as chief of staff to H.R. McMaster. 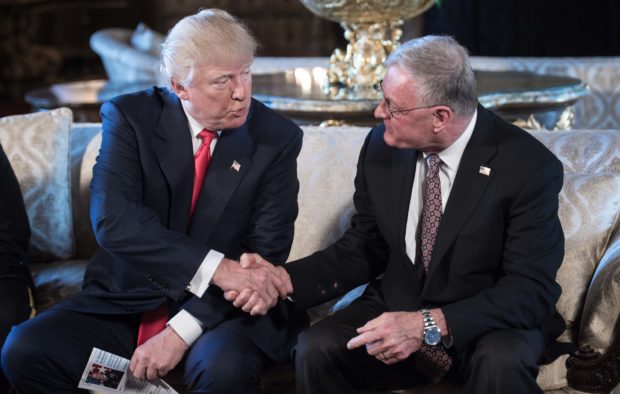 US President Donald Trump shakes hands with Keith Kellogg (R) after announcing him as chief of staff to national security adviser US Army Lieutenant General H.R. McMaster at his Mar-a-Lago resort in Palm Beach, Florida, on February 20, 2017. (NICHOLAS KAMM/AFP/Getty Images)

“I love Keith Kellogg. Keith Kellogg he’s been with me from the beginning. He’s great,” Trump said about Kellogg.

Ambassador Robert O’Brien currently “leads the U.S. government’s diplomatic efforts on overseas hostage-related matters” for the State Department and was the special envoy sent to Sweden after American rapper A$AP Rocky was jailed for an alleged assault.

The president said he thinks O’Brien is “fantastic.”

Lisa E. Gordon-Hagerty is the Under Secretary for Nuclear Security of the U.S. Department of Energy (DOE) and Administrator of the National Nuclear Security Administration. She previously served as the president of a national security consulting firm and was named Fortune Magazine’s Most Powerful Women in 2004, 2005 and 2006

Fred Fleitz, the president and CEO of the Center for Security Policy and a former chief of staff to John Bolton, was previously being considered by Trump to replace Director of National Intelligence Dan Coats. A source told the Daily Caller that the president likes that Fleitz is opposed to a war with Iran.