A 25-year-old man named Kevin Whelly had trouble keeping a straight face as he described obviously farcical allegations involving kinky sex acts between himself and Democratic Massachusetts Sen. Elizabeth Warren as he stood on the front porch of an Arlington, Virginia home on Thursday.

Whelly made the accusations standing next to alleged criminal Jacob Wohl and lobbyist Jack Burkman, who put on the press event. Whelly claims he met Warren on a site called “COWBOYS4ANGELS.”

Wohl has been repeatedly accused of courting individuals to make false accusations against prominent liberal figures such as Pete Buttigieg and Robert Mueller, a pattern that fits with the current accusation against Elizabeth Warren. In both of the previous instances, the people Wohl pressured to make the accusations recanted. The story of the Mueller accuser, an heiress named Carolyne Cass, is detailed at length in a Medium profile.

This Jacob Wohl press conference is genuinely one of the funniest things I’ve watched recently.https://t.co/NwDiakhJCC

Whelly also said that Warren told him that she and her husband are in an open relationship and made clear that he is very sexually active. (Elizabeth Warren Rolls Out A Tax Plan On The Super Wealthy)

“Although I had a fair amount of experience in this business, I was shocked by the intensity, duration, and just sheer violence at what Senator Warren wanted,” Whelly said. 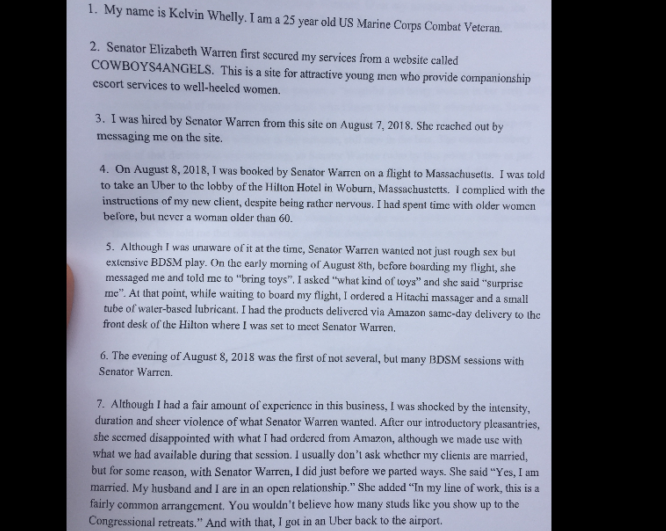 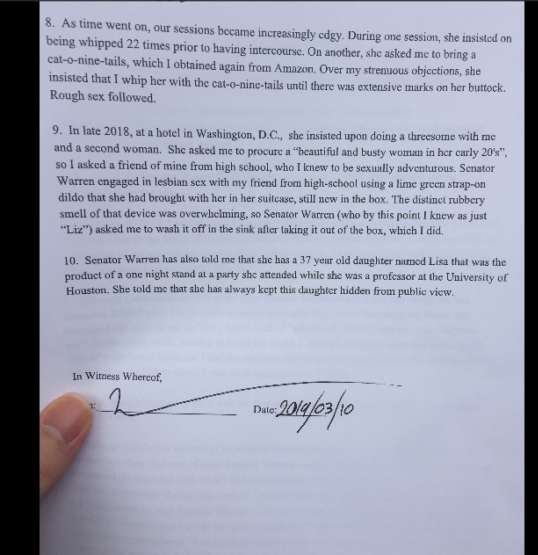 Wohl, Burkman, and Whelly were mocked on social media over the event.

This took her… seconds. https://t.co/GK9ZBzVrAb

Warren herself even joined in on the fun, using the event to push  her core campaign promises of tuition-free college and student loan debt forgiveness.

It’s always a good day to be reminded that I got where I am because a great education was available for $50 a semester at the University of Houston (go Cougars!). We need to cancel student debt and make college free for everyone who wants it. pic.twitter.com/fHasLm0j9P