“Well, turns out it’s happened before,” he said.

“Back in 2000, we can report, President Bill Clinton had a conversation with Tony Blair of the U.K. and asked him directly to intercede in a dispute between British Airways into American carriers [USAIR and American Airlines],” said Carlson, referring to a February 2000 declassified conversation between the two leaders available in the Clinton Presidential Library.

The Fox News host noted that Clinton was “much more direct” than Trump, quoting: “In a political season, it would be big over here to get this open sore resolved. If you could have somebody take a look at it.” 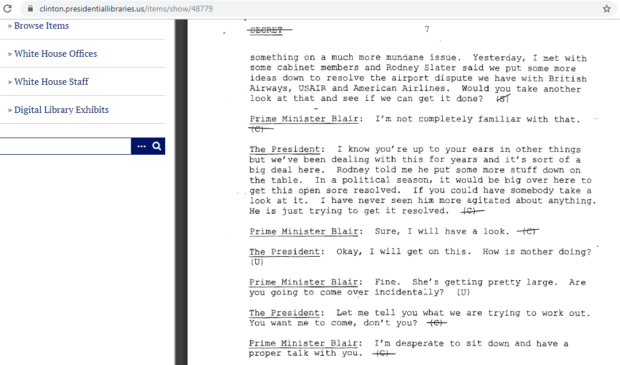 “Is this a big deal?” Carlson asked. “Not really. Is it nakedly political? Is in an effort to use a foreign country to influence the outcome of an election in a presidential year? Well yes, it is. Obviously.” (RELATED: ‘I’m Shocked That You’d Ask Me This’: GOP Rep. Doesn’t Take Bait After Chris Wallace’s Romney Question)

“Whenever they are telling you that something is without precedent, you can be certain that it happens every day here,” he concluded.