U.S. Ambassador to the European Union Gordon Sondland will tell Congress Thursday that President Donald Trump directed him to work with his personal lawyer, Rudy Giuliani, on Ukraine-related issues and that he was “disappointed” by the command.

He will say that Trump told him, Secretary of Energy Rick Perry and former Ukraine envoy Kurt Volker on May 23 that they should consult with Giuliani about corruption issues in the European nation, according to Sondland’s prepared remarks.

The trio had met with Ukrainian President Volodymyr Zelensky on May 20 and were eager to set up a meeting with Trump in hopes of strengthening U.S.-Ukraine ties, according to Sondland, a GOP megadonor who Trump appointed ambassador in 2018.

But Trump was “skeptical” that Zelensky was committed to anti-corruption measures, according to Sondland.

“It was apparent to all of us that the key to changing the President’s mind on Ukraine was Mr. Giuliani,” Sondland said in his prepared remarks.

“Indeed, Secretary Perry, Ambassador Volker, and I were disappointed by our May 23, 2019 White House debriefing,” he added.

“We were also disappointed by the President’s direction that we involve Mr. Giuliani,” Sondland will say. “Our view was that the men and women of the State Department, not the President’s personal lawyer, should take responsibility for all aspects of U.S. foreign policy towards Ukraine.” 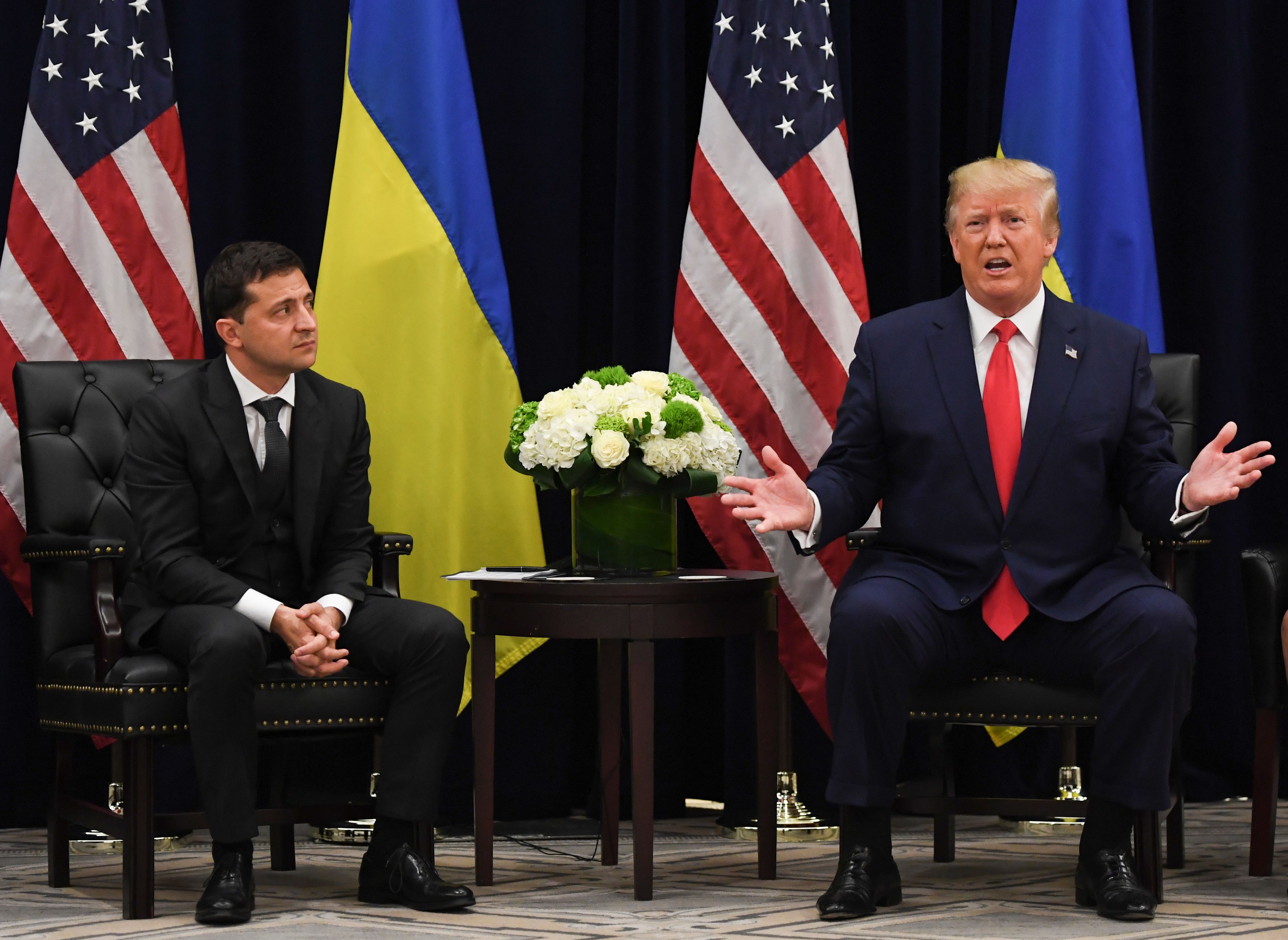 U.S. President Donald Trump speaks as Ukrainian President Volodymyr Zelensky looks on during a meeting in New York on Sept. 25, 2019, on the sidelines of the United Nations General Assembly. (Photo by SAUL LOEB/AFP/Getty Images)

Sondland is the latest in a string of diplomats to testify before three House committees as part of a Democratic-led impeachment inquiry focused on Trump’s actions toward Ukraine.

Several of those diplomats have been heavily critical of Giuliani’s involvement in Ukrainian issues. Michael McKinley, a top aide to Secretary of State Mike Pompeo, reportedly testified Wednesday that he resigned last week because he was “disturbed” that Trump and Giuliani were working with Ukrainians on politically charged investigations. (RELATED: Diplomats’ Texts Show Trump Dangled White House Meeting Over Ukraine’s President)

Giuliani is reportedly under investigation over his Ukraine work. Federal prosecutors indicted two of his associates, Igor Fruman and Lev Parnas, on campaign finance charges. They are accused in an indictment unsealed on Oct. 10 of making so-called “straw” donations to political campaigns in order to influence U.S. policy toward Ukraine.

Sondland said he was aware that a Zelensky meeting with Trump was dependent on the Ukrainian leader committing to opening corruption investigations. But he said he did not know of the Biden angle to Burisma until recently.

“But I did not understand, until much later, that Mr. Giuliani’s agenda might have also included an effort to prompt the Ukrainians to investigate Vice President Biden or his son or to involve Ukrainians, directly or indirectly, in the President’s 2020 reelection campaign,” he said.

“Let me state clearly: Inviting a foreign government to undertake investigations for the purpose of influencing an upcoming U.S. election would be wrong,” Sondland said in the opening statement.

He also defends the decision to work with Giuliani, saying that he, Perry and Volker were “faced with a choice” of abandoning the goal of a Trump-Zelensky meeting or complying with Trump’s directive.

“We chose the latter path, which seemed to all of us – Secretary Perry, Ambassador Volker, and myself – to be the better alternative,” he said.

Sondland also addressed a series of text messages he exchanged with Volker and another diplomat that show their discussions about arranging a Zelesnky-Trump meeting.

The messages indicate that Trump wanted Zelensky to commit to the investigations as a precondition for the meeting. But beginning on Sept. 1, Bill Taylor, who then served as charge d’affaires to Ukraine, first raised concerns that the Trump administration was withholding military aid to Ukraine in exchange for the investigations.

Taylor raised the concern with Sondland again on Sept. 9.

“As I said on the phone, I think it’s crazy to withhold security assistance for help with a political campaign,” Taylor wrote.

Sondland pushed back on Taylor’s assessment in a text message five hours later.

“Bill, I believe you are incorrect about President Trump’s intentions,” he wrote. “The President has been crystal clear no quid pro quo’s [sic] of any kind. The President is trying to evaluate whether Ukraine is truly going to adopt the transparency and reforms that President Zelensky promised during his campaign.”

Sondland said in his testimony that he spoke with Trump by phone after Taylor’s text message and that the president repeatedly denied that a quid pro quo for military aid was on the table.

Sondland did not address comments from GOP Wisconsin Sen. Ron Johnson, who told The Wall Street journal on Oct. 4 that Sondland told him during an Aug. 30 phone call that military aid was dependent on Ukraine opening the investigations.