Former UN Ambassador Nikki Haley took a shot at the deep state during a conservative DC event Tuesday night, warning administration officials that they should not be undermining the president from the inside.

“For those who don’t like the president, they are free to protest him, and many do. But if you serve in the administration, you are not free to push your personal agenda,” Haley said during the American Enterprise Institute (AEI) annual dinner. “What’s at stake is not President Trump’s policies. What’s at stake is the Constitution.”

Haley, who left the Trump administration at the end of 2018, was receiving AEI’s Irving Kristol Award when she slammed her fellow administration officials — particularly the author of the anonymous New York Times op-ed — for ignoring the will of the people. (RELATED: Nikki Haley Resigns As UN Ambassador) 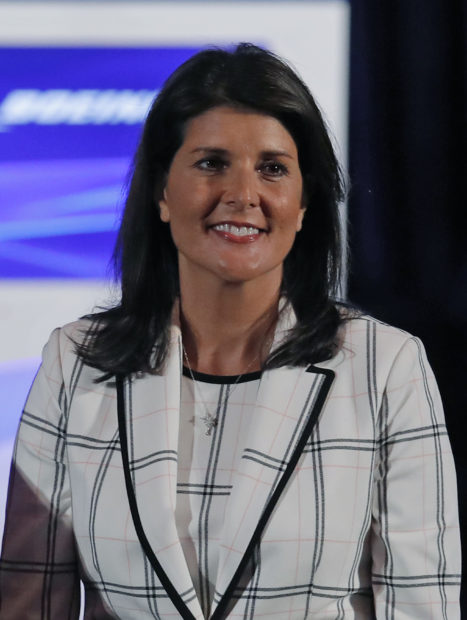 CHICAGO, ILLINOIS – APRIL 29: Former U.S. Ambassador to the United Nations Nikki Haley is introduced at the Boeing annual shareholders meeting at the Field Museum on April 29, 2019 in Chicago, Illinois. Boeing announced earnings fell 21 percent in the first quarter after multiple crashes of the company’s bestselling plane the 737 Max. (Photo by Jim Young-Pool/Getty Images)

“When I was in the administration, I served alongside colleagues who believed that the best thing to do for America was to undermine and obstruct the president. Some wrote about it anonymously in The New York Times. Others just did it,” she said. “They sincerely believed they were doing the right thing. I sincerely believed they weren’t. The president was the choice of the people, in accordance with our founding charter.”

She added that while people may dislike Trump because he is a “disruptor,” that is not an excuse for “undermining the lawful authority that is vested in his office by the Constitution.”

Politicos have long speculated that Haley is gearing up for a presidential run since she left the administration, however Haley has made clear that she will not run in 2020 and will campaign on behalf of Trump.