WASHINGTON — Nearly half the cargo that travels through the busiest port complex in the U.S. is subject to tariffs, which puts about 1.47 million jobs at risk nationally, a study released Tuesday shows.

The study by the Port of Los Angeles and BST Associates looked closely at the impacts of the U.S.-China trade war on all 435 congressional districts and found that tariffs most negatively influence jobs and trade in California, Texas, Illinois, Ohio, Michigan, Arizona, Indiana, Missouri, Colorado, Wisconsin and Minnesota.

When the trade war began in March 2018, Port of LA Executive Director Gene Seroka said during a Tuesday press conference that the cargo port “immediately took interest and commissioned a study” and hypothesized three possible outcomes.

Today, #PortofLA released a new study on the impact of tariffs nationwide: “By The Numbers: Jeopardizing the National Benefits of Trade Through America’s Busiest Port Complex.” https://t.co/dXI48ppSwY pic.twitter.com/4Y2dJoNBuS

“One would be higher prices for consumers. … An additional $31 billion is attached to what you and I spend in the store,” Seroka explained.

“Second, we thought that if these taxations of tariffs could not be passed onto the consumer, companies would have to absorb some of these costs,” he continued, adding that “$2.2 trillion worth of cash is being held by American companies on their balance sheets. The highest amount ever,” meaning money is not being invested due to low consumer confidence.

“Third, we said there would be a migration or change in shifting trade patterns, and to an extent, that has also been very true. … For every container we earn from a newly sourced origin, we’re losing two-and-a-half containers from China,” Seroka continued.

Seroka said exports at the port, which handled nearly $380 billion of trade goods in 2018, have declined steadily over 12 consecutive months as of October. Of those $380 billion of goods that travel through the LA port complex, $182 billion — or 48% — are subject to tariffs, which have tripled since February 2018, according to the study.

While most imports are already assembled, 25% is used for domestic production, which affects even more jobs nationwide, the study noted. (RELATED: Who Is Winning The Trade War — The US Or China?)

About 1.47 million jobs are related to the kinds of cargo impacted by tariffs that move through the LA port complex are at risk of “reduced hours [and] possible layoffs” as a result of higher cost burdens being put on companies in an effort to keep prices as low as possible for consumers, according Port of LA spokesperson Phillip Sanfield.

Seroka explained that while 1.47 million jobs related to cargo affected by tariffs may not directly result in layoffs, “it does lead to underemployment. Very simply put, less cargo means less jobs.”

“America needs to know the impact of tariffs on our economy,” Seroka added. “Some 42 congressional districts in the U.S. — nearly 10% — responsible in nearly 22 states across the country have seen retaliatory tariffs on 90% of their cargo.” 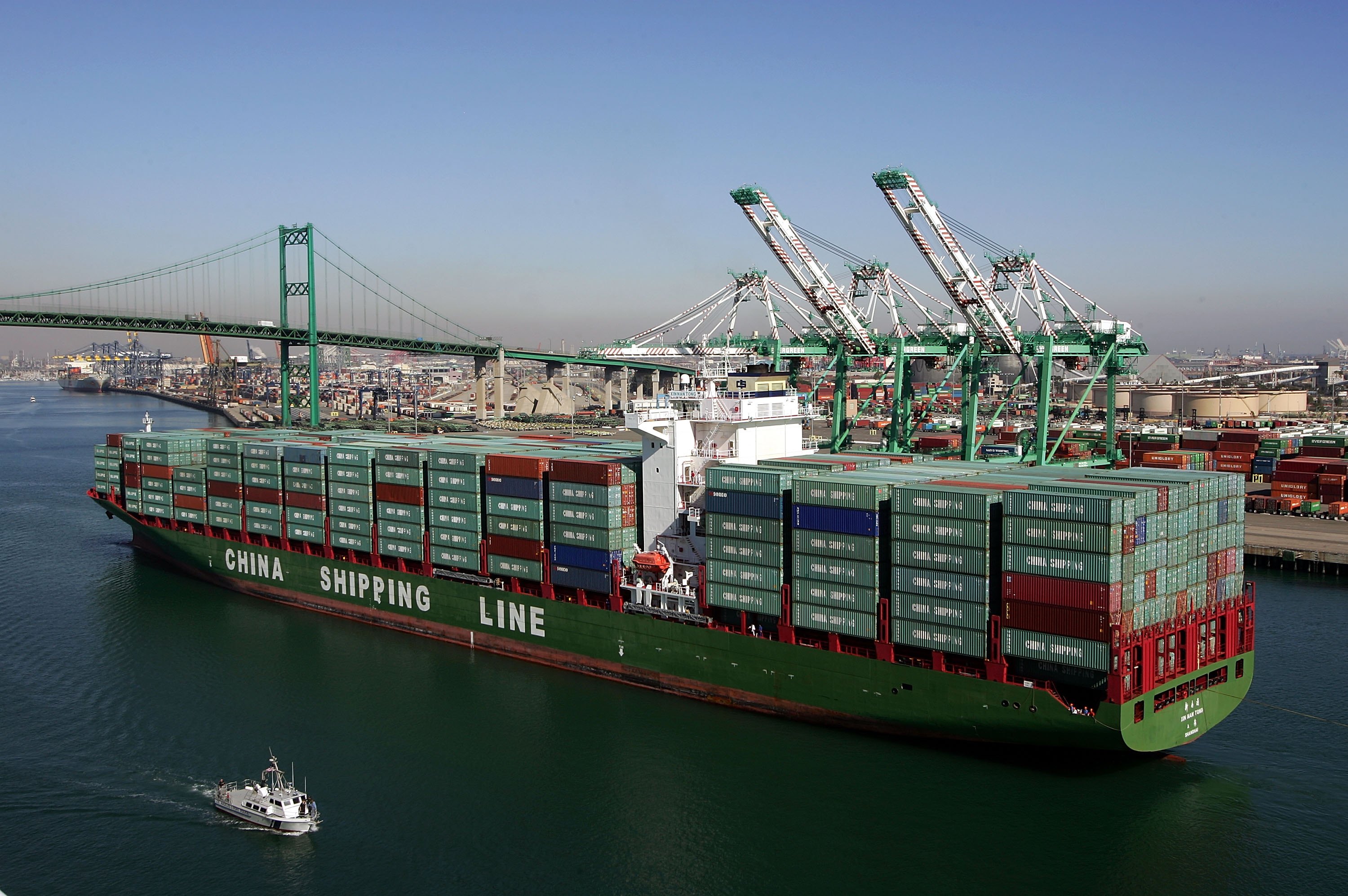 A China Shipping Lines container ship heading toward the Vincent Thomas Bridge can be seen from the Queen Mary 2 Commodore Warwick cruise ship during the ship’s maiden call to the Port of Los Angeles, Feb. 22, 2006. (Photo by David McNew/Getty Images)

Tariffs President Donald Trump implemented against China have cost Americans an additional $38 billion since February 2018, according to data anti-tariff campaign Tariffs Hurt the Heartland and consulting firm The Trade Partnership released on Nov. 6.

Americans paid a total in September of $7.1 billion on all tariffs and $4.1 billion on tariffs the Trump administration implemented, the groups found.

“This tariff war has been going on for quite some time, and agriculture has been at the epicenter of the tariff war in terms of the retaliatory tariffs. Keep in mind, at the beginning of this war, agriculture had a net trade surplus of nearly $20 billion and opening new and major markets like China,” Angela Hofmann, co-executive director of Farmers for Free Trade, a nonprofit organization against tariffs, said during the conference Tuesday.

Hofmann concluded, however, by saying farmers are “very optimistic” that the first phase of a potential trade deal with China that Trump touted, saying farmers “should buy more land,” is in the making at a time when American farmers are facing other agricultural competitors like Brazil.

Chinese Commerce Ministry spokesman Gao Feng also expressed optimism with the potential deal on Nov. 7, saying during a press briefing, “If the phase-one deal is signed, China and the U.S. should remove the same proportion of tariffs simultaneously based on the content of the deal. This is what [both sides] agreed on following careful and constructive negotiations over the past two weeks,” The Wall Street Journal reported.