Some 30 states require attorneys to join a bar association and pay membership fees as a condition of practicing law. Two lawyers have asked the Supreme Court to declare that practice, called the “integrated bar,” unconstitutional on First Amendment grounds.

The lawyers, Adam Jarchow and Michael Dean, are members of the state bar of Wisconsin. They object to positions the bar has taken on a number of subjects, including felon voting rights, the death penalty, and criminal-justice issues.

“It should go without saying that Wisconsin attorneys do not all share the same vision for the law and the administration of justice and so may disagree with the State Bar’s positions on any number of important public policies, as the Petitioners do,” their petition reads. “Nonetheless, they are all compelled by State law to subsidize its advocacy in support of those positions and other speech by the Bar with which they disagree.”

Though the Supreme Court expressly sanctioned the integrated bar in past decisions, Jarchow and Dean say the model is untenable following the court’s 2018 decision in Janus v. AFSCME. In Janus, a five-justice majority said public-sector unions cannot force government workers to pay mandatory “agency fees” to cover the cost of collective bargaining.

“The compelled-dues aspect of Wisconsin’s integrated-bar scheme is identical to that of the agency-fee scheme invalidated in Janus,” the Jarchow petition reads.

In a 1990 case called Keller, the Supreme Court turned away a First Amendment challenge to integrated bar schemes. Keller derived in large part from a 1977 decision called Abood, a precedent authorizing mandatory union fees which the justices overturned in Janus.

Keller relied on Abood in large part, finding there was “a substantial analogy” between the bar, a labor union, and their respective members. By this line of thinking, government unions could collect mandatory fees because all workers — members and non-members alike — benefitted from its work in collective bargaining negotiations. Lawyers similarly benefit from the work of the bar, which enforces a code of conduct, disciplines members, and makes recommendations for admission to practice.

“It is entirely appropriate that all of the lawyers who derive benefit from the unique status of being among those admitted to practice before the courts should be called upon to pay a fair share of the cost of the professional involvement in this effort,” the Keller decision reads.

Keller also provides that compulsory bar fees cannot be used to support ideological activity. To that end, the Wisconsin bar allows members to pay a pro-rata share for activities that can’t be supported with mandatory fees.

Since Abood is no longer good law, the plaintiffs argue that Keller has lost its primary justification and should itself be overturned. Its continued viability is “a striking anomaly” in First Amendment jurisprudence, Jarchow says. 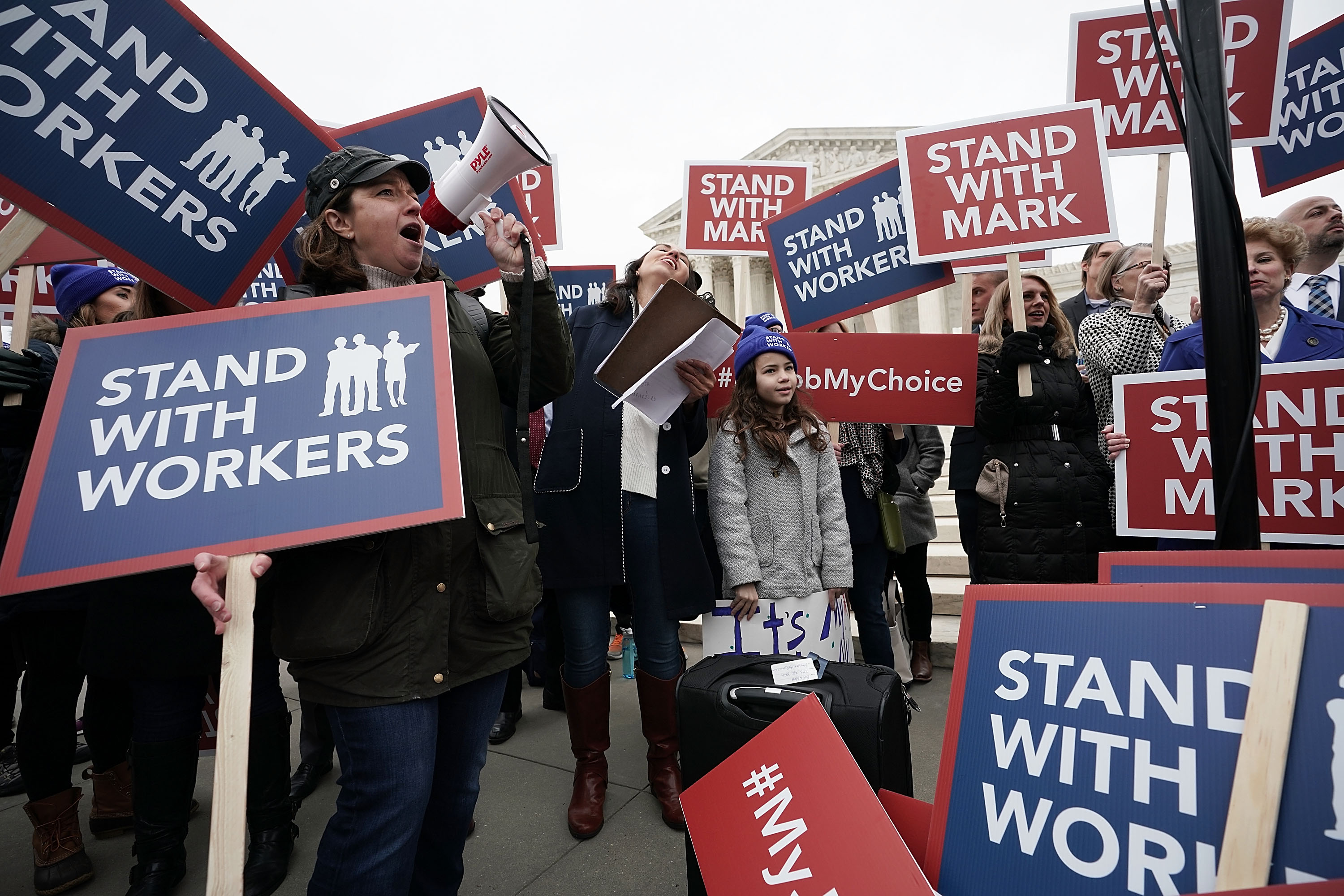 Activists rally in front of the Supreme Court before arguments in Janus v. AFSCME on February 26, 2018. (Alex Wong/Getty Images)

What’s more, Jarchow argues integrated bars pose a greater constitutional problem than mandatory union fees. That’s because lawyers are required to enroll in the bar itself, in addition to making financial contributions.

“Wisconsin’s integrated-bar arrangement imposes a greater burden on First Amendment rights than the agency-fee arrangement Janus condemned because it requires lawyers to be formal members of the State Bar, whereas the public-sector workers in Janus were not compelled to join the union,” the petition reads.

The case has moved through the federal courts with remarkable speed. The plaintiffs acknowledge that Keller remains controlling precedent that the Supreme Court alone can overturn, making litigation in the lower courts a pro forma exercise. A federal trial judge dismissed their lawsuit in light of Keller on Dec. 11.

The plaintiffs then asked the 7th Circuit to affirm that decision without briefing or argument. The appeals court granted that request on Dec. 23, opening the way to the Supreme Court. The plaintiffs filed their petition shortly thereafter on Dec. 31. The state bar’s response to Jarchow’s petition is due Feb. 3. If the justices take the case, arguments will likely follow in the autumn.

Another follow-on Janus dispute asks whether public employees are entitled to recoup mandatory fees they paid into union groups in the past.

The Wisconsin bar collected approximately $5 million in membership dues for fiscal year 2019, according to the plaintiffs. Lawyers who fail to pay dues may be suspended from practice. The case is No. 19-831 Jarchow v. State Bar of Wisconsin.