Republican Texas Gov. Greg Abbott announced Friday that his state will not accept refugees in a letter obtained by the Daily Caller.

The Trump administration has given states the option to opt out of a refugee resettlement program, but Texas is the first state to announce they will not participate in the program. 18 Republican governors have already opted into the program. (RELATED: The Four Ways Washington Can Fix America’s Immigration Crisis)

The governor praised his state’s history of accepting refugees, but said that he does not feel Texas should participate in the program, citing the current immigration crisis. (RELATED: Dick Durbin Stalls Landmark Immigration Bill, But Won’t Explain Why. Critics Say Its To Keep Republicans From Getting A Win) 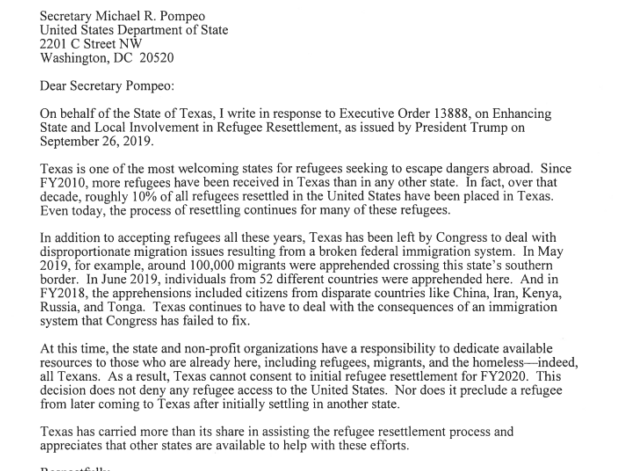 “Texas is one of the most welcoming states for refugees seeking to escape dangers abroad,” Abbott  wrote in a letter to Secretary of State Mike Pompeo. “In addition to accepting refugees all these years, Texas has been left by Congress to deal with disproportionate migration issues resulting from a broken federal immigration system.”

“At this time, the state and non-profit organizations have a responsibility to dedicate available resources to those who are already here, including refugees, migrants, and the homeless,” Abbott wrote. “As a result, Texas cannot consent to initial refugee resettlement for FY2020. This decision does not deny any refugee access to the United States. Nor does it preclude a refugee from later coming to Texas after initially settling in another state.”