An environmental activist associated with the Sunrise Movement harangued former Colorado Gov. John Hickenlooper for suing a Colorado town in 2013 that voted to ban hydraulic fracturing.

“Gov. Hickenlooper thinks he can get away with suing his own constituents AND still get enough support to run for congress,” the Sunrise Movement noted in a Monday tweet. The organization, a youth-led group that promoted the Green New Deal in 2019, criticized the Democrat for supposedly “helping big oil execs.”

The Sunrise Movement tweeted a video of a man confronting Hickenlooper, who took part in a lawsuit in 2013 targeting Longmont, Colorado’s citywide ban on a gas drilling technology. The group has since removed the tweet. (RELATED: Hickenlooper: ‘Socialism Is Not The Solution’ To Climate Change) 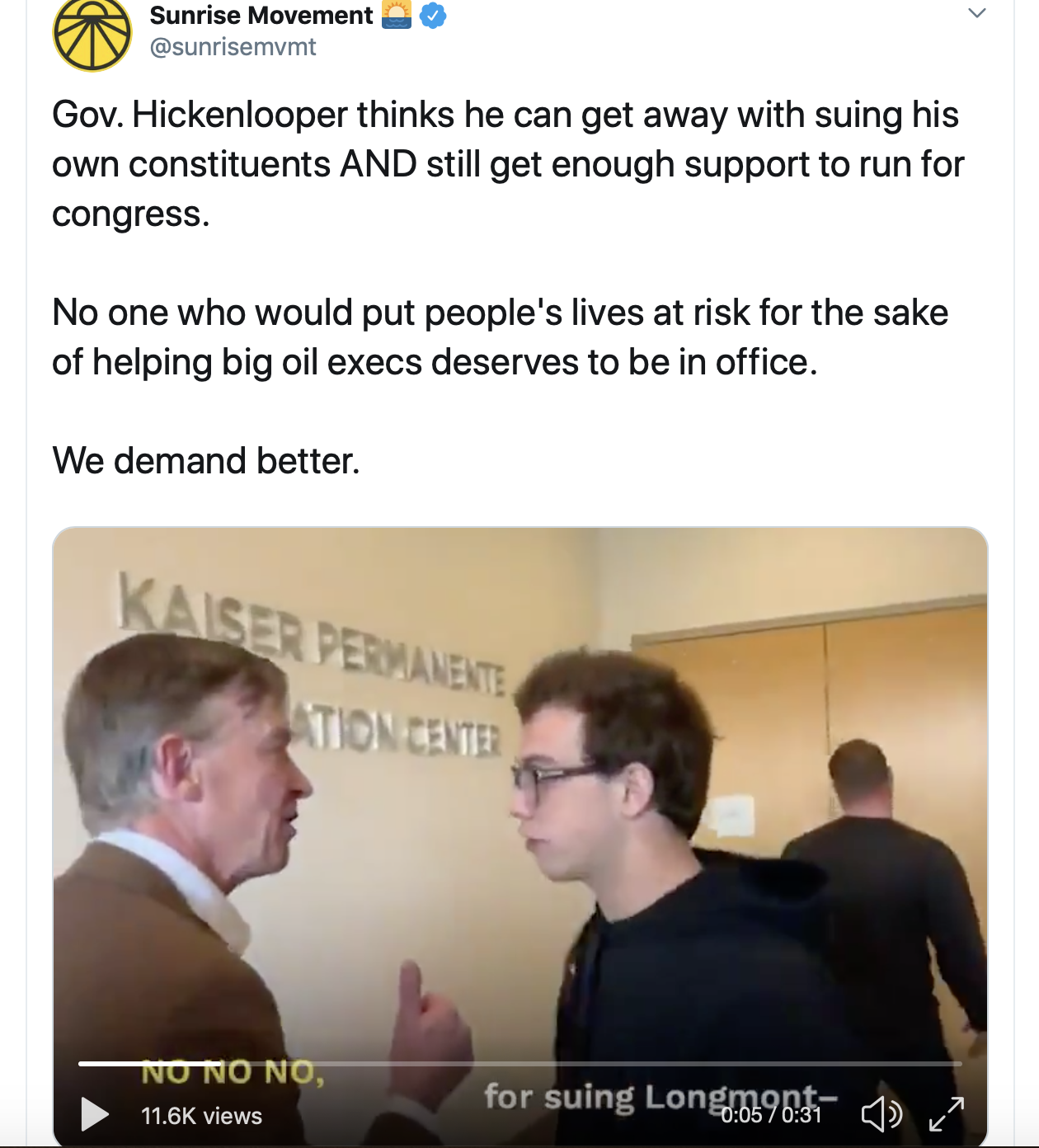 A screenshot of a tweet shows a confrontation between former Gov. Hickenlooper and an anti-oil activist. (Screenshot/Twitter)

“How can we trust you to fight for the people in the climate crisis when you continually support oil and gas executives?” the man in the video said. Hickenlooper tried to deescalate the situation and pleaded with the activist to be quiet so he could respond to the questions.

Hickenlooper, a Democrat campaigning for a U.S. Senate seat in 2020, asked the Colorado Oil & Gas Conservation Commission to drop the lawsuit against Longmont, which had voted to ban the natural gas extraction technique. Colorado sued after the city voted in 2012 to ban fracking.

The former Colorado governor worked out a deal in 2014 to persuade fracking opponents to withdraw two anti-fracking ballot measures in exchange for a dismissal of the lawsuit. Environmentalists have worked for years to nix the widespread use of fracking in the state.

Colorado residents voted in November 2018 to block a measure that would have effectively banned fracking in large chunks of the state. Proposition 112 would have banned new fracking wells within 2,500 feet of homes, businesses, protected areas such as playgrounds and historic sites and other “vulnerable areas.”

Neither Hickenlooper nor Sunrise Movement have responded to the Daily Caller News Foundation’s requests for comment.