The story of last week’s gun rights rally in Virginia was one of narrowly-avoided disaster, according to several mainstream outlets, with law enforcement stepping in just in the nick of time to prevent a mass shooting.

The FBI’s own court filings tell an entirely different story though, one in which white extremists stumbled from one surveillance trap to another without much situational awareness.

The New York Times, the Associated Press, and BuzzFeed narrative centered around the arrest of three men: William Bilbrough, Brian Lemley, and Canadian national Patrik Mathews–all members of the The Base, a white supremacist organization that interacts mostly online and aims to create a white ethno-state. The media implied the group was arrested while planning an attack at the Virginia rally, but that is not what law enforcement documents show.

Firstly, the group decided not to actually go to a rally. They also decided not to start any violence. They planned to wait for a race war to start, as voice recordings show, and then join in.

This is the plan The Base’s cell actually came up with for Richmond.

They decided not to go to the rally, but camp out, & wait for the expected civil war to start.

They weren’t busted on their way to a terrorist attack.

They were busted on their way to a camping trip. pic.twitter.com/uuyuhu32rO

Records show that police were long in position to prevent these men from successfully attacking anyone. The FBI had been tracking their movements since September 2019 and installed video and audio recording devices inside their Delaware residence in December 2019, according to the FBI’s motion to detain the three men. (RELATED: #BlackGunsMatter Activist Slams Media For VA Rally Coverage – ‘They Have An Interest In Chaos’)

Here is Lemley’s plan, as spoken to Mathews from the motion:

“So this, so like, this plan of mine. It was like, this is like an adderall idea… it really didn’t click until I took an adderall, and then I was like ‘Oh shit, I gotta plan.’ Uh, so this is what I’m thinking… instead of going to Richmond, why don’t we like, take a look at a map and we’ll find like a gun range that’s in like one of the outer counties and a campground, and we’ll spend the weekend training and camping, while we uh, pay close attention to the news and live-streams and uh, that way, if it’s go-time, you know we’re already in position and we can then link up with our whatever [national socialist] forces happen to be in the area.”

While the Base members did talk in vague terms about attacking the demonstration, they ultimately decided to hide out with firearms and provisions at a campsite in Maryland in anticipation of a race war they were convinced would ignite at the rally without their help.

Mathews and Lemly traveled to and from a Maryland gun range where they intended to camp out during the rally before returning to their Delaware residence and being arrested.

“Early in the morning on January 16, 2020, federal agents executed federal arrest warrants on Lemley and Mathews at the Delaware residence. Before Lemley and Mathews submitted to the agents, however, they both smashed their cell phones and dumped them into the toilet. Their activity was fully captured on the video and audio surveillance installed in the Delaware residence,” the motion reads. 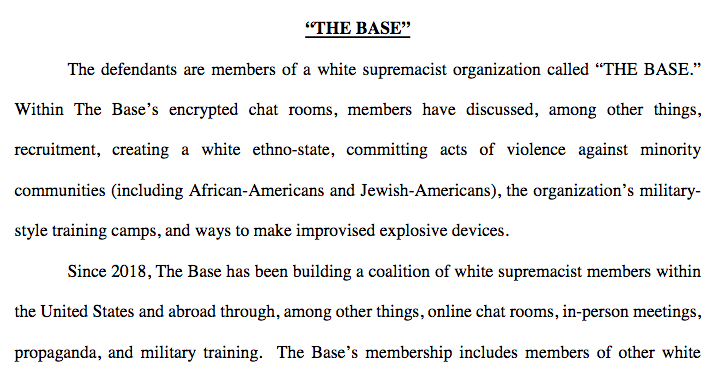 The FBI describes “The Base” in its motion for detention. (Screenshot/FBI)

Both Democratic elected officials and news outlets compared the pro-2nd Amendment rally to the 2017 white nationalist rally in Charlottesville, hinging the comparison on news breaking that law enforcement had nabbed these Base members. One Vox reporter claimed they “planned to kill gun rights advocates and police in Richmond in order to foment a race war.”

That statement is simply not borne out in the FBI’s own filings.

Democratic Gov. Ralph Northam joined in, painting the event in a sinister light.

“They are not coming to peacefully protest,” he said of rally-goers at a news conference. “They’re coming to intimidate and cause harm.”

When the event occurred, however, journalists on the ground with the 22,000 demonstrators reported it was peaceful. It included “hundreds” of armed minorities and just one person was arrested for wearing a mask. (RELATED: Wayne Dupree Weighs In On The Media’s Dangerous Coverage Of Richmond 2A Rally)

Talia Lavin at GQ claimed “Bloodshed—great and heavy and perhaps unprecedented on American soil—was narrowly averted,” with their arrests.

The documents Lavin, NYT, Vox, and AP referenced paint a picture not of determined and capable white supremacists being narrowly thwarted by law enforcement, but of racist incompetents meandering into the arms of the FBI.