Former first lady Michelle Obama said in a new documentary that she has “trauma” from people not showing up to vote for Democrats.

“I understand the people who voted for Trump,” she said in the new documentary “Becoming.”

“The people who didn’t vote at all, the young people, the women, that’s when you think, man, people think this is a game,” Obama said, continuing, “It wasn’t just in this election. Every midterm. Every time Barack didn’t get the Congress he needed, that was because our folks didn’t show up.”

“After all that work, they just couldn’t be bothered to vote at all. That’s my trauma.”

The former first lady also said that sitting on the stage during Trump’s inauguration in 2017 was “painful” and “almost like a slap in the face.” 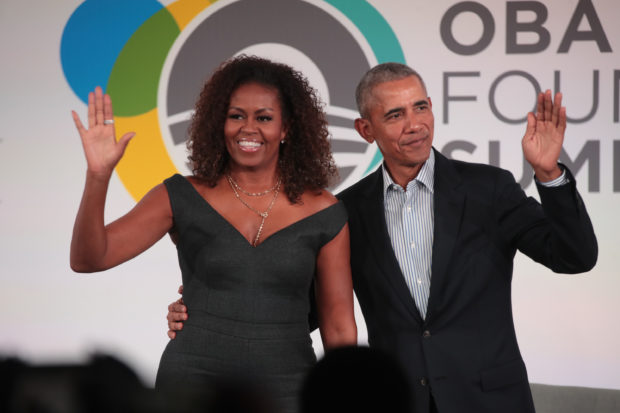 Former U.S. President Barack Obama and his wife Michelle close the Obama Foundation Summit together on the campus of the Illinois Institute of Technology on October 29, 2019 in Chicago, Illinois. The Summit is an annual event hosted by the Obama Foundation. Photo by Scott Olson/Getty Images

Obama has criticized Trump since leaving the White House, writing in 2018 that she can “never forgive” Trump for his statements about her husband.

“The whole [birther] thing was crazy and mean-spirited, of course, its underlying bigotry and xenophobia hardly concealed. But it was also dangerous, deliberately meant to stir up the wingnuts and kooks,” she wrote.

“What if someone with an unstable mind loaded a gun and drove to Washington? What if that person went looking for our girls? Donald Trump, with his loud and reckless innuendos, was putting my family’s safety at risk. And for this I’d never forgive him.” (RELATED: Michelle Obama: America Chose ‘Misogynist’ Trump Over ‘Exceptionally Qualified’ Clinton)