A 22-year-old woman was arrested in Grand Rapids, Michigan on Tuesday for allegedly encouraging protestors to loot and act violently, which she captured on a Facebook Live video, MLive reported.

Streamed over the weekend, the video shows Alexandra Lyons drinking beer allegedly stolen from a local bar, according to court records. An additional video streamed from her home shows allegedly stolen clothes. Both videos prompted people to call the Grand Rapids police and affirmed Lyons’ role in riots that took place in the city, according to Grand Rapids police Detective Matt Dejong.

Lyons was arrested on charges of inciting a riot and malicious destruction of property, both of which are felonies that carry sentences of 10 and five years in prison, respectively, if convicted. She is far from the first person to be accused of these crimes in recent days.

The first video allegedly shows Lyons alongside large crowds of protesters, and she is heard encouraging people to “throw bricks or other objects at windows of multiple businesses downtown,” according to the arrest affidavit. (RELATED: Here Are The Cities Handling The George Floyd Protests And Riots The Best)

The second video streamed from her home shows what looks like a party at Lyons’ home, and displays clothing that was allegedly stolen from F. David Barney Clothiers, a clothing store in Grand Rapids. The local business is of many around the country have been looted.

Lyons was arraigned in the Grand Rapids District Court Tuesday and her bond was set at $40,000. 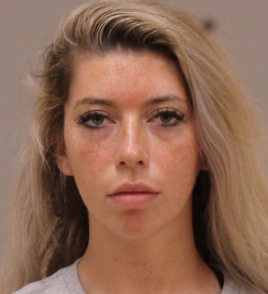 Tensions have remained high in Grand Rapids for several days as large crowds have gathered to protest the death of George Floyd, who died May 25 after a Minneapolis police officer knelt on his neck for over eight minutes, video of the incident showed.

To help combat violence and looting throughout the city, Grand Rapids Mayor Rosalynn Bliss had established a 7 p.m. curfew that was in place until Tuesday night.