President Donald Trump praised a letter written to him by Archbishop Carlo Maria Vigano, the Holy See’s former ambassador to Washington, warning of an “orchestrated media narrative” which seeks to “legitimize violence and crime” rather than fight racism and bring about justice.

As riots and protests raged throughout the United States, Vigano wrote a June 7 letter published in LifeSiteNews to the president warning of an eternal struggle between good and evil.

“In society, Mr. President, these two opposing realities co-exist as eternal enemies, just as God and Satan are eternal enemies. And it appears that the children of darkness – whom we may easily identify with the deep state which you wisely oppose and which is fiercely waging war against you in these days – have decided to show their cards, so to speak, by now revealing their plans,” Vigano wrote.

The rioting comes after the death of George Floyd, a black man who died after a Minneapolis police officer knelt on his neck for several minutes, video of the incident showed. Derek Chauvin, the officer, has been fired and arrested on second-degree murder and manslaughter charges.

Vigano said the attacks and criticism the president received after visiting the National Shrine of St. John Paul II are “part of the orchestrated media narrative which seeks not to fight racism and bring social order, but to aggravate dispositions; not to bring justice, but to legitimize violence and crime; not to serve the truth, but to favor one political faction.” 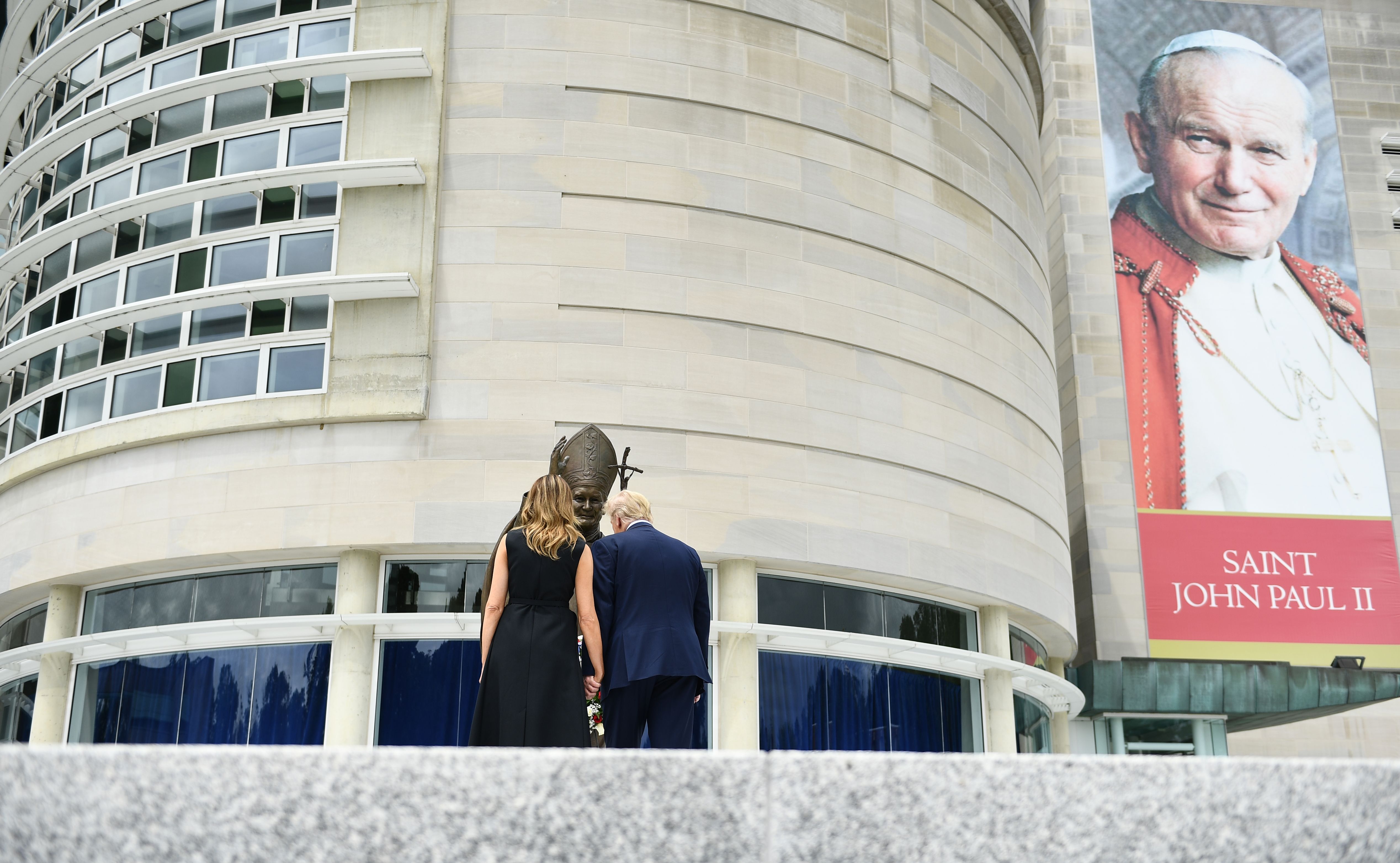 US President Donald Trump and First Lady Melania Trump visit the Saint John Paul II National Shrine, to lay a ceremonial wreath and observe a moment of remembrance under the Statue of Saint John Paul II on June 2, 2020 in Washington,DC. (Photo by Brendan Smialowski / AFP) (Photo by BRENDAN SMIALOWSKI/AFP via Getty Images)

“For the first time, the United States has in you a President who courageously defends the right to life, who is not ashamed to denounce the persecution of Christians throughout the world, who speaks of Jesus Christ and the right of citizens to freedom of worship,” Vigano told Trump. (RELATED: DC Archbishop Rips Saint John Paul II National Shrine For Allowing Itself To Be ‘Manipulated’ Ahead Of Trump Visit)

Trump’s participation in the March for Life and his proclamation of April as National Child Abuse Prevention Month confirm that “both of us are on the same side in this battle,” Vigano said. 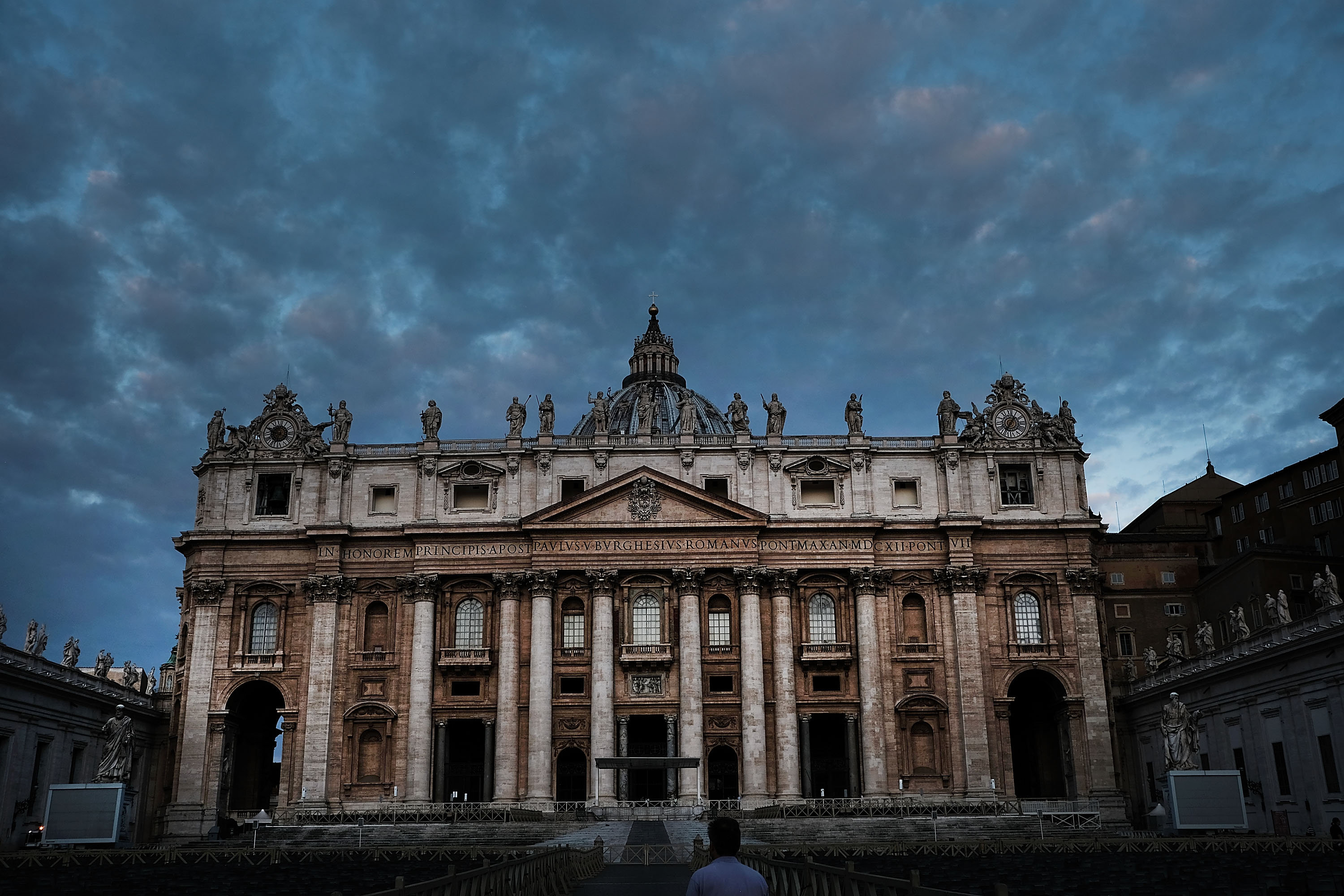 “It is quite clear that the use of street protests is instrumental to the purposes of those who would like to see someone elected in the upcoming presidential elections who embodies the goals of the deep state and who expresses those goals faithfully and with conviction,” Vigano said. (RELATED: Bernie Sanders Adviser Compares Antifa To D-Day Soldiers)

“It will not be surprising if, in a few months, we learn once again that hidden behind these acts of vandalism and violence there are those who hope to profit from the dissolution of the social order so as to build a world without freedom: Solve et Coagula, as the Masonic adage teaches,” Vigano adds.

Vigano also emphasized to Trump that he constantly prays for the “beloved American nation” and for Trump and his allies. Trump thanked the Holy See’s former ambassador to Washington for the letter in a Wednesday evening tweet. (RELATED: Vigano Says He Received Complaints A High-Ranking Monsignor Molested Catholic University Students)

“So honored by Archbishop Viganò’s incredible letter to me,” the president said. “I hope everyone, religious or not, reads it!”

So honored by Archbishop Viganò’s incredible letter to me. I hope everyone, religious or not, reads it! https://t.co/fVhkCz89g5

Trump’s praise of Vigano’s letter comes after Pope Francis expressed support for a bishop who had knelt in prayer during a Black Lives Matter protest. “We cannot close our eyes to any form of racism or exclusion, while pretending to defend the sacredness of every human life,” Francis said.

The Associated Press reported that the pope’s statement indicates “a clear effort to call out some conservative Catholics for whom the abortion issue is paramount, while other ‘life’ issues dear to Francis — racism, immigration, the death penalty and poverty — play second fiddle at the ballot box.”

Trump has received criticism from other Catholic leaders, including Washington Archbishop Wilton Gregory, who accused Trump of using tear gas to scatter protesters “for a photo opportunity in front of a place of worship and peace.”

Vigano has previously said that he personally informed Francis in 2013 of disgraced and defrocked Cardinal Theodore McCarrick’s alleged sexual misconduct, and accused Francis of lying about the knowing the information and covering up the allegations. (RELATED: Disgraced Cardinal McCarrick Blames Conservatives For The Dozens Of ‘Credible’ Accusations Of Sexual Assault Against Him)

“I will not say a single word about this,” Francis told reporters who asked about the Vigano’s accusation in August 2018. “I believe the statement speaks for itself. And you have the sufficient journalistic ability to make your conclusions. It’s an act of trust.”

He also said in May 2019: “I didn’t know anything … nothing, nothing,” regarding McCarrick’s misconduct.

“What the pope said about not knowing anything is a lie. […] He pretends not to remember what I told him about McCarrick, and he pretends that it wasn’t him who asked me about McCarrick in the first place,” Vigano said in a May 2019 interview with LifeSite News following the pope’s comments.