She broke a kneecap hiking the highest mountain in Africa and competed in an Ironman triathlon with blood dripping down her face after sustaining an injury. So with her poll numbers being weak, even in historically Republican districts, we can still expect Republican Arizona Sen. Martha McSally will not be dissuaded easily.

President Donald Trump has reportedly told his advisers that he is concerned about her chances in the Nov. 3 special election. Yet she told the Daily Caller she’s giving it all she’s got.

In “Dare to Fly,” McSally recounts her raw experiences such as overcoming rape, sexual assault, sexual harassment, and the loss of family and friends. She hopes the book can teach people how to convert struggles into progress. She calls this system a “misery database.”

“We all have that database of difficult things we have been through,” McSally told the Caller. “Sometimes people tap into it in order to hold themselves back. They dwell on the misery, they can’t sleep at night, it stops moving them forward. I created the term [misery database] and I talk about it in a way that strengthens you, to propel you to be able to push through hard things and do amazing things because you’ve been through hard things before.”

McSally faced setbacks on her path to becoming a fighter pilot from the very beginning of her military career. Her arm was severely injured. She was too short to be a pilot. She was dreaming of a position that didn’t even exist yet for women in the military. 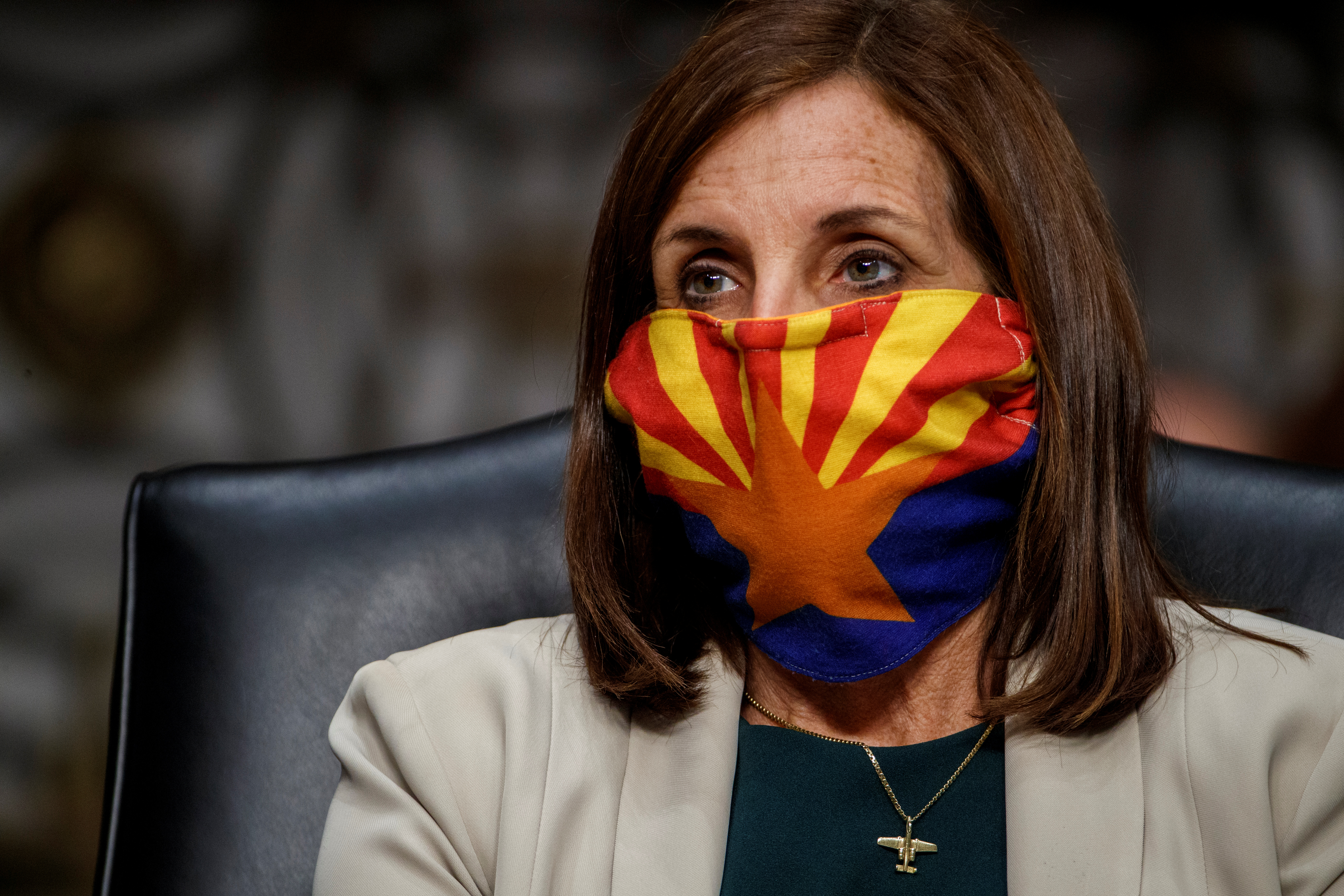 Senator Martha McSally (R-AZ) testifies during the Senate Armed Services Committee hearing on the Department of Defense Spectrum Policy and the Impact of the Federal Communications Commission’s Ligado Decision on National Security during the coronavirus disease (COVID-19) pandemic on Capitol Hill in Washington, U.S. May 6, 2020. (Photo: Shawn Thew/Pool via REUTERS)

Tragically, McSally faced tremendous hardship as a child. She said the death of her father Bernard McSally nearly broke her.

“Losing my dad at 12, and being very angry at God — the only way a 12-year-old can process it,” said McSally, “[then] being abused by my coach — robbing … me of my innocence while I was a hurting, vulnerable, fatherless kid. I have been to the depths of despair.”

Bernard told her on his deathbed: “Make me proud.”

McSally promised that she would. That moment, she says, is what drives her. She said she was later “able to find the peace of God and the hope of God to help me someday to get out of bed in the morning.”

“In the darkest and most difficult times in my life, I often found my last ounce of strength to persevere while thinking about my dad and his request,” she writes in “Dare to Fly.”

She said she endured vicious harassment in the military due to her gender. She told the Caller that the “denigration” she put up with as a young female officer have helped her deal with the barrage of media attacks which she now faces regularly.

“As awful as those experiences I had as a woman in the military, it actually really helped me to be able to focus on serving, not getting distracted by the [media] attacks,” McSally said. “They’re unfair, they’re inflammatory. But life’s unfair, and ‘you know you’re over the target when you’re getting flak,’ as we say as fighter pilots. So you know they’re attacking me for a reason, and I gotta stay on my mission. I gotta keep serving and keep fighting and do the best that I can.”

Her father has influenced her life work in other ways. She said her father never dreamt of being a “big guy,” but only wanted to make a positive impact. She said he just wanted people to know “he was there.”

McSally has a long list of personal accomplishments, but she answered the phone for her interview with the Caller saying simply, “Hey, it’s Martha McSally.” She didn’t use her title. She doesn’t mention the Ivy League school she attended in “Dare to Fly,” nor did she mention it during the interview.

McSally said her father Bernard often gave to charity anonymously. McSally herself donated her salary in April because she knew others had lost their income during the coronavirus pandemic. (RELATED: ‘Never Trusted A Communist’: Sen. McSally Calls For World Health Organization Director To Resign)

“If today is my last day, my prayer and my hope would be that there are people on this planet who say, ‘Martha made a difference in my life,'” McSally said. “That someone would say that I was here and I impacted them in a positive way that made a positive difference for them. Now, whether that’s the neighbor down the street that I’m just helping through a difficult time or … legislation that I’m fighting for in the larger sense or supporting or fighting for my constituents.” 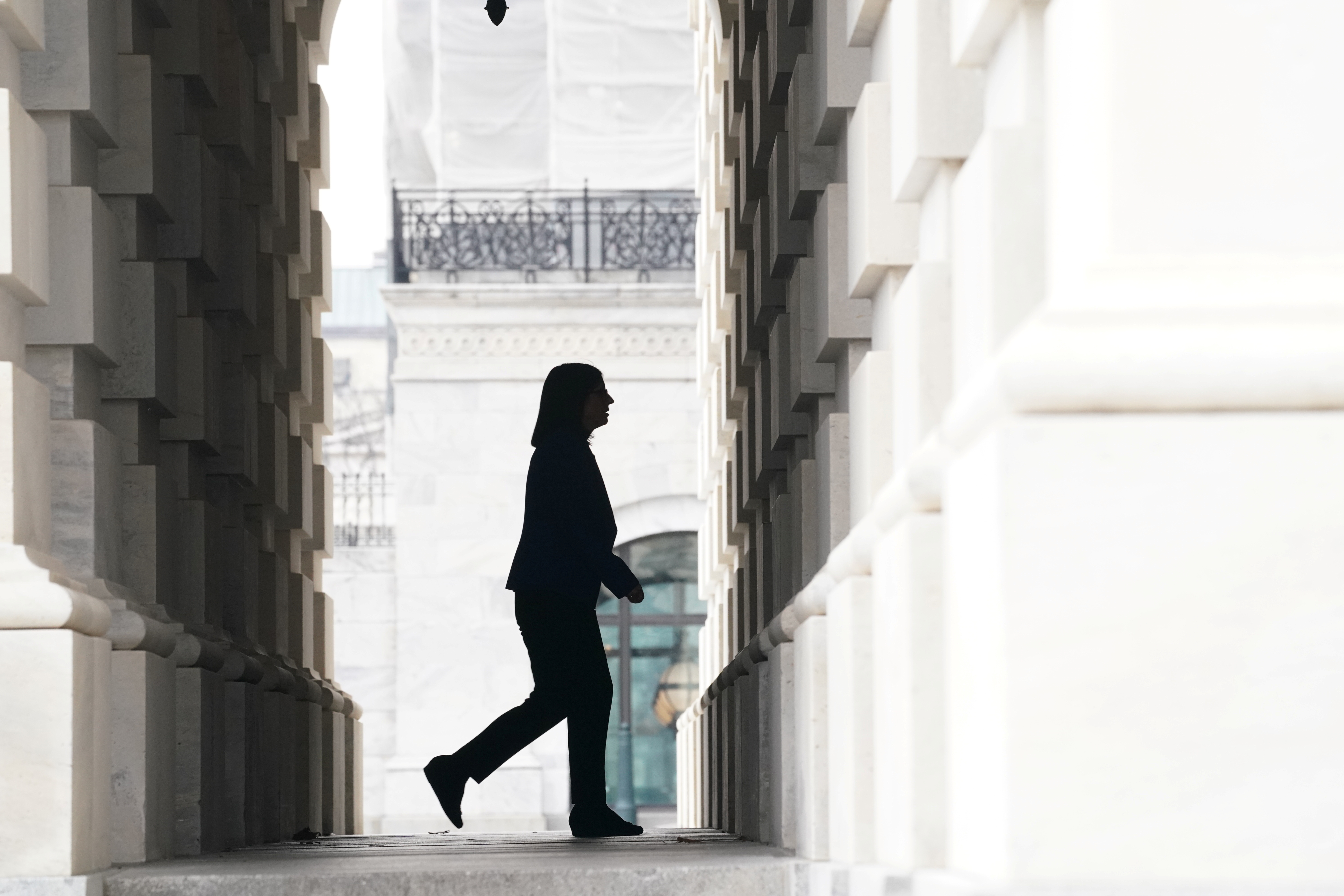 McSally said she is committed to making a difference where she can and connected that desire to her desire to take office.

“If I am in a position to do something, why would I pass it by if I could make a difference for others?” (RELATED: Sen. Martha McSally Donates April Salary To Fight Coronavirus, Pauses Fundraising)

McSally once encountered a photo of an American woman serving in Saudi Arabia who was forced to wear full Muslim garb, a garment known as the abaya.

“When I walked by that picture of that American enlisted woman wearing the black gown and headscarf — it just gripped me,” McSally said. “I could’ve just walked by it and said, ‘This is not my problem,’ but instead I took a look into it.”

McSally told the Caller she fought for eight years and eventually sued the secretary of defense. She eventually got the law passed on her own, as a citizen. Her decision to do so was professionally fraught.

At the time she raised the issue, McSally was on the cusp of becoming a fighter pilot. She knew drawing attention to herself was likely to injure her career.

“You gotta look at that moment in time for me,” McSally said. “I’m just trying to show that I can fly the jet, I can shoot the gun, be one of the guys. The last thing I ever wanted to be was to raise some ‘Excuse me, this is how women are being mistreated.'”

McSally said the story of Esther inspired her to take action — specifically, a line that read, “can it be that you were put in this position for such a time as this.”

“Could it be that I was given this opportunity to become a fighter pilot not just to achieve my dreams, but to be in a position to be the voice for these women who don’t have a voice?” McSally asked. “So I felt propelled, but I was really nervous. I mean, I just knew it wasn’t going to go over well. I knew there was going to be a lot of people that were going to be upset.”

In the upcoming special election, it remains to be seen how McSally will wrestle with the current disparity at the polls. McSally described politics as one of the most frustrating things she has taken on so far.

“I can’t stand the politics, actually. But I have to put up with the politics in order to serve and make a difference,” she said. “My hope is that the people of Arizona can see my heart.”