New York’s 2019 overhaul of bail laws allowed those accused of everything from child sex trafficking to financially supporting terrorism to walk the streets without posting bail — a year later they changed the rules, but not without releasing a slew of accused men.

The Empire state under the direction of Democratic Gov. Andrew Cuomo approved sweeping bail reforms across the state in April 2019. These rules, which took effect in January, forbade judges from imposing bail on anyone not arrested for a violent felony — a broad list of over 90% of criminals walked out of a jail cell shortly after being booked, according to City and State New York.

Child sex traffickers, terrorist sympathizers, robbery suspects, domestic abusers and others were allowed to stroll out of jail ahead of their trials, regardless of their ability to make bail. Cuomo — amid backlash — increased the threshold for the types of crimes judges were allowed to impose monetary holding power for in April, but the changes don’t take effect until July, City and State New York reported.

“It’s basically like playing Monopoly. People go around the board and get a get-out-of-jail-free card,” Vice president of the Sergeants Benevolent Association Vincent Vallelong told the Daily Caller News Foundation in an interview. 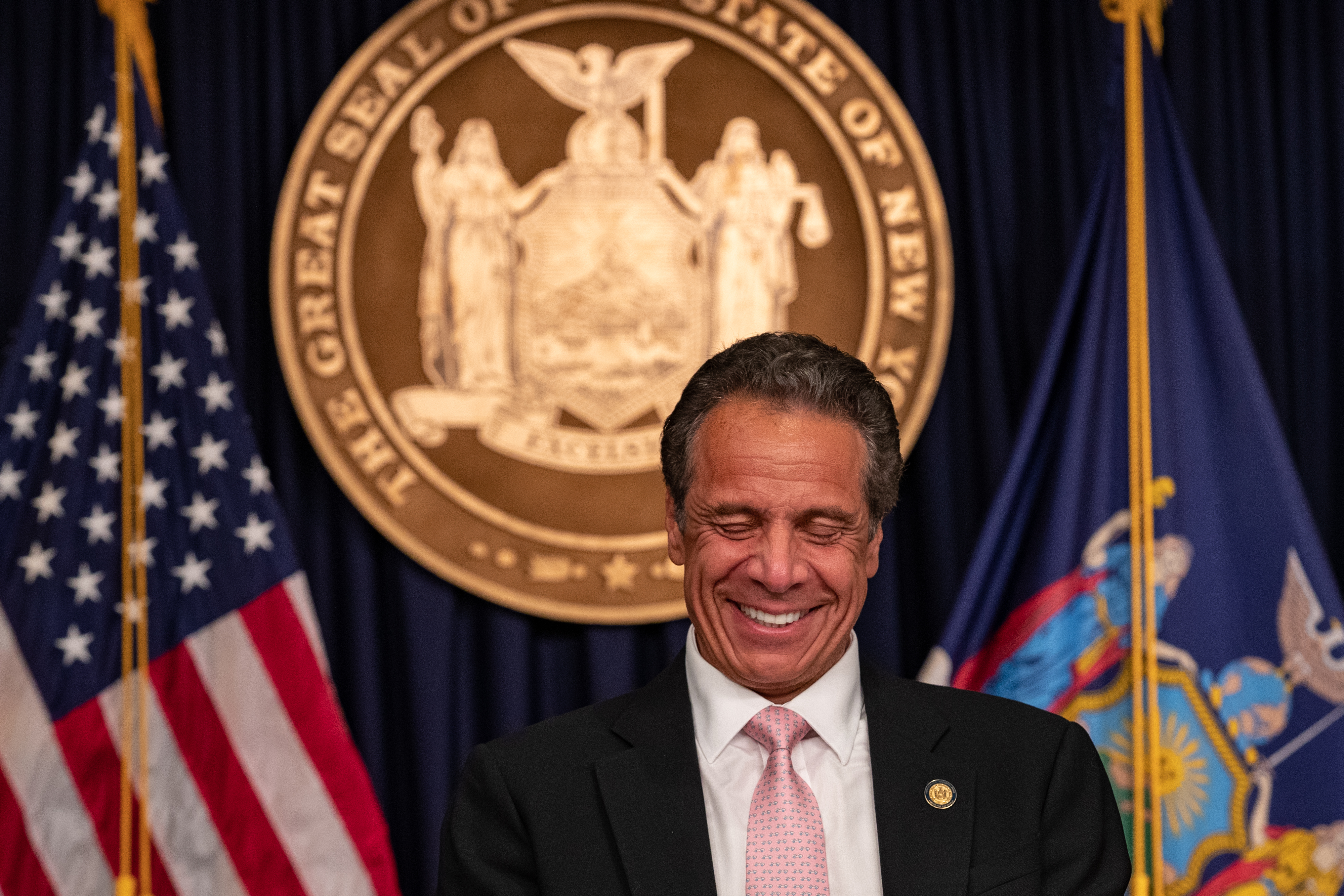 Governor Andrew Cuomo reacts during the daily media briefing at the Office of the Governor of the State of New York on June 12, 2020 in New York City (Photo by Jeenah Moon/Getty Images).

Cuomo’s reforms added 15 crime categories that judges could impose bail on. These include sex trafficking, aggravated assault, burglary, strangulation and vehicular manslaughter, among others. His April proposal also gave leeway for judges to jail repeat offenders who commit felonies and those with felony probation violations, City and State New York reported.

Proponents of bail reform argued against the changes to the original bill calling it “unconscionable” and “backwards.”

“Granting judges dangerousness would be the worst possible scenario. But rolling back reform at all during a time like this is really just unconscionable, given that any rollbacks to bail reform will mean more people being held pre-trial,” Clarise McCants, a campaign director at Color of Change, a racial justice organization, told City and State New York.

“While we can celebrate that it’s not the worst thing we’ve ever seen, it still does signify a step backwards when we need to be moving forwards,” she added.

The District Attorneys Association of the State of New York disagreed in a statement given to the DCNF.

The New York Democrat’s amendments to his original crime overhaul came after repeat offenders took advantages of loopholes in the law. Here are a few of the felons released by the Empire state since the governor’s original reform took place:

Frank Pagan has reportedly been arrested 24 times since April — eight of which were for felonies. The 55-year-old sex offender was released from an Empire State jail on 19 separate occasions due to bail reform, according to the New York Post.

The repeat offender was accused of threatening to murder his ex wife after he left a voicemail detailing that he’s “got grenades” and “a shotgun” and was looking to shoot her in the head and burn her house down, the Post reported. His most recent arrest comes after he was cuffed for allegedly stealing a motorcycle and attempting to bring it on a NYC subway, the Post reported.

Pushing it onto the subway rather than down the street is no way to avoid being busted with a stolen motorcycle. The man, already wanted in another case, was arrested for grand larceny and criminal possession of stolen property. pic.twitter.com/H5OAjIxPDo

Pagan has also stolen from a police cruiser and nabbed several other vehicles in a few months time, according to authorities.

The New York District Attorneys Association used the 55-year-old’s criminal past to advocate for judicial reform in its statement given to the DCNF.

“Frank Pagan is a clear example of why judicial discretion is needed for certain defendants based on the individual circumstances related to the crimes that were allegedly committed,” the association said.

Rashid Brimmage allegedly pushed a 92-year-old woman head-first into a Manhattan fire hydrant last week. The elderly woman lay bleeding on the sidewalk after the incident, which was caught on video, until a bystander called 9-1-1, according to the New York Post.

Brimmage — who’s also a convicted sex offender — was arrested and released promptly for three prior crimes before he was accused of shoving the unsuspecting woman to the ground, police sources told Fox News.

On June 12 at 3rd Avenue between 15th and 16th Street, this individual pushed a 92-year-old woman to the ground causing her to strike her head on a fire hydrant. pic.twitter.com/Nr2GaTiqm6

The NYPD told the DCNF last week that the 31-year-old has been arrested at least 65 times since 2005.

The elderly woman he allegedly tossed to the sidewalk said she’s afraid to walk the neighborhood she’s spent the last 50 years in. (RELATED: Man Charged With Shoving 92-Year-Old Woman Has Been Arrested At Least 65 Times: NYPD)

“This damned guy put me in a state where I’m fearful to walk the streets alone,” she told the Post. “So my super’s trying to find somebody who will walk me to a park nearby or to the supermarket, that kind of thing. So that’s the problem.”

Charles Barry was arrested and subsequently released five times in five weeks since the start of Cuomo’s bail reform. Each time he walked out of jail, he committed another offense, The New York Daily News reported in February.

Barry — who’s reportedly been behind bars 138 times — is a serial pickpocket, subway thief and credit card poacher. Judges were expressly forbidden from levying bail against him since January, according to the New York outlet.

Barry bragged he was untouchable to a New York Daily News reporter in a follow-up report. “I’m famous! I take $200, $300 a day of your money, cracker! You can’t stop me!” he yelled at the reporter.

“Bail reform, it’s lit!” Barry continued. “It’s the Democrats! The Democrats know me and the Republicans fear me. You can’t touch me! I can’t be stopped!”

The 56-year-old allegedly posed as a public transit authority and stole money from a senior citizen in February. He’s spent six stays in federal prison and has been locked up for selling drugs in years past.

Assistant Chief Gerald Dieckmann of the NY Transit Authority blamed Cuomo’s bail laws in an interview with the outlet.

“At least before, he’d be remanded and be behind bars for a couple of days. He wouldn’t be able to victimize people,” he told the New York Daily News.

Dana Goodman was arrested days after Cuomo’s bail reform took root, according to authorities. The 34-year-old was accused of raping and endangering a 13-year-old in Covert, New York, according to a Seneca County Sheriff’s Office press release.

The man was cut loose shortly after he was brought to jail — bail free — per the governor’s new orders at the time.

“Goodman’s release was in compliance with the new bail reform laws as the least restrictive non-monetary condition imposed by the court,” the press release read.

The NYC Police Benevolent Association (PBA), the largest law enforcement union in the Empire State was appalled that the 34-year-old was released.

“Dana Goodman, 34, was charged with predatory sexual assault, first-degree rape, and endangering the welfare of a child.”

“Sheriff Luce says that Goodman’s release was in compliance with the new bail reform laws…”https://t.co/N5uJ9gJp8k

Eugene Webb allegedly punched a woman in the mouth on Sept. 3, and was released to later return in front of a judge. He didn’t show up for his court date; instead, he allegedly knocked a woman’s tooth out and threw another female to the ground in two separate incidents in January, according to the New York Daily News.

The 26-year-old — who’s homeless — reportedly giggled as he left the courtroom, following his second release. The Manhattan DA sought to enforce bail, but it wasn’t possible under the Cuomo restrictions, the Daily News reported.

“This case says more about our city’s deficient system for dealing with homelessness and serious mental illness, and how they intersect, than it does about bail reform,” a spokesperson for the attorney organization told the Daily News.