The publisher of a Democratic events calendar refused Tuesday to publish a pro-life event during the Democratic National Convention, saying she was “just not comfortable” posting an event that is “inconsistent” with the Democratic Party platform.

DemList publisher Kimberly Scott refused to publish the remote event “Pro-Life Caucus at the DNC” in an email response to Democrats for Life Executive Director Kristen Day.  Scott told Day that she opposed the ideology behind the event and was “not comfortable” posting it on the Democratic events calendar. (RELATED: Pro-Life Dem Faces Backlash From His Own Party, Says Exclusivity Is ‘How We Got President Trump’)

“I am afraid a pro-life event is inconsistent with the party platform, but most importantly, contrary to my views as a long time advocate of pro-choice, reproductive rights,” Scott told Day in an email obtained by the Daily Caller News Foundation. “As DemList is actually my own publication, I am just not comfortable posting the event.” 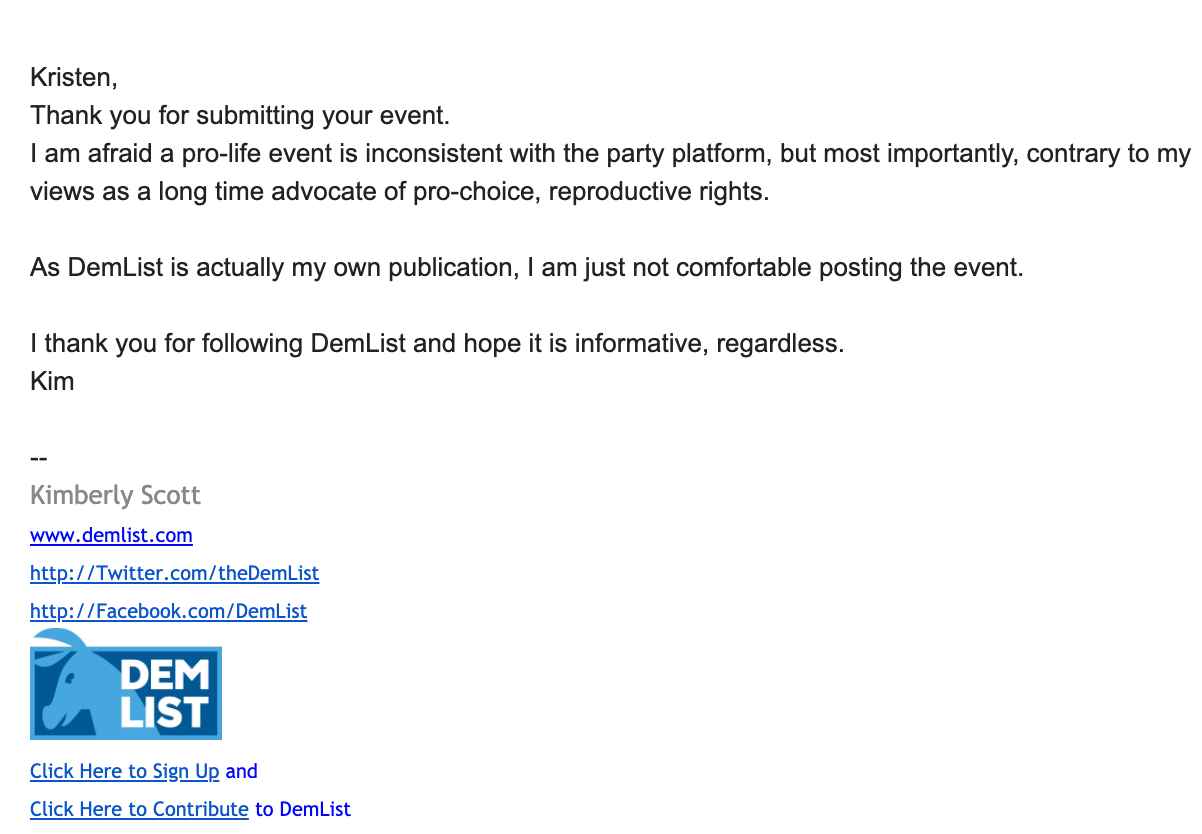 The “Pro-Life Caucus at the DNC” event is scheduled to take virtually place August 17 and will feature prominent pro-life Democrats including Democratic Louisiana State Rep. Katrina Jackson, according to the event description.

“Are you fed up with abortion extremism in the Democratic Party,” the event description asks. “Are you left-leaning, moderate, independent, or a Republican who would consider voting Democrat if the Party wasn’t so Pro-Abortion? Are you tired of having your vote taken for granted? You’ve come to the right place!”

“We are the majority and we will not be silenced,” the description adds. The DNC did not immediately respond to a request for comment from the DCNF.

Scott shared her reply to Day’s email in response to a request for comment from the DCNF. The DemList publisher emphasized to Day that she did not speak on behalf of the Democratic Party and that DemList is not a party publication.

“As then and now, I respect the differences in positions,” she added.

Day told the DCNF that Democrats are increasingly opposed to pro-life candidates and members of the party.

“There is increasing discrimination against pro-life Democratic candidates, elected officials, and voters. The latest litmus test by the DemList is an unfortunate trend from groups who we worked with prior to 2020,” Day told the DCNF.

“It is disheartening that a Party that claims to stand against discrimination actively allows discrimination against Democrats who believe that we must do everything we can to reduce abortion, keep reasonable regulation of the abortion industry and protect the most vulnerable – pre-born child and the mothers carrying them,” the Democrats for Life executive director added.

“The increasing extremism of support for abortion in the Democratic Platform and the refusal to even consider language that would end an abortion litmus test will continue to push an exodus from the party,” Day said.

According to the DemList website, the DemList calendar was formerly the Democratic Party’s recommended calendar and “daily source” for both the 2012 and 2016 Conventions as well as the 2017 Alternative Inaugural Events. (RELATED: Sanders: ‘Being Pro-Choice Is An Essential Part’ Of Being A Democrat)

Scott describes DemList as “a free national daily political column and resource site for Democrats and allies – a unique, central source that connects people to the who, what and where of Democratic events, issues and activism.” Events currently listed for the convention include the Minnesota Farmer Labor Party Delegate Breakfast, the DNC Hispanic Caucus Meeting, Coalition For The National Infrastructure Bank, the American Muslim Democratic Caucus, and the DNC LGBTQ Caucus Meeting, among others.

The incident comes as high profile Democrats have distanced themselves from pro-life members of the party heading into a 2020 election cycle in which abortion may be a major issue for voters.

Former Democratic Illinois Rep. Dan Lipinski, one of the few remaining pro-life Democratic lawmakers, lost to his primary challenger Marie Newman in March — despite a five figure campaign of support from the pro-life Susan B. Anthony List.

Rhetoric from 2020 presidential candidates emphasizes that the Democratic Party no longer includes those who oppose abortion.

“I think by this time in history, I think when we talk about what a Democrat is, I think being pro-choice is an essential part of that,” said former 2020 presidential candidate and Vermont Sen. Bernie Sanders in February. (RELATED: Media Ignores Buttigieg Refusing To Say He Does Not Support Infanticide)

“There are 21 million of us. And if so, would you support more moderate platform language to ensure the party of diversity and inclusion does include everybody?” Day  continued.

Buttigieg said that though he respected her views, he would not try to earn her vote “by tricking” her.

“I am pro-choice,” Buttigieg said. “I believe a woman ought to be able to make that decision.” (RELATED: This Pro-Life, Female Democrat’s Law Is At The Heart Of Upcoming Supreme Court Abortion Case)

Day said that Buttigieg did not address her question and pointed out that the Democratic platform “contains language that says we don’t belong.”

“I support the position of my party that this kind of medical care needs to be available to everyone,” Buttigieg told her.

Day later told the DCNF that Buttigeig gave voters “a reason to vote against him” when he told her that her views were not embraced by the Democratic Party.

Editor’s note: This post has been updated to reflect comments from Kristen Day and Kimberly Scott.