Fox News host Jesse Watters explained why he believes there has been a “momentum shift” in the race between President Donald Trump and presumptive Democratic nominee Joe Biden.

As Biden continues to lead handily in national polls, Watters pointed to several recent actions undertaken by Trump along with a recent poll showing the race tightening in battleground states, making the topic of “the Trump turnaround” the subject of Saturday night’s “Watters’ Words.”

“You can feel the momentum shift in the presidential race,” Watters said. “It showed up in the polls in key battleground states.”

The Fox News host showed the breakdown of CNBC’s latest polling that showed Trump gaining ground in the battleground states of Pennsylvania, Arizona, Florida, Michigan and Wisconsin, although Biden still leads in all and has gained ground in North Carolina. 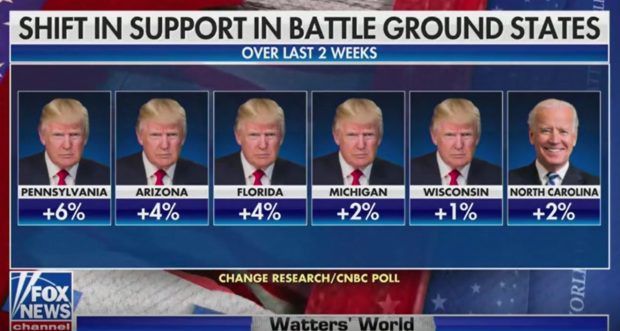 “Forget about the national polls,” Watters contended. “It’s all about the battlegrounds anyway. Most pollsters are undersampling Republicans as high as 10 points. They do that just to depress turnout. Don’t fall for it.”

For “perspective,” Watters pointed out that former Democratic presidential nominee Hillary Clinton was “beating Trump in every single battleground state going into the 2016 election.”

“Biden, he doesn’t have anywhere near that talent, and that’s why he’s hiding,” Watters said.

The Fox News host argued that Trump “has been a lot more focused” over the last few weeks.

“He’s brought back the coronavirus briefings, addressing the nation six times from the briefing room. The tone is more serious, realistic, and steady,” he concluded.