A growing number of people within President Donald Trump’s conservative support base say they feel insulted over the aggressive, spam-like text messages they receive from the Trump campaign and national Republican groups seeking their money.

Studies have shown that more than 90 percent of text messages are opened and read within three minutes of being sent, making it a valuable tool in the arsenals of Democratic and Republican campaigns to conduct outreach with their supporters.

The Republican apparatus surrounding the Trump reelection effort has gone a step further by placing the technology at the center of its digital strategy, according to Politico.

As a result, the cellphones of many self-proclaimed Trump supporters have become inundated with aggressively-worded text messages from toll-free numbers accusing them of abandoning their president if they don’t fork over their cash to Republican groups. 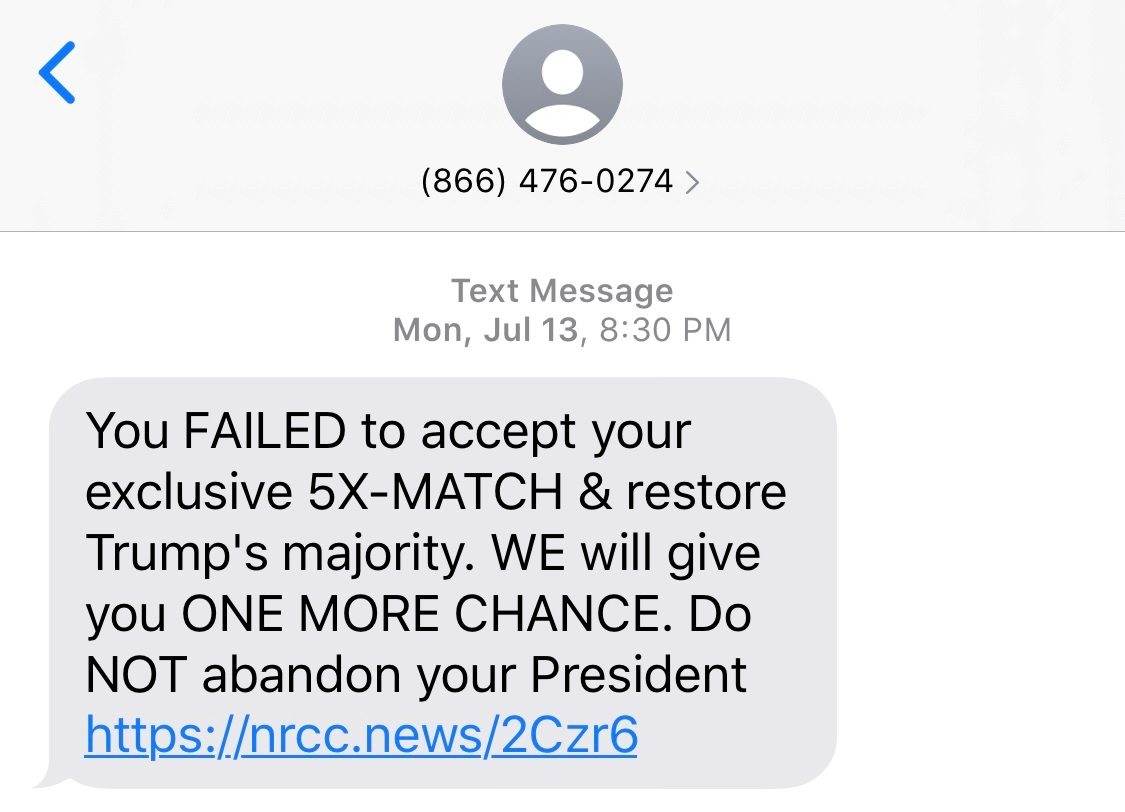 Banner said some of the texts she receives purport to be sent by Trump asking if she wants to have dinner with him. Others sent by the campaign accost her for not being on a certain Trump campaign donor list, she said.

“It makes me insulted,” Banner said. “It makes me feel as though he underestimates his base, which I am one of and a lot of other people that I know, and I don’t know anybody this appeals to.”

Banner told the DCNF that she’s a “strong Trump supporter” that used to donate monthly to his campaign but had to pause her contributions in summer 2019 after an injury put her out of a job.

But even on her reduced income, Banner said she may have considered giving to the Trump campaign if they asked nicely.

“But these kinds of things have the opposite effect on me, makes me want to withhold my money,” Banner said. “If they said things respectfully I would certainly give them way more consideration than that kind of crap, excuse me.” 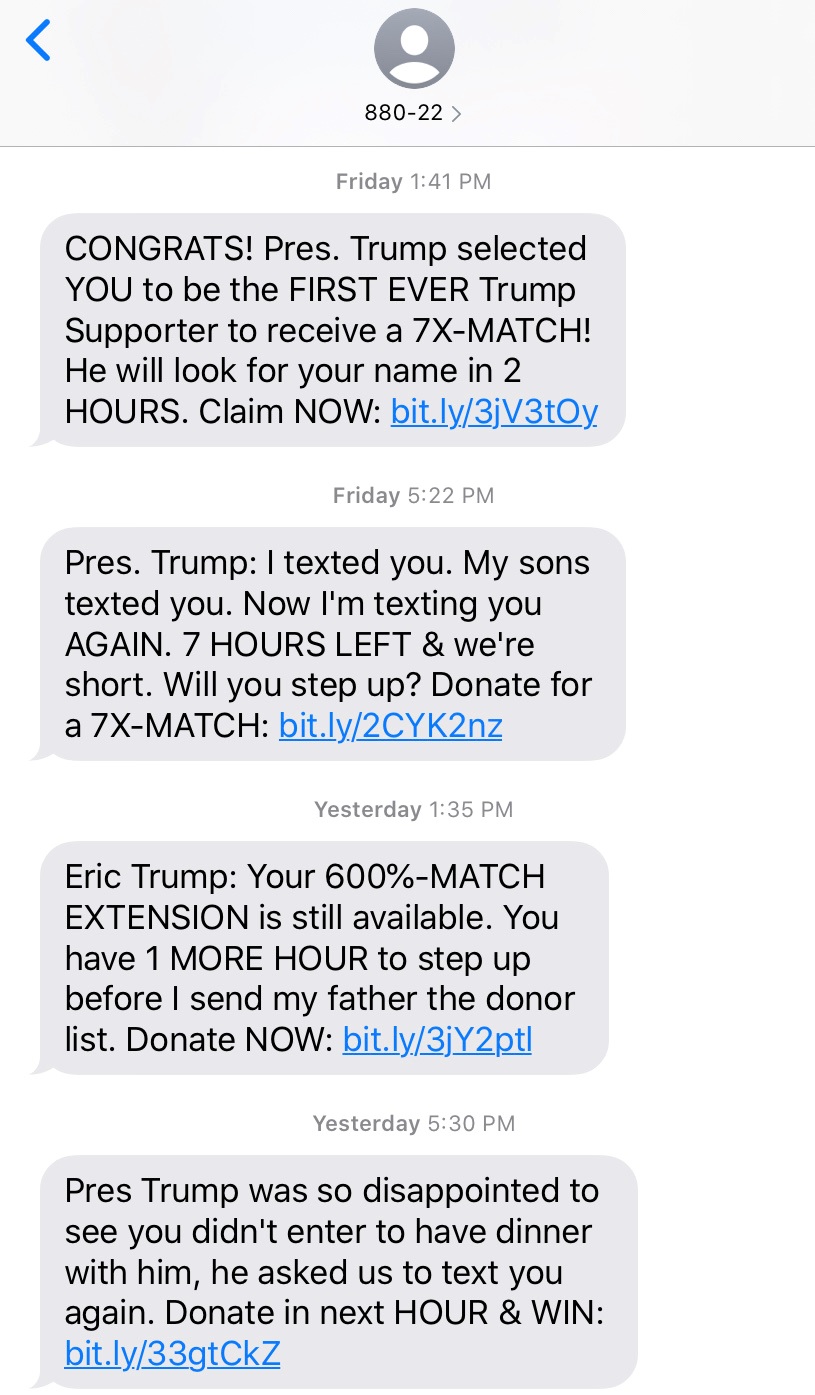 Pennsylvanian Trump supporter and contributor Bill Supplee said he started receiving a noticeable uptick in text messages from the Trump campaign and national GOP groups after much of the country went under lockdown in the spring due to the coronavirus pandemic. Supplee said the format and frequency of the texts makes him think they could be the work of scammers.

“I’ll reply, ‘stop,’ and the next day I’ll get more texts from a different number,” Supplee told the DCNF. “It’s crazy. I don’t know if it’s a scam or what. Nobody’s getting my money now.”

“Some of the messages are very pressuring,” Supplee said. “During COVID many people are on a fixed income. It’s not very thoughtful to be reaching out to put more pressure on people to donate.” (RELATED: Rep. Liz Cheney Clashes With Direction Of GOP Campaign Arm)

The Trump campaign’s prolific use of text messages has already landed it in trouble with major cellphone providers.

Anti-spam monitors employed by AT&T, Verizon and T-Mobile temporarily blocked the Trump campaign’s ability to send texts during the July 4 weekend after sent over 1 million patriotic-themed get-out-the-vote messages, according to Politico.

Some of the texts were sent to people who had not given their consent to receive messages from the campaign, leading the cellphone companies to fear that the texts could have violated federal anti-robocall laws, Business Insider reported.

‘Do NOT abandon your President’

Peck, who runs the New York-based political consulting firm Excelsior Strategies, told the DCNF that he’s noticed a growing number of what he calls “broken glass” Trump supporters — the type of supporter that he says would “literally crawl across broken glass to cast a ballot for their candidate” — grumbling online about the tempo of text messages accusing them of abandoning or letting down the president whom they so fervently support.

“The problem is the verbiage, this notion that the base has let them down,” Peck said. “That is really a bad message for the GOP base, which probably since the time of the Obamacare repeal efforts has felt that they did their part and the leadership of the party let them down.”

Peck highlighted the National Republican Congressional Committee (NRCC), the GOP group that supports Republicans in the House, as being particularly aggressive in the way it solicits funds from its supporters.

“Look at the verbiage of this particular text,” Peck said, referring to a message he received from the NRCC in July. “You failed, all caps, to accept your exclusive 5x match and restore Trump’s majority. We will give you one more chance, all caps, do not abandon your president.”

“President Trump enjoys unparalleled support from the Republican base. He’s touting approval ratings in the GOP well over 90%,” Peck said. “The base hasn’t abandoned President Trump.”

Peck said it was ill-advised for the NRCC to approach its supporters with such language, noting that he’s seen polls suggesting that the GOP’s plan to retake the House in November is starting to falter.

“Going out there and blasting the base for that may not be the best strategy,” Peck said. 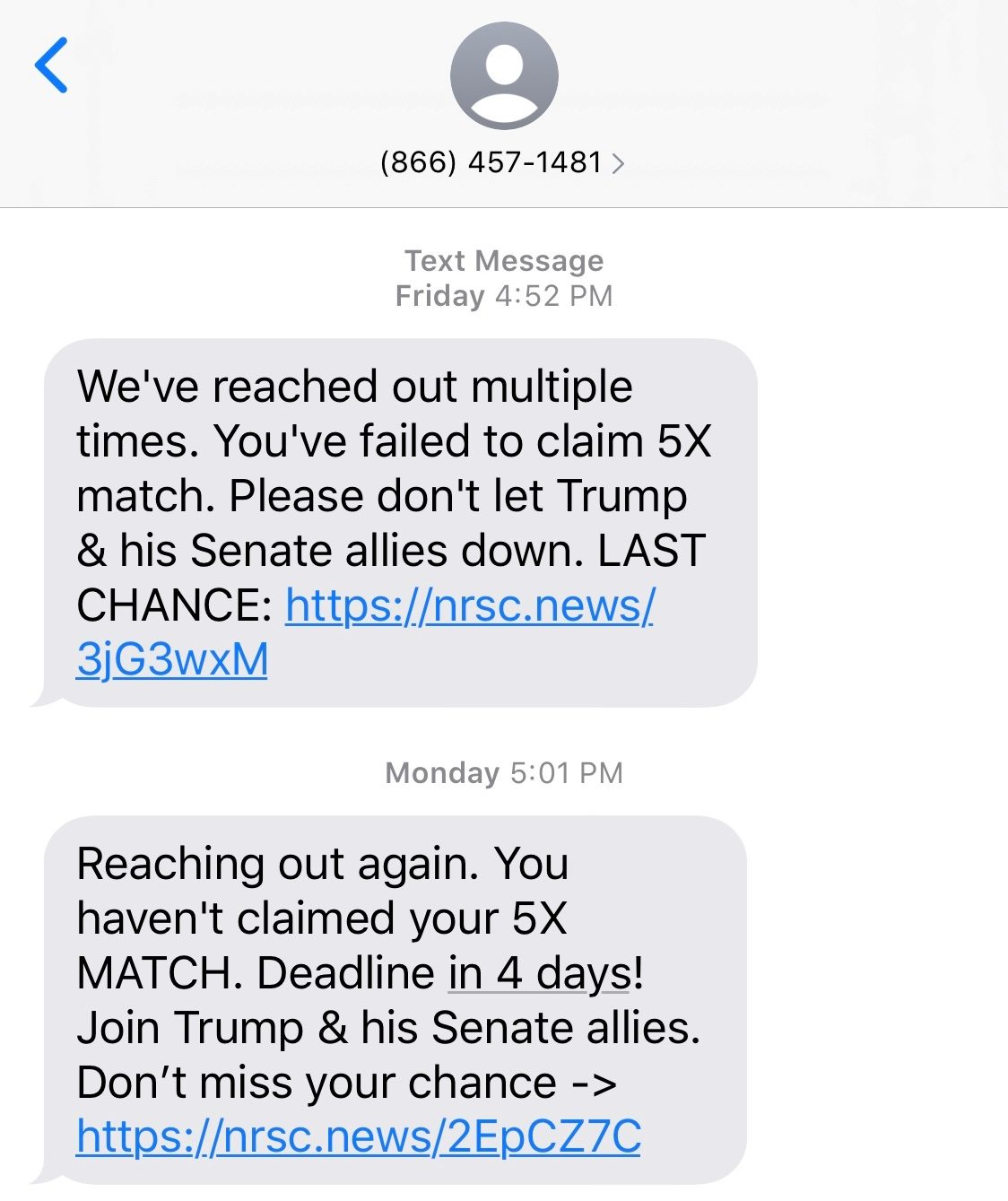 Despite grumblings in the conservative base, the Trump campaign and national GOP groups have defended their frequent use of text messages to conduct outreach and fundraising.

The NRCC went as far as to publicly mock a Kurt Schlichter, a prominent pro-Trump political commentator who urged the group to stop with the aggressive texts.

Hey @NRCC – WTF is wrong with you?

Stop this. Do it now. pic.twitter.com/BTQ3bnCU4q

“This text raised $198,021 toward electing conservatives to Congress,” the NRCC said in response to Schlichter’s plea. “But we’ll certainly pass your complaints on to our manager, Karen.”

This text raised $198,021 toward electing conservatives to Congress. But we’ll certainly pass your complaints on to our manager, Karen. https://t.co/ayRbnMq0PP

Supplee, the Pennsylvanian Trump supporter, said the NRCC’s response to Schlichter’s tweet is “just another thing that kind of turns me off from the Republican Party.”

“It stinks, it’s disappointing,” he said. “They don’t seem to care about the little guy. They just want to get in power.”

“That’s not something that’s going to get you back to 218+ [seats] in the House,” Peck said. “You tell me you raised $200,000 off that text? That’s awesome, but you better be raising more money than that, and again at what cost? If your base begins to feel a level of resentment, that has ripples too.”

The NRCC, the NRSC and the Trump campaign did not return requests for comment.