A total of 26 soldiers from the Fort Hood military base in Killeen, Texas have died so far in 2020, officials told a local Texas outlet.

Soldiers have been murdered, killed in accidents and have succumbed to disease and suicide, according to KWTX 10. The most recent death was Wednesday. Fort Hood reportedly accounts for more deaths than other major stateside military bases in 2020.

Fort Hood’s top commander, Maj. Gen Scott Efflandt, was removed from his position on Sept. 1 after allegations of rampant sexual assault on the base emerged, according to the El Paso Times. Efflandt was subsequently denied a position at Fort Bliss in El Paso.

Here’s what we know about some of the deceased.

Pvt. Corlton L. Chee, 25, died Wednesday after collapsing during a physical fitness test, according to the Statesman. Chee collapsed on Aug. 28 and was rushed to a local hospital, but he succumbed days later, the local outlet reported.

The private was Native American, and the Navajo Nation called the incident “deeply disturbing” and demanded an investigation, according to CBS News.

He was the 28th soldier from Fort Hood to die this year https://t.co/jEWCJUdvo7 pic.twitter.com/l4rV1muNpi

Sgt. Elder Fernandes, 23, was found dead approximately 25 miles away from Fort Hood after his Aug. 17 disappearance, according to the Boston Globe. The sergeant was found hanging from a tree in an apparent suicide, the Globe reported.

Fernandes was allegedly the victim of sexual assault from a superior officer and he was transferred to another unit after he reported the event to base authorities, the Boston outlet reported. His death was officially ruled a suicide earlier in the week, according to the New York Post.

Pvt. Mejhor Morta, 26, was found dead near a dam on July 17 after he was declared AWOL for not being present for training the day prior, according to ABC News. Authorities say the 26-year-old had drowned, and Morta was the third dead soldier on base in the month of July, ABC reported.

Spc. Vanessa Guillen, 20, was found dead in June burned and dismembered in a box, the New York Times reported. Guillen gained widespread media attention after her April 22 disappearance, according to the Times.

A fellow soldier allegedly killed Guillen, hid her remains in a box and fatally shot himself before he could be apprehended by police, according to a criminal complaint obtained by the Times. Guillen’s family had raised an alarm that the specialist was sexually assaulted before her disappearance.

A subsequent investigation into the circumstances surrounding 20-year-old’s death was launched on Sept. 1, according to CBS News.

Spc. Aaron David Robinson, 20, was identified by authorities as the man allegedly behind Guillen’s death who took his own life when confronted by officers, according to KCBD. Robinson allegedly bludgeoned the 20-year-old specialist with a hammer and attempted to discard her corpse, the local outlet reported.

Robison’s girlfriend Cecily Anne Aguilar, 22, was arrested for attempting to destroy evidence and the attempted destruction of a human corpse, according to KCBD. (RELATED: Woman Charged In Case Of Missing Fort Hood Soldier Who Was Bludgeoned, Dismembered)

Pvt. 2nd Class Gregory Morales, 24, disappeared from Fort Hood in August of 2019 and was later found dead in a field on June 19, according to Military.com. Authorities suspected foul play when his corpse was found, and the 24-year-old, who was originally classified as AWOL, has since been removed from the list of runaways, Military.com reported.

Morales received full military honors at his burial, according to the outlet. His mother told the Washington Post that authorities “failed him by not looking” and they “just assumed the worst and let it go.” 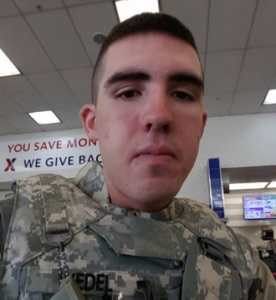 Pfc. Brandon Scott Rosecrans, 27, was allegedly murdered by 28-year-old Brandon Michael Olivares while he sat in his Jeep in mid-May, according to the Army Times. Both Rosecrans and Olivares were traveling in the vehicle when the shooting occurred and the 27-year-old’s body was dumped 13 miles from Fort Hood, the Times reported.

The Jeep was found torched at the same time that Rosecrans’ body was discovered, according to the military outlet.

Condolences to the family, friends and teammates of Pfc. Brandon Scott Rosecrans.https://t.co/cEx5hlenxh pic.twitter.com/0YNoAyhFqU

Spc. Freddy Beningo Delacruz Jr., 23, was found dead in March alongside two other deceased victims in the same apartment, one of whom was a veteran, according to Stars and Stripes. Police discovered the bodies after responding to a call about a water leak in the complex, the outlet reported.

Officers located the three bodies, all of which had gunshot wounds, according to Stars and Stripes.

Spc. Christopher Wayne Sawyer, 29, was found unresponsive in his Food Hood residence on March 5, according to a press release from the base. U.S. Army authorities investigated his death, but did not suspect foul play at the time of the release.

Sawyer was the recipient of the “Army Achievement Medal, Global War on Terrorism Medal, National Defense Service Medal and the Army Service Ribbon,” according to the press release. The Fort Hood press center has not released further information or a photo of the 29-year-old.

Spc. Shelby Tyler Jones, 20, died on March 1 after he was allegedly shot during a visit to a local strip club near Fort Hood, according to the Army Times. Officers responded to a convenience store at around 3 a.m. and tried to resuscitate Jones, but he was pronounced dead miles from base, the Times reported.

ICYMI: Spc. Shelby Tyler Jones, a Fort Hood soldier, was shot and killed Sunday at a strip club near the base. https://t.co/QIasS81OyT