Two law enforcement training experts from different parts of the country said traditional use of force instruction is severely lacking as calls for police reform and nationwide unrest continue to grow.

The Daily Caller News Foundation spoke with John Jay College of Criminal Justice professor and 10-year Israeli police veteran Maria Haberfeld as well as former Detroit and Arizona special operations police officer and professional instructor Darryl Rivers. Both said that department-level training on both lethal and non-lethal force is insufficient to tackle on-the-job scenarios that endanger the lives of officers and those around them.

“General law enforcement training is fashioned for the individual who has no combative skills or techniques, so the training that is given is made to be picked up by anyone that could basically breathe and do a couple of pushups,” Rivers, who helped construct Arizona’s police use of force policy, told the DCNF in a phone interview.

“It’s very low-level training in the police academy because they want everyone to be able to do it, so sometimes it’s not as effective out on the streets because it’s very basic,” he continued.

Haberfield, who oversees an NYPD training program, told the DCNF in a separate phone call, “I’ve been doing training and researching training and writing about training for over two decades. If there’s anything I know, it’s police training. And I’ve been employed around the country and around the world. We have the worst trained police force in any democratic country.”

“This is because of the politicians not willing to allocate enough resources, and now they are throwing officers under the bus even further. Not only are they not giving them the tools, they are taking away the only tools that they have,” she continued.

Both Haberfeld and Rivers spoke about a concept known as the “use of force continuum,” where officers begin interactions with verbal commands and escalate their tactics if someone is uncooperative. An officer’s presence and voice are the first steps, followed by physical force, then non-lethal options like Tasers and pepper spray, escalating all the way up to lethal force, the two experts said.

“People kind of get it mixed up, so sometimes officers will feel as though they have to go through the entire continuum in order to not get in trouble,” Rivers said,  “‘Oh, I can’t start with my Taser, I have to go hands-on’ and those officers generally get hurt. Then you have officers that just leapfrog a couple of steps when it’s not necessary to do so.”

Haberfeld brought up another issue with department training, insisting that there is no universal instruction standard throughout U.S. police precincts. 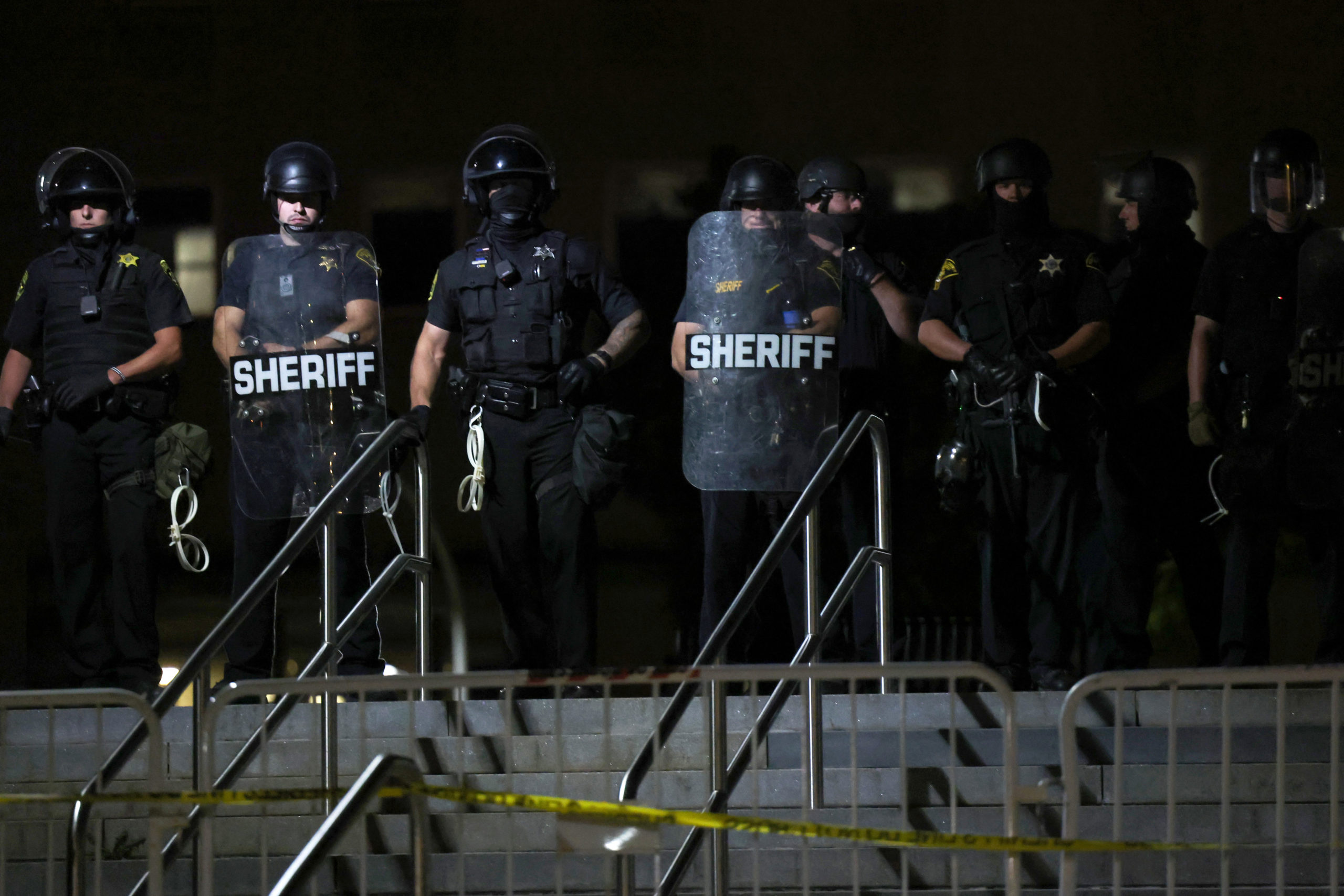 Police officers stand in line as demonstrators take up space in front of the Public Safety building after marching for Daniel Prude on September 06, 2020 in Rochester, New York (Photo by Michael M. Santiago/Getty Images).

The professor said there are roughly 18,000 police departments in America and most states have their own boards to direct state law enforcement codes. Haberfeld said that police chiefs and other leaders also direct training protocols, further complicating standards.

“We literally have tons of modalities of training,” she said. “So, there are no standards, nothing.”

The 10-year Israeli police veteran said calls to defund law enforcement following the death of George Floyd are only making training worse for the men and women in blue.

“People who [want to defund departments] don’t understand what kind of damage they are creating, or maybe they do understand and don’t care, ” Haberfeld said.

“[Training] is the first thing that goes when they start defunding the police force because 85-90 percent of the budget goes to salaries, and whatever else is divided between equipment and training. So, equipment they need, so we would see even worse training in the years to come.”

Rivers, who works under a company called L.E.A.D, which stands for Leadership, Education and Development, runs one of the largest de-escalation training courses in the nation through the Public Agency Training Council. He chooses to offer supplemental training for officers around the country because he believes they don’t receive enough.

Rivers said most cops are only able to get around eight hours a year of tactical defense training from their superiors and he said this may lead to officers not being aware “when their lives are in danger.”

Some officers, according to the professional instructor, “respond with deadly force” in situations where they don’t have to “and in their mind, they’re justified in doing so because of their lack of experience in that type of environment.”

Rivers focuses on “situational training,” where he tackles the mental aspect of decision making in real events rather than what he calls a “black and white approach,” which is more of a classroom-style training. For instance, he said firearms training is excellent, but officers often lack the instruction to discern when it’s the right time to draw their firearm in the first place.

Haberfeld commented on public opinion regarding police training and credibility, saying, “I’ve written so much I’ve done so much empirical research. I am recognized for training more than anybody in the country or in the world for that matter. I spend my vacations in police academies around the world.” (RELATED: Cutting Police Funding Will Lead To Understaffing, Reduced Training, Union Official Says)

“And now, you know, everybody on the street basically knows more than I do about policing,” she continued. “That’s just hurtful. The colleagues I talk to feel the same way, no one has any credibility, and we are legitimate scholars.”

Rivers said, “Everyone leans [sic] to be overly passive now because no one wants to use force nowadays and the citizens know that. That is a major problem. I know officers that absolutely love their job, but they’re scared to do it now.”