Nebraska fans are having the exact kind of reaction you’d expect after Wisconsin canceled the game scheduled for Saturday.

The Badgers had to cancel the game in Lincoln because of a serious coronavirus situation and 12 positive tests within the program. While I’m not happy about it, I understand it because I believe in beating the virus at all costs, and I would never encourage football to be played if it didn’t have to be. No matter what tweets you might see of mine going viral on Twitter, I promise you that this is now my stance. (RELATED: David Hookstead Is The True King In The North When It Comes To College Football)

Apparently, people in Nebraska don’t feel the same way. The Cornhuskers message boards are popping off with how we’re trying to avoid Nebraska (give me a break) and @HuskersSports posted a poll about whether not the game would happen if the roles were reversed.

The poll has since been deleted, but not before I got a screenshot of it! 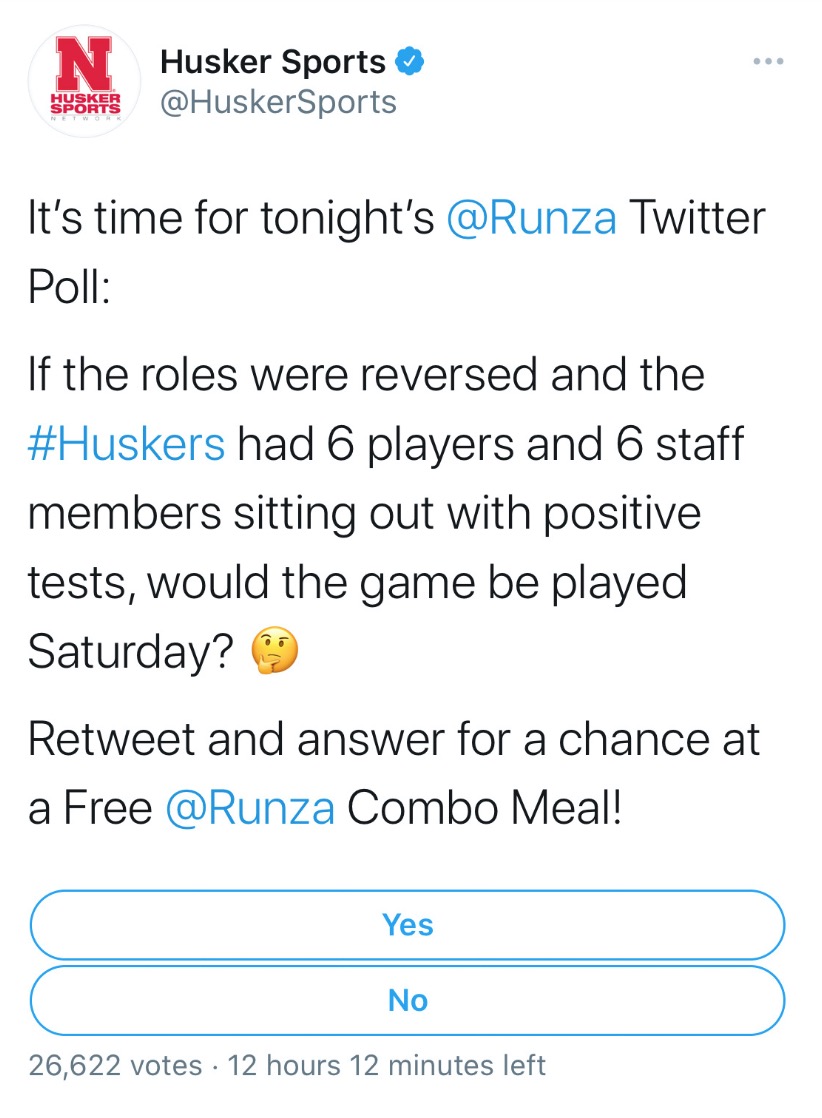 It’s sad, but I think we all knew this was coming. Yeah, I’m sure that Wisconsin is trying not to play *checks notes* a team we’ve thoroughly dominated for damn near a decade, haven’t lost to since 2012 and is currently on a seven-game winning streak against.

Yeah, that’s exactly the kind of team we’re trying to not play, my friends. It makes perfect sense. It’s not like we’re dodging Ohio State or anything here.

Nebraska, a program that hasn’t won more than 10 games in a season since 2001, thinks the Badgers are scared to play them.

I might actually be annoyed if I wasn’t too busy laughing.

Secondly, we’re in the middle of a pandemic! Do the good people of Nebraska not see that? Wisconsin is at war against a virus ravaging society.

Sometimes, things are just bigger than sports. I’m willing to set aside one game of the season in order to save the state.

I guess sacrifice and service was something that was never taught in school in Nebraska. While they’ll do anything to play the game, I’m focused on making sure we win the war against the pandemic.

You don’t need to call me a hero. That’s for the history books to decide, but I damn sure don’t need to hear this unnecessary chirping.

Be better, Nebraska. Be much better. If you’re feeling so frosty, don’t worry because we’ll see each other in 2021. I’m sure their eagerness won’t be nearly as bold when that game rolls around!