DUNMORE, Pa. — The schismatic successor of a Korean religious sect’s leader has inspired a mass influx of Japanese nationals to Pennsylvania who have eagerly campaigned for the re-election of President Donald Trump, as many of them believe he is fighting an international, Satanist deep state.

Over a hundred Japanese citizens took weeks of vacation, quit jobs, paid for round-trip tickets, reserved hotel rooms, and came to America to support Trump after Rev. Sean Moon, their spiritual teacher and ‘King of Kings,’ told his flock that it was crucial for them to show their support for the incumbent president, members who traveled from Japan told the Daily Caller News Foundation with the help of a translator.

“I had to talk to my company and then get permission,” said Takahiko Tanimoto, 69, a security guard from Japan. “Last election, 2016, I was thinking about Trump and didn’t think he was good. But Moon told us to support him. This is Moon’s direction.”

Now, Tanimoto says he has become a vocal critic of the Federal Reserve bank, which he sees as a nefarious enemy of the American people, and by extension, the world. 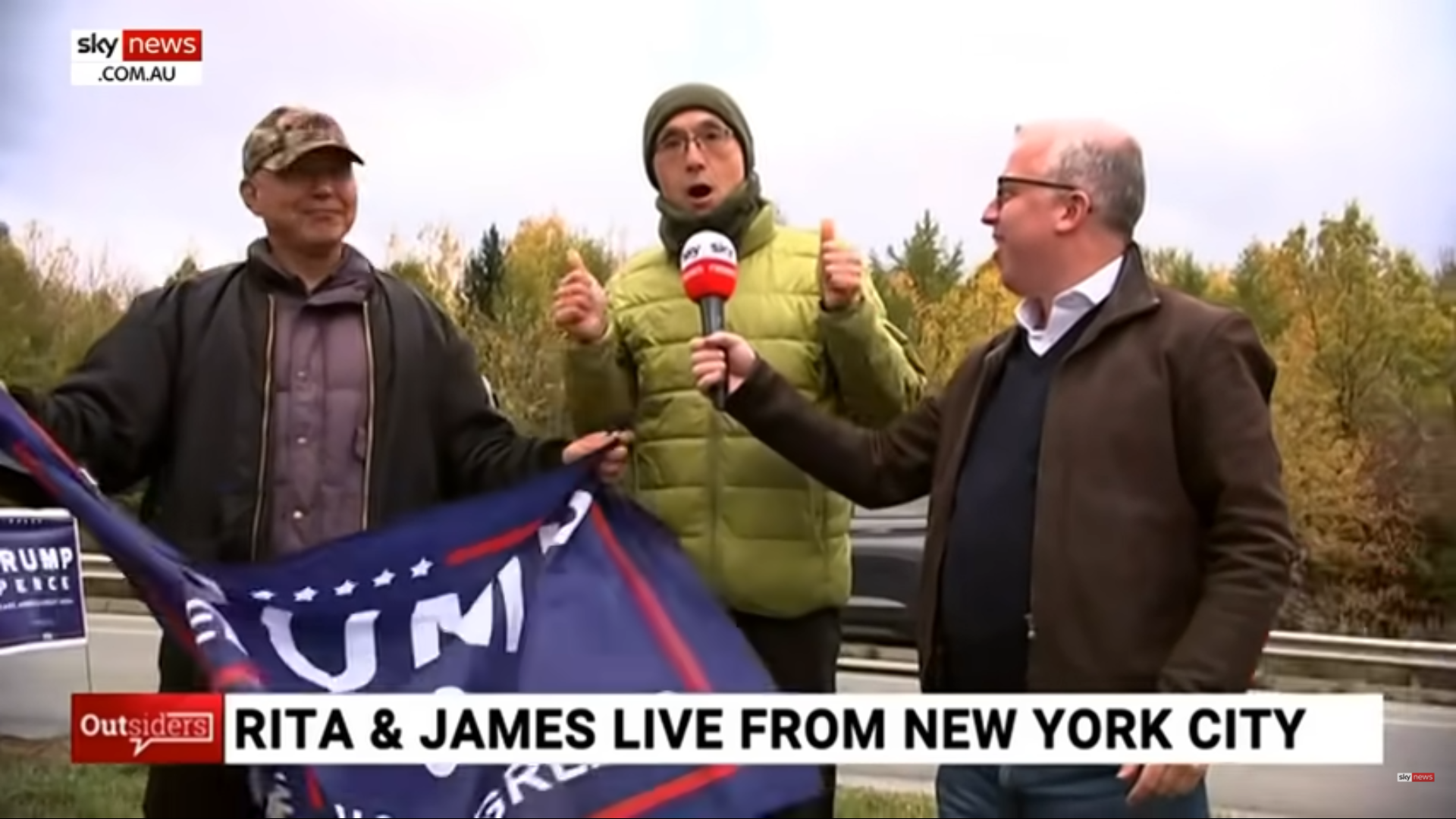 Sean Moon is the leader of Sanctuary Church and Rod of Iron Ministries in Newfoundland, Pennsylvania — a religious organization that professes a non-Nicene form of Christianity centered around Sean’s father and the founder of the Unification movement, Sun Myung Moon, who claimed to be the successor of Jesus Christ.

The Unification movement is well-known in America for its policy of arranged marriages. Sun Myung Moon encouraged interracial marriages as a way of combatting racial hatred, and played personal matchmaker for young couples around the world. Many would go on to marry without meeting each other first in massive ceremonies involving hundreds of couples. (RELATED: Washington’s Moonie-Owned Newspaper Wants To Improve Its Reputation)

The movement suffered a split after the death of Sun Myung Moon in 2012. While Sean Moon and his small group of schismatic followers claimed that Sun Myung Moon explicitly named Sean as his successor in leading the movement, conflicts began to arise between the wife of the late leader.

Sean Moon was stripped of his titles and kicked out of the Unification movement by his mother and traveled to America to live with his brother. It was in Pennsylvania that he began preaching out of his house, eventually building a large enough following to buy a vacated Catholic Church. Sanctuary Church is no longer legally or theologically connected to Sun Myung Moon’s original organization.

Sean Moon routinely warns his followers about the perils of communism and left-wing ideology, a position he inherited from his father. The movement’s association with right-wing politics is well–documented, and has now culminated in many members’ belief that Trump has been divinely appointed to the Oval Office by God.

Sean Moon described the current measures being taken by governments worldwide as “the 666 Anti-Christ B System.”

Members of Sean Moon’s movement told Daily Caller News Foundation that they see the 2020 election as pivotal in a war against the “deep state,” which they describe as a shadowy and Satanic organization that is pulling strings to bring about the destruction of Christianity. Sean Moon’s followers are willing to completely uproot themselves for the cause. (RELATED: What Is QAnon? The Conspiracy Theory Grabbing Media Headlines)

Yoshiaki Yokohata, 65, an employee at a Japanese transit company, said when he told his employer he wanted such extensive time off of work to go to America, he didn’t have many issues.

Masaki Matsumoto, 67, is a clerk at a business hotel. He was prepared to quit his job because he “wanted to support Trump” no matter the cost. His boss eventually told him that terminating his position wouldn’t be necessary.

“If President Trump wins, many people currently hiding will reveal themselves and make problems for him,” said Koji Ida, 73. “Many Chinese spies.”

Sean Moon’s followers have been photographed and reported on by local outlets across Pennsylvania after a series of bus trips and van caravans to political rallies across the state. They often carry Japanese flags and give small speeches through their interpreters, but most speak virtually no English. 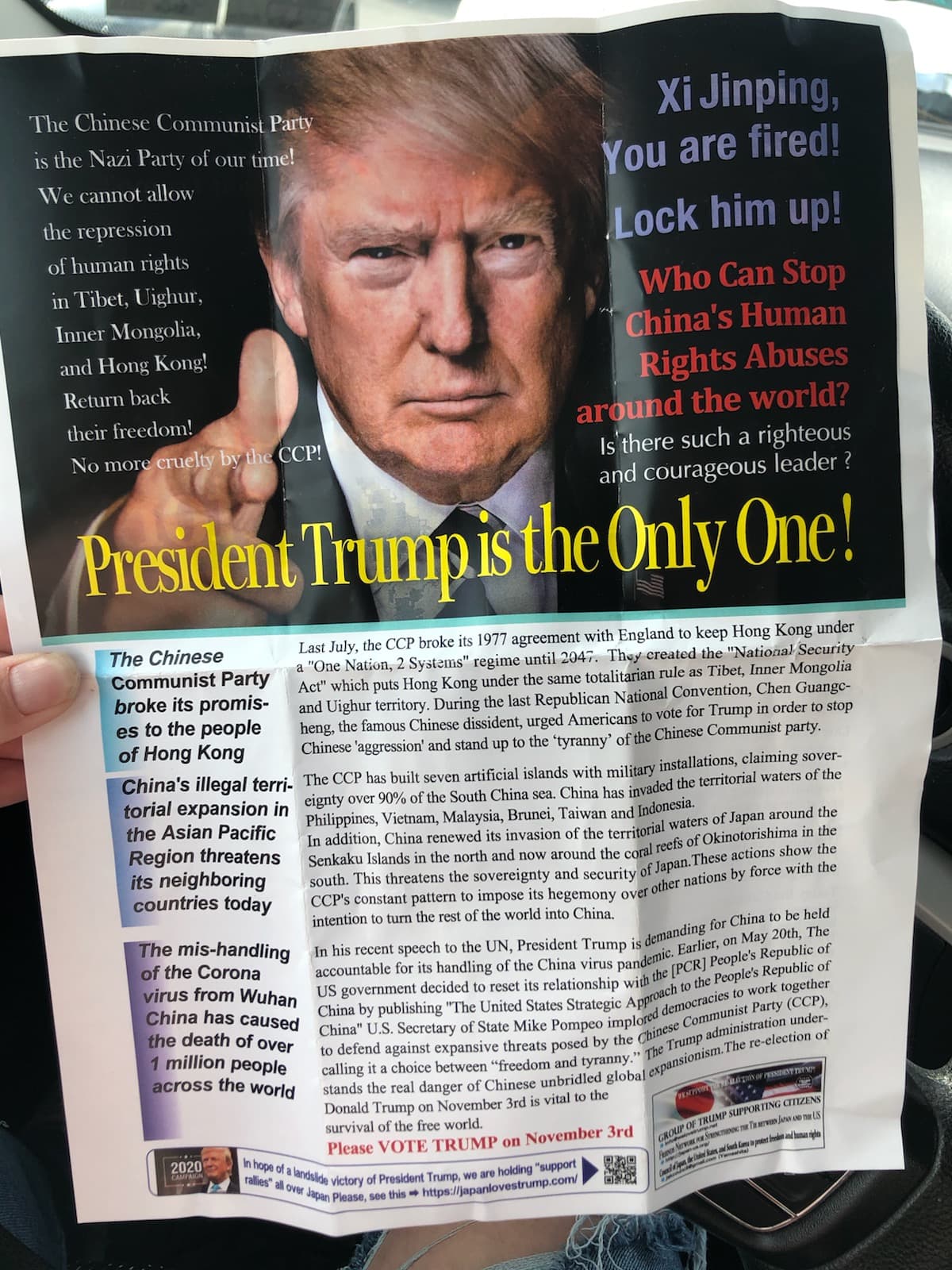 The efforts of the Japanese Trump supporters have not gone unnoticed in Pennsylvania, with various media outlets reporting on the phenomena. One exhibition in Wilkes-Barre that saw a counter-protest from supporters of Democratic nominee Joe Biden reportedly received international coverage.

“TV Tokyo from Japan was on hand to document the dueling campaigns. Two national networks from Switzerland were also there,” according to local Pennsylvania outlet The Citizen’s Voice.

“It wasn’t specifically Japan. He called on people from all over the world to come here,” said Jim Stephens, a member of the Unification movement since 1973 and a member of Sean Moon’s church. “Our largest international church is in Japan at the moment.”

“I’ve seen a couple of people from Poland,” he added.

Stephens, 71, is a member of Sean Moon’s flock and is married to a Japanese member of the church. Their marriage was arranged by Sun Myung Moon himself. Stephens currently works coordinating over 108 Japanese members into vans and sends them across the state to political events. Additionally, he houses approximately ten of the group’s leaders in his own home.

There are smatterings of other nations represented in their rally groups, including from Korea and Australia. All of them carry the same grim warning, however.

“There have always been irreconcilable differences between communism and Christianity,” said Rod Cameron, 70, a retired bus driver originally from Australia who resides in America with his wife, a Brazilian believer he was matched with by the church. “Communism is a threat. It really is a galactic fight.”

With such a strong aversion to communism, the enemy state that the followers of Sean Moon fear most is China, which they fear would exploit a Biden presidency in order to aggressively and violently seize power on an international scale. Members pass out flyers at Trump rallies that refrain from vocalizing their most radical theological beliefs, but place heavy emphasis on China and its human rights violations.

Mami Fujii, 54, and Chie Kataoka, 58, are both nurses for elderly patients. They took extensive vacation time to travel to America for the campaign when Sean Moon asked his followers to come to Pennsylvania. Fujii had already heard about conspiracy theories concerning Satanism and pedophilia online. When asked if she was referencing the “QAnon” community of conspiracy theorists, she said she had seen the term before, but was unfamiliar. (RELATED: QAnon Reigns Free On Amazon Despite Its Recent Ban Of Proud Boys, Redskins Merchandise)

“The reason I like Trump is because he doesn’t receive a salary,” said Kataoka. This is a point that most hold as crucial to Trump’s ability to combat the pedophiles and Satanists they believe are running the “deep state,” saying that it keeps him neutral and honest.

Unification services are known for their unorthodox aesthetics. Members of the movement are encouraged to bring their guns to services in order to assert members’ ability to protect themselves. Parishioners also wear ornate gold and silver crowns during worship, meant to signify their own personal sovereignty. Sean Moon himself often sports a crown made of bullets.

Regis Hanna, 73, is the media contact for Sanctuary Church and has been a missionary of the movement with his wife for 20 years. He says that followers who have come from Japan have covered their own expenses the entire way.

“Some of them quit jobs. They’re paying for their hotels, transportation, everything,” Hanna said.

Hanna is optimistic about the movement’s growth, saying “The congregation keeps growing. When they come here, they know, yeah, that’s the real deal.”