Workers’ rights and business trades groups strongly denounced the pro-union Protecting the Right to Organize Act after it was reintroduced by the House and Senate Thursday.

If passed by Congress and signed into law by President Joe Biden, the Protecting the Right to Organize Act (PRO) Act would overhaul several aspects of existing labor law in the U.S. The bill is also very pro-union and legislation labor unions say they “have to have,” Grover Norquist, president of Americans for Tax Reform, told the Daily Caller News Foundation in November.

“This bill is a threat to America’s workers, employers, and our economy,” he added. (RELATED: Here Are The Pro-Union Labor Laws Joe Biden Has Promised To Pass As President)

Senate Health, Education, Labor and Pensions Committee Chair Democratic Sen. Patty Murray and House Education and Labor Chair Democratic Rep. Bobby Scott both reintroduced the bill Thursday, CNBC reported. The Pro Act was first introduced by Democratic leaders in May 2019 and passed in the House mainly along party lines in February 2020, but never received a vote in the Senate. 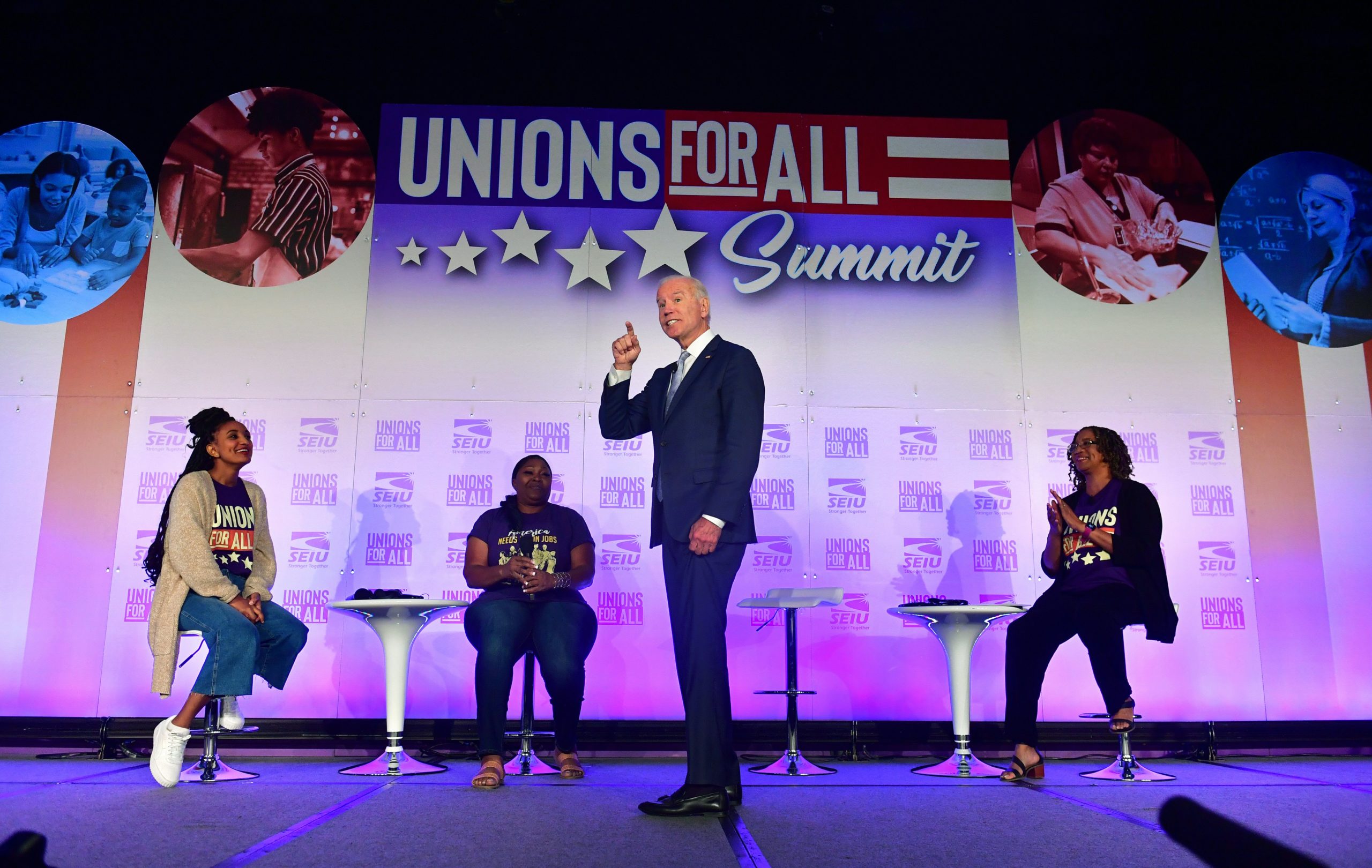 President Joe Biden speaks during the SEIU Unions for All Summit in Los Angeles, California on Oct 4, 2019. (Frederic J. Brown/AFP via Getty Images)

The PRO Act is a compilation of various policy changes that labor unions support, which would make it easier for unions to organize private-sector employees and minimize employees’ choice in unionization. Biden promised to sign the Pro Act during his campaign. (RELATED: Biden Fires US Labor Board’s Top Lawyer In Unprecedented Move)

The American Federation of Labor and Congress of Industrial Organizations (AFL-CIO), a federation of 55 unions and 12.5 million total members, has endorsed the legislation, saying it would allow American workers to exercise their “most fundamental rights on the job.”

“The PRO Act will strengthen workers’ ability to come together and demand a fair share of the wealth we create—boosting wages, securing better health care and rooting out discrimination,” AFL-CIO President Richard Trumka said in a statement after it was reintroduced.

The bill makes it illegal to permanently replace striking workers, empowers the National Labor Relations Board to overturn a democratic workplace unionization election and forces millions of freelancers to join unions, the National Right to Work Legal Defense Foundation (NRTW) said in an email to the DCNF Thursday. The NRTW joined other groups in slamming the PRO Act, saying the legislation would “impose a laundry list of … union boss power grabs.”

“The PRO Act is the worst bill for franchising ever considered in Congress,” the International Franchise Association (IFA) said in a statement. “At a time when so many small businesses are still struggling in the wake of the pandemic, it’s disappointing so many members of Congress have chosen to support legislation that would eviscerate the franchise business model as we know it.” 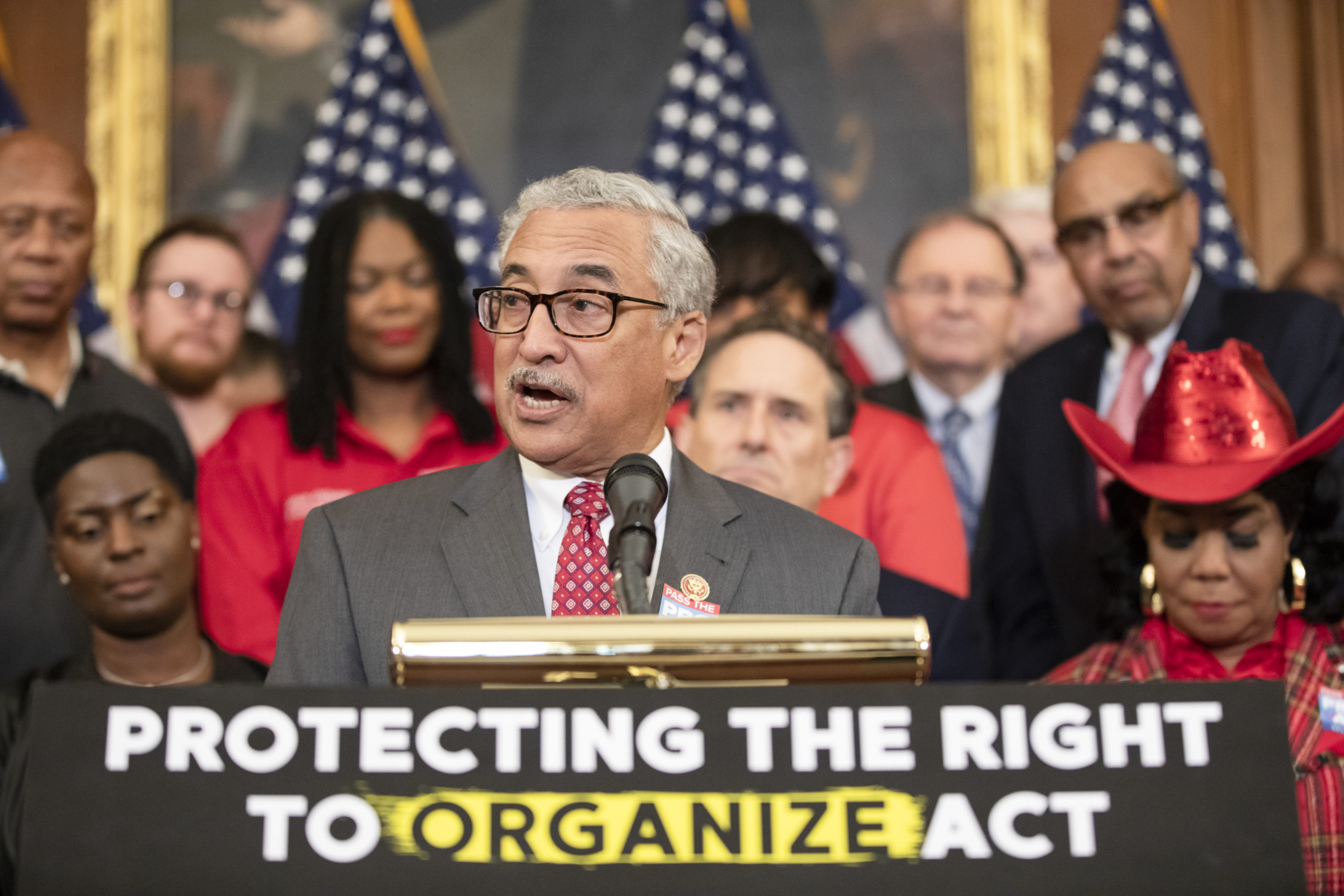 Rep. Bobby Scott, Chairman of the House Committee on Education and the Workforce, speaks during a press conference advocating for the PRO Act on Feb. 5, 2020 in Washington, D.C. (Samuel Corum/Getty Images)

“If enacted, this bill will cripple restaurants, the overwhelming majority of which are small- and family-owned businesses operating on single digit margins—and what hurts these businesses hurts their employees and their communities,” Shannon Meade, National Restaurant Association vice president of public policy and legal advocacy, said Thursday.

The PRO Act would overturn existing state right-to-work legislation, which guarantees citizens the ability to choose whether they’d like to join or not join a labor union, according to the NRTW. This type of legislation is fiercely opposed by unions, which they say take rights away from working people. (RELATED: Biden’s Labor Board Begins Withdrawing Complaints Against Unions)

Such laws exist in 27 states, according to the National Conference of State Legislatures. Nine of those states have adopted amendments, which enshrine right-to-work in their constitution.

“Under this legislation, the 87% of construction workers who choose not to join a union could be forced to pay union dues as a condition of employment,” ABC CEO Michael Bellaman said in a statement. “The PRO Act would overturn the voice of the voters in 27 right-to-work states and wipe out employee privacy rights during unionization drives.”

“When union bosses can force people to pay dues or ‘fees,’ they don’t have to worry about what those people want or need,” said NRTW President Mark Mix. “Often, the only thing the union bosses end up caring about is how much money they can collect, and how lavishly they can spend it on their own comfort and on the politicians they keep in their hip pockets.”