President Joe Biden has drawn criticism for receiving Communion at Mass as a politician who promotes policies explicitly opposed to Catholic teaching.

Traditional Catholic scholars warn that the president is causing great scandal by receiving Holy Communion, while progressive theologians protest that Church teaching is open to interpretation and say that abortion should not be a litmus test for Communion.

The president has spoken about his Catholicism through his entire political career, referring to his faith as a source of solace during turbulent times in his life. Biden exhibits many outward signs of his Catholicism: he frequently goes to mass, has met with Pope Francis, mentions praying the rosary and visits the cemetery where his family members are buried.

Yet as soon as he became president, Biden immediately took action to fund and promote abortion — which the Catholic Church condemns as a “crime against human life.”

Biden’s public stances on abortion previously prompted a priest to deny him Holy Communion during a 2019 Mass. (RELATED: Here’s How Joe Biden Has Evolved On Abortion As He Attempts To Become President)

“Sadly, this past Sunday, I had to refuse Holy Communion to former Vice President Joe Biden,” Father Robert E. Morey told the Morning News. “Holy Communion signifies we are one with God, each other and the Church. Our actions should reflect that. Any public figure who advocates for abortion places himself or herself outside of Church teaching.”

The Catholic Church teaches that Catholics may not receive Holy Communion if they are “conscious of a grave sin.” Catholics who have committed any grave sins must make a good confession before they can receive, according to the Church.

San Francisco Archbishop Salvatore Cordileone warned pro-abortion Catholic public figures not to receive Communion at mass if they find that they “are unwilling or unable to abandon” their “advocacy for abortion.” He also told the Daily Caller News Foundation in an interview that clergy should have conversations with high profile pro-abortion politicians like Biden before denying them Holy Communion.

“In the case of President Biden or any other prominent Catholic, I think what I would do is if I knew that they were coming into the area here and planned to attend mass, I would try to have those conversations as well ahead of time,” he said.

“If we don’t say anything, if we don’t speak out, then we are also culpable,” Cordileone told the DCNF. “I tremble at the responsibility that God has given me … When it comes to pastoral application of church teaching, that’s where pastoral discretion is needed, different judgements might be made by different bishops in different situations.”

“But in the case of someone so prominent as the president of the United States, again this is a scandal, and it’s causing confusion in the minds of our Catholics,” he said.

Progressive Theologians: ‘Sometimes A Catholic Is Just A Catholic’

Not all clergy agree with Cordileone. D.C. Archbishop Wilton Gregory previously said he would not deny Biden Communion at Mass in late November, and has not responded to requests for comment from the DCNF as to whether he stands by this statement.

Other Catholic commentators suggest that “sometimes a Catholic is just a Catholic” and that passing judgement on who may or may not receive Communion is hypocritical. (RELATED: ‘Devout’ Or ‘Extreme’: Media Treats Catholicism In Vastly Different Ways Depending On Politics)

“Deploying Communion as a bludgeon to selectively sanction elected officials on a single issue is not the answer,” Faith in Public Life Catholic Program Director John Gehring wrote in response to Cordileone’s comments.

“Politicizing a sacrament is pastoral malpractice, whether directed against Republicans or Democrats,” Gehring said. “But the glaring inconsistency and hypocrisy in the selective use of Communion denial makes it nearly impossible for pro-Trump church leaders to rebut criticism that their concerns are more partisan than theological. ”

“By defining abortion as the definitive marker of Catholic identity in politics, the bishops risk marginalizing the church at a time when only the second Catholic president in history attends Mass every week and advocates for a policy agenda that in myriad ways aligns with Catholic social teaching,” Gehring wrote.

Feminist theologian Dr. Mary E. Hunt wrote that it is “absurd” for “bishops to pronounce who among the laity is worthy to receive communion.”

“Communion is not a litmus test of orthodoxy nor a prize for theological correctness,” writes Hunt, who is also co-director of the Women’s Alliance for Theology, Ethics and Ritual. “It is a simple way people get together to express gratitude amidst life’s vicissitudes and to draw strength from companionship at the table and energy for justice struggles … To ensnare this simple act in theo-political red tape is to profane the Eucharist itself. Sigmund would agree that sometimes a rosary is just a rosary. Sometimes a Catholic is just a Catholic.”

“Two things are at stake: is there only one Catholic teaching on a particular issue, and who decides what Catholic teaching is,” Hunt told the DCNF. “Many theologians, myself included, recognize a diversity and pluralism among committed Catholics on a range of issues.”

“For example, we do not say that those who favor the death penalty or are instrumental in applying it through the courts may not receive Communion,” she said. “Likewise, many theologians claim that the sensus fidelium, the views of the many and varied faithful Catholics, play a significant role in determining Catholic teachings, plural.”

Other clergy like Jesuit James Martin, a frequent critic of former President Trump, suggest that Biden’s policies do not put him at odds with the church but merely present “a different way of being Catholic.”

Pecknold: Biden Misleading ‘Catholics And Non-Catholics Alike About The Faith’

But Dr. Chad Pecknold, an associate professor of Theology at the Catholic University of America, pointed out to the DCNF that Biden breaks with the Catholic Church on a number of points, specifically “on the dignity of human life in the womb, on the human person as male and female, on the nature of marriage and human sexuality, and on the freedom of the Church.” 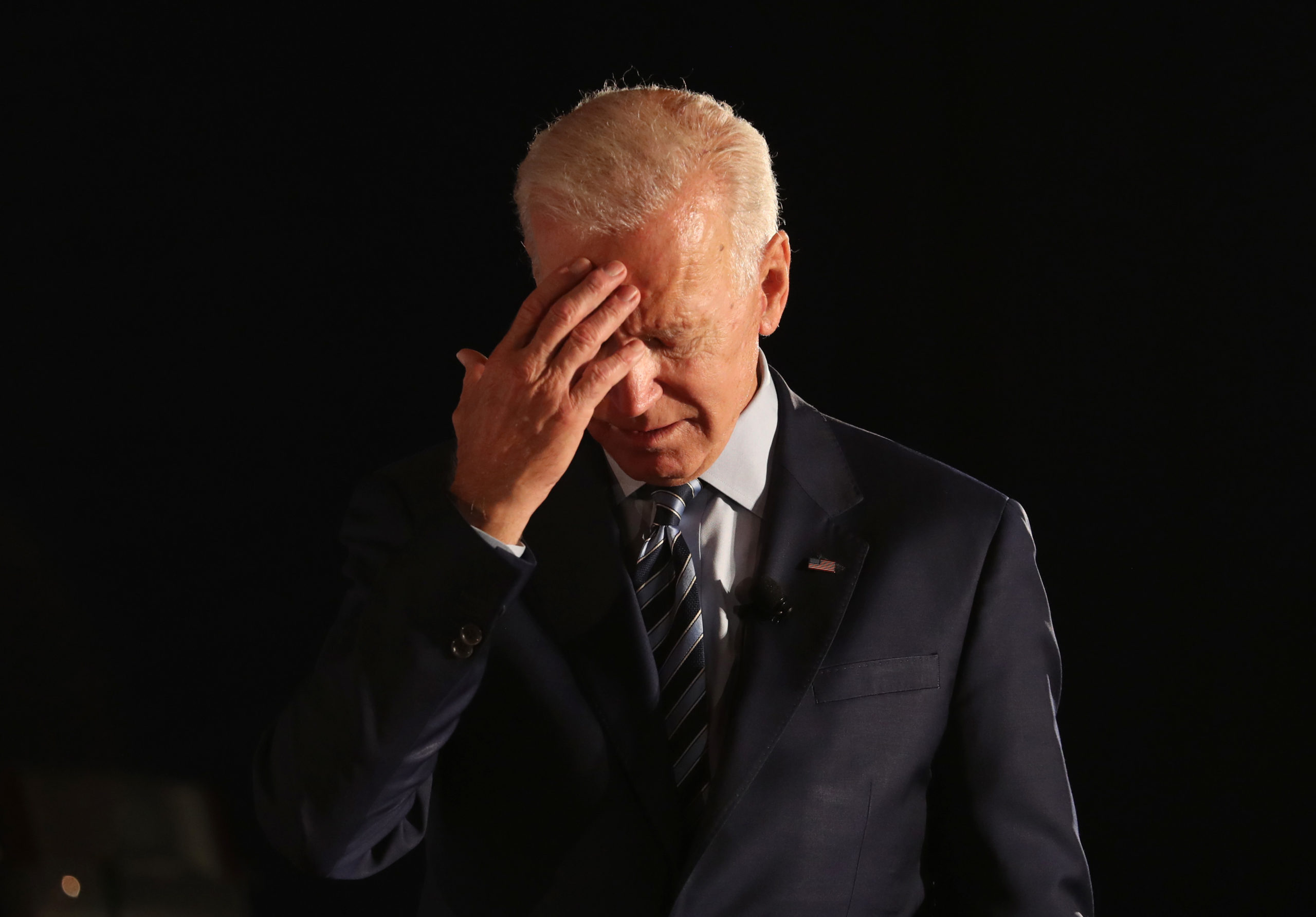 DES MOINES, IOWA – JULY 15: Democratic presidential candidate former U.S. Vice President Joe Biden pauses as he speaks during the AARP and The Des Moines Register Iowa Presidential Candidate Forum at Drake University on July 15, 2019 in Des Moines, Iowa. Twenty Democratic presidential candidates are participating in the forums that will feature four candidate per forum, to be held in cities across Iowa over five days. (Photo by Justin Sullivan/Getty Images)

Biden not only puts himself at odds with the Catholic Church by receiving Communion but also causes those who give him Communion to put themselves in jeopardy with the church, Pecknold said. (RELATED: Pelosi’s Archbishop: Unwavering Pro-Abortion Catholics Must Be Denied Communion)

“Mr. Biden openly and obstinately, in his public words and deeds, repudiates not only truths of nature, but the very faith that he professes to practice,” the CUA professor told the DCNF. “This is enough to endanger the soul of Mr. Biden, but whenever he is allowed to improperly receive the Eucharist, he not only heaps further judgment upon himself, but bishops who permit this help him to do so.”

“Such public acts mislead Catholics and non-Catholics alike about the faith, and especially the nature of the Eucharist,” Pecknold continued. “The bishops have a duty and an opportunity to teach the faith which Christ handed onto them.”

“I hope they do so for the benefit of the whole Church, the nation, and also for the eternal soul of Mr. Biden,” he said.

Ultimately it is clergy themselves who are confronted by pro-abortion Catholic politicians in their communion line, and it is the clergy who make a decision whether or not to deny that politician.

Shortly after the 2020 election, the DCNF asked several Washington, D.C., area priests if they would feel comfortable giving Biden communion. Most declined to comment, but Fr. Daniel Gee, pastor at St. Rita’s Catholic Church in Alexandria, Virginia, told the DCNF that he would “absolutely not” give Biden communion. (RELATED: ‘We Cannot Stay Silent’ On Biden’s Pro-Abortion Stances, Leading Catholic Bishop Says)

“Why would I consider someone who is so publicly opposed to the Church’s teachings and so actively working against them to be in communion with us,” Gee told the DCNF in November. “He is an enemy of the unborn and has flaunted the Church’s teachings for the last 40 years. How dare he even present himself in the first place?”