In the wake of a contentious school board meeting in Loudoun County, Virginia, some parents are questioning whether or not members of the school board tried to rig the meeting.

During the June 22 meeting, the school board voted 9-0 to cut off the public comment portion after former state Sen. Dick Black’s remarks drew loud applause. In the wake of that cutoff, two parents were arrested.

Parents protesting against CRT and a transgender policy are arrested after a Loudoun County, Virginia school board meeting was declared an unlawful assembly pic.twitter.com/XyyuvozlUA

Ian Prior, the executive director of Fight for Schools, told the Daily Caller in an email, “The signup form for the meetings are usually Friday a.m. at 8. This time they were Thursday at 8 a.m. and no one was aware, yet conveniently the first bunch of speakers were all there to defend” the school board. Many parents are accusing six board members of being part of a secret Facebook group that targeted parents opposed to the use of critical race theory in Loudoun County Public Schools (LCPS), according to Prior. Those parents and others then decided to launch a recall campaign targeting those board members. 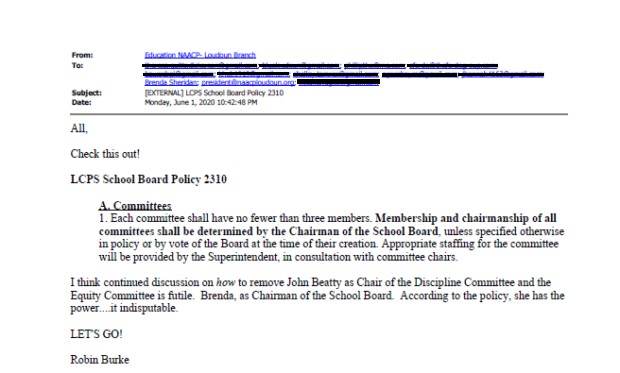 Email from Robin Burke, chairwoman of the Education Committee of the NAACP Loudoun Branch

Prior also sent the Daily Caller a link to a June 15 tweet by Loudoun Democrats advertising a rally scheduled for 3:30 p.m. on June 22. Prior noted that the board meeting had been moved up to 4 p.m. from its usual 6:30 p.m. start. Prior also tweeted June 17 that the registration for comments had been opened a day earlier than the policy on the LCPS website stated it should be opened. Multiple tweets from Loudoun Democrats stated that they were funding a bus to bring people to a rally and to back the school board.

Step 1: Pay to bus in out-of-town activists to #loudouncounty school board.

Step 2: Open up public comment a day earlier than parents are used to.https://t.co/QwtfwBfVqS

The Daily Caller tracked the speakers during the public comment session of the June 22 meeting. During that session, 15 of the first 17 speaking, including the initial 11, backed the school board with regards to the policies. In total, 16 expressed support for the school board’s policies, 32 expressed opposition, and two were young children who thanked their teachers.

There you have it. The extreme antics of the LCPS School Board are a direct extension of the Loudoun Democrat unit committee – which at last report is still planning to ship radicals into the SB meeting today. https://t.co/bkSsacZMYj

The Daily Caller obtained a June 1, 2020, email written by Robin Burke, the chair of the education committee for the NAACP Loudoun Branch, to a number of participants, including Loudoun County school board chairwoman Brenda Sheridan via her official LCPS email. Burke urged Sheridan to use her power as chairwoman to remove John Beatty as chairman of two committees: the Discipline Committee and the Equity Committee. A post by Parents Against Critical Theory on June 22 claims Beatty was removed from the committees June 2, 2020. As of June 23, Beatty has other committee assignments.