A group of Republican lawmakers sent a letter to National Institute of Allergy and Infectious Diseases (NIAID) director Dr. Anthony Fauci Tuesday demanding answers on the agency’s abusive testing of drugs on dogs.

The Congressmembers, led by Pennsylvania Rep. Scott Perry, sent the letter following a report from the Daily Caller earlier in August detailing a grant from the NIAID to researchers at the University of Georgia last year for abusive and potentially unnecessary experimentation on beagles. They request that Fauci answer whether these experiments are still ongoing, how many dogs have been killed, who authorized the tests, why they are being conducted and how much money has been spent on them to date. 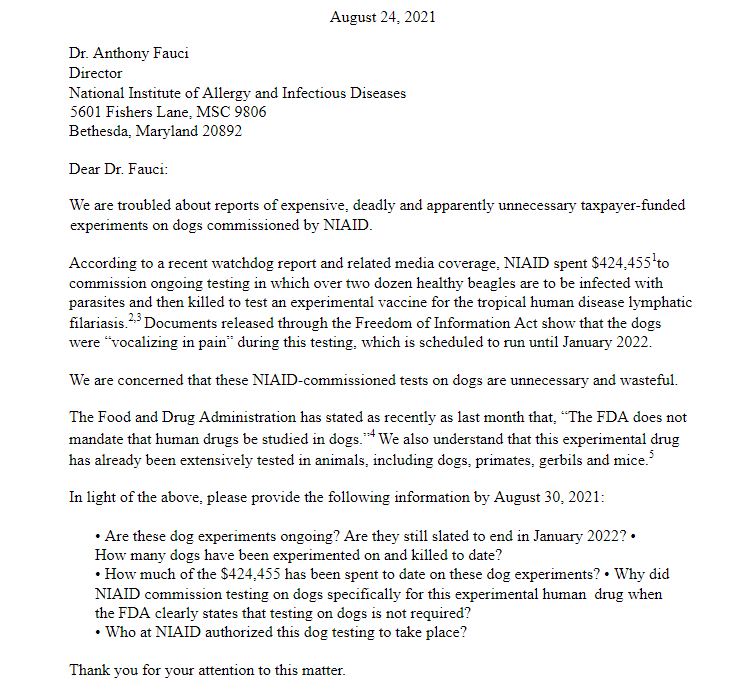 The tests were uncovered by the government watchdog group White Coat Waste Project, which has reported extensively on unnecessary and harmful animal testing done by government agencies. The University of Georgia experiment involves giving beagles an experimental drug after infecting them with a disease-carrying fly, only to euthanize them at the end of the study, according to government documents obtained via a Freedom of Information Act request.

“We are troubled about reports of expensive, deadly and apparently unnecessary taxpayer-funded experiments on dogs commissioned by NIAID,” reads the letter from the GOP lawmakers. “We are concerned that these NIAID-commissioned tests on dogs are unnecessary and wasteful.”

Some scientists have said that the beagle tests being funded by NIAID are unnecessary, as the experimental drug in question has already been tested extensively and been proven safe and effective. “The Food and Drug Administration has stated as recently as last month that, ‘The FDA does not mandate that human drugs be studied in dogs.’ We also understand that this experimental drug has already been extensively tested in animals, including dogs, primates, gerbils and mice,” reads the letter from the Congressional group.

Fauci, and the National Institutes of Health (NIH) at large, have been under increased scrutiny in recent months over what types of animal testing the government is funding as interest in the “lab-leak” theory of COVID-19 origin has increased. Some have speculated that the pandemic may have accidentally emerged from research being done at the Wuhan Institute of Virology on bats, funded by an NIH grant.